OPPD to accelerate streetlight replacements in 2019 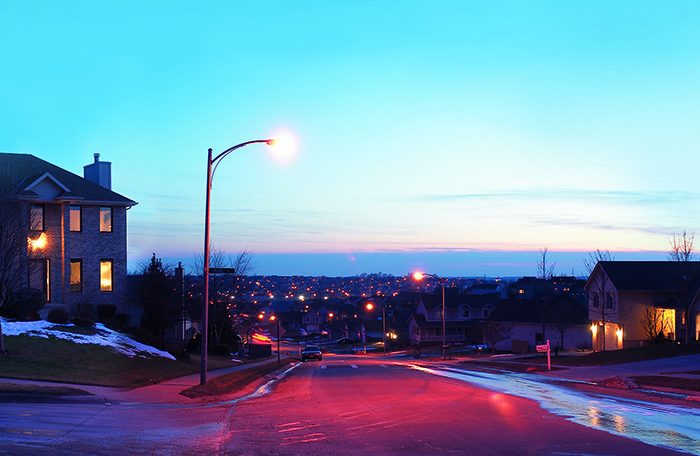 Beginning in April 2019, OPPD will accelerate the replacement of streetlights with new LED fixtures. The utility will convert streetlights on major roads in addition to routine customer outages.

For the next five years, OPPD and its contractors will replace 20,000 incandescent streetlights with LED fixtures per year. After the first two to three years of the program, streetlights along all major roads should be complete. At that point, crews that had been working on major roads will look for areas with replacements near completion and infill with new fixtures where needed.

More specifically, OPPD will replace 7,000 streetlights fixtures on major thoroughfares in April through June. These types of roads are not highways and interstates in the metro area, but rather main roads such as 72nd Street, Harrison Street and Ames Street.

OPPD currently repairs approximately 11,000 customer-reported streetlight outages per year using three crews. The utility will increase those crews to a total of five to meet the higher volume of the LED replacements.

So far, municipalities that are OPPD streetlight customers have submitted priority lists of major roads in their cities and towns that crews should target for replacement. Some smaller towns, such as Rulo and Peru, have had all streetlights switched to the new LED fixtures.

Todd McLochlin, manager of Utilities and Right of Way Coordination at OPPD, said in those instances, because the towns have a small number of streetlights, it was more efficient to replace all of the fixtures in town rather than travel to replace just one.

OPPD representatives have been in touch with municipalities, counties and other streetlight customers since September 2018. OPPD personnel briefed these customers on the transition process to move from high-pressure sodium fixtures to LED fixtures.

Since late January 2019, OPPD installed the LED streetlights one at a time as they burned out rather than install miles of streetlights at once. McLochlin said installing single fixtures this way “utilizes existing maintenance cycles and provides a fair and non-discriminatory process for selecting the order in which the fixtures will be converted.”

The streetlight conversion plan began after evaluating three scenarios. They were based on the value to customers in terms of environmental impact, customer satisfaction, financial impact and technological advances. OPPD determined a five-year conversion to LED in conjunction with lamp replacement would best meet these criteria.

After many years of collaborating with streetlight customers, they have come to rely on OPPD to provide expertise, not just in streetlight restoration, but also with knowledge about the latest technologies and design concepts.

A total of 98,744 streetlights cover the roads and highways of OPPD’s 13-county service territory. By converting to LED fixtures, municipalities contracting with OPPD will see a 25-percent reduction in their overall streetlight costs. Other benefits include:

Just in time for summer, this month Energy Advisor Eric BenSalah explains what you really need to know about HVAC filters.

There are a few simple things you can do to help lessen the weather's impact on your energy usage.