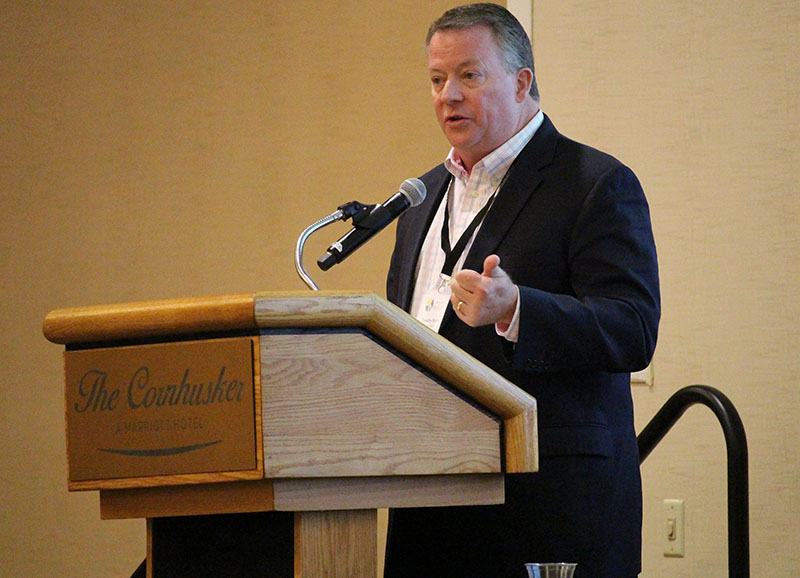 For years, wind announcements have overshadowed solar at the conference, with Nebraska often cited as one of the top states in the country for potential wind energy generation. In 2018, Nebraska ranked 13th in state rank for share of electricity from wind, according to the National Renewable Energy Laboratory. More than 14% all in-state electricity production came from wind.

And make no mistake, more wind is on the way. Another 566 megawatts (MW) is under construction, and 496 MW under advanced development.

But solar was a big topic, especially at the CEO round table. Burke walked attendees through OPPD’s Power with Purpose program, which features between 400 and 600 MW of proposed solar generation.

Burke said OPPD’s plan also includes replacement modernized gas backup, refueling some of OPPD’s coal assets with natural gas, and grid voltage support devices. The plan goes before the utility’s publicly-elected board on Nov. 14 for a vote. The board could approve a final recommendation and authorize management to negotiate and enter into contracts.

Burke acknowledged several of the utility’s board members who were also in attendance at the Oct. 29 round table.

He said the proposed deals with a changing generation and customer landscape. It is part of a larger journey that has been going on at OPPD for a number of years.

He said OPPD’s area continues to grow, citing critical infrastructure such as Offutt Air Force Base and others.

“We have a changing energy landscape that we have to respond to,” Burke said. “If you go from Sioux City to Kansas City, there have been significant changes in baseload generation.”

He listed a number of generating stations that have either been retired or retrofitted to run on other fuel sources.

He cited the need to maintain reliability and resiliency as well as satisfy legal regulations around electric utilities. These regulations call for, among other things, guaranteeing a supply of power over 12% of the utility’s highest level of peak demand.

Burke said the June 2017 storm was an example of the need to maintain reliability and resiliency.

“Two tornadoes just south of me in Sarpy County took out six transmission lines,” he said. “That created some resiliency-related issues so we hardened some of those assets and found other ways to move power around our system and maintain that resiliency and reliability. But that’s just what utilities do. This is longer term generation reliability and resiliency that we are identifying and planning for.”

The gas modernization OPPD is proposing, along with the new solar, would allow those units to come online much faster to respond to market changes rather than the long lead-up current units need to come online. With Nebraska’s unpredictable weather and events like last spring’s historic flooding, generation that can quickly respond to system challenges is vital.

OPPD’s solar plans weren’t the only ones in Nebraska. This summer, a New York developer announced plans to build a 230-MW solar facility east of Lincoln.

Burke also detailed upcoming work at the utility, including decarbonization and a goal of being a net-zero carbon utility by 2050.

“As you can see, we don’t have a lot going on at OPPD,” Burke said, ending his presentation to laughter from the crowd.

The conference is a two-day event that draws more than 300 business executives, community leaders, utility representatives, and members of academia  and the renewable energy industry to Lincoln.

Burke wasn’t the only OPPD leader to participate: Aaron Smith, director of Operations, spoke on the topic of “How does Nebraska renewable energy fit into the Southwest Power Pool;” Kirk Estee, Customer Alternative Energy Solutions manager, spoke about “The Growing Impact of Electric Vehicles on the Grid;” and Courtney Kennedy, manager of OPPD’sAlternative Energy Program, spoke about “Community Scale Renewable Energy.” Kennedy also moderated several sessions during the conference.

Community solar facility up and running for OPPD customers

OPPD’s sold out Community Solar program went live last month, a project that was two years in the making.

The utility’s Board of Directors approved pursuing proposals that would add both solar and natural gas generation to OPPD's portfolio.