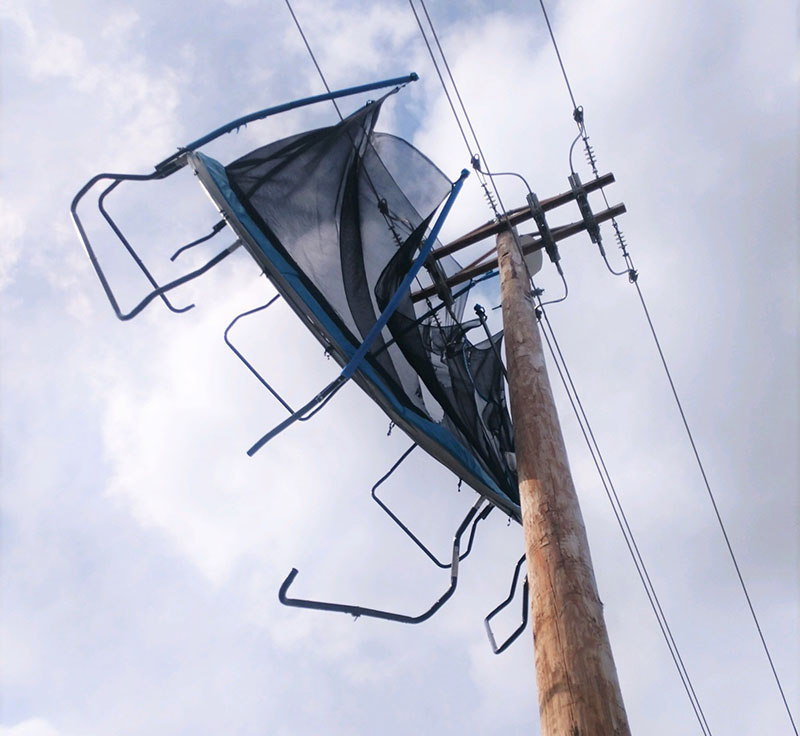 When a wind storm or thunderstorm moves through, and a trampoline is not properly staked into the ground, the wind can blow it into power lines. And because trampolines are made with aluminum, removing them safely from lines can be tedious. When a line technician encounters a trampoline in a line, they often end up cutting it in half.

Just recently, OPPD personnel were called to an outage caused by a trampoline that was lifted by wind into power lines. Here are some tips for properly grounding the trampolines so they don’t become airborne:

How does it work?

When a foil balloon, or trampoline, which have metal components, touches a power line, it can cause a surge of electricity that shorts out circuits or other electrical equipment near the line. These shorts can cause fires and outages.

One OPPD troubleshooter said balloons are the equivalent of tossing an aluminum foil ball into a power line. Troubleshooters often encounter the balloons after they have become tangled in higher voltage transmission lines.

Sometimes, a foil balloon can sit among the power lines and not cause a fault or outage. But when a line technician tries to remove it, the balloon could move and short out the circuit. In some instances, the same balloon can trip a circuit over and over again.

Customers often call in obstructions in the lines, even when there isn’t a power outage. Other times, OPPD troubleshooters patrolling a line will encounter the objects.