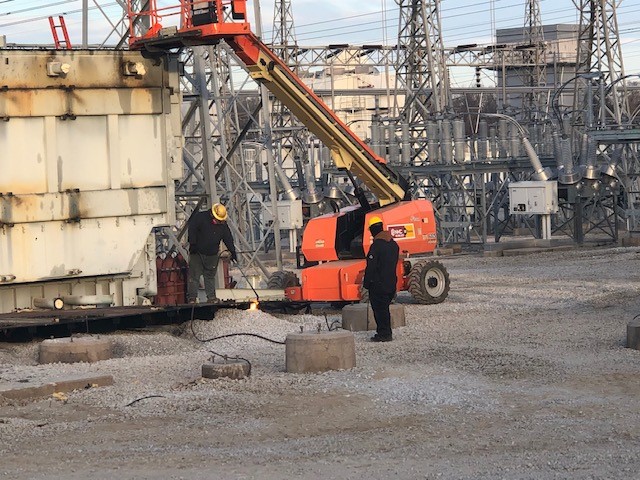 An auto transformer is a kind of electrical transformer with only one winding as opposed to primary and secondary windings. The transformer replaces what was thought to be OPPD’s largest and oldest transformer in the Transmission & Distribution system.

Transmission & Distribution project manager Teddy Hutchinson said the transformer was approaching “end of useful life.” Transformers are frequently tested throughout their life cycle. Some of those tests include looking for abnormal levels of combustible gases – which the transformer had begun to show – an indicator the transformer needs replacing.

The transformer is a critical for the 161-kilovolt (kV) transmission system that it feeds from the 345-kV system. It is essential to plan the replacement of the transformer rather than run it to failure, Hutchinson said.

“The benefit of knowing we are going to do this again is helping us learn for the next moves,” Hutchinson said.

The auto transformer came from Hyundai Power Transformers in Montgomery, Ala., into south Omaha by rail. Then it moved during the middle of the night so as to cause minimal traffic disruption.

Moving the transformer to the substation required a massive trailer, typically one truck pulling the trailer and two trucks pushing it. It’s a slow and meticulous drive due to size and weight. This transformer weighs approximately 535,000 pounds.

Upgrades done to the switch gear and other equipment will accommodate the new transformer. Personnel from OPPD’s Transmission Planning, Substation Engineering and Protection and Automation Engineering departments provided analysis for the replacement.

OPPD ordered the transformer in 2018, and planning the work took several years.

OPPD built a temporary storage pad at the substation to hold the new transformer, which will move to the permanent foundation in January.

An added bonus – OPPD recouped money on the project due to the value of the materials. The vendor, A-Line EDS from Waterloo, Iowa, recycled the copper windings, core steel and tank steel. They also transported more than 40,000 gallons of oil to a reprocessing facility.

The next auto transformer replacements are scheduled for 2021 and 2023. Planning has already begun, Kramer said.