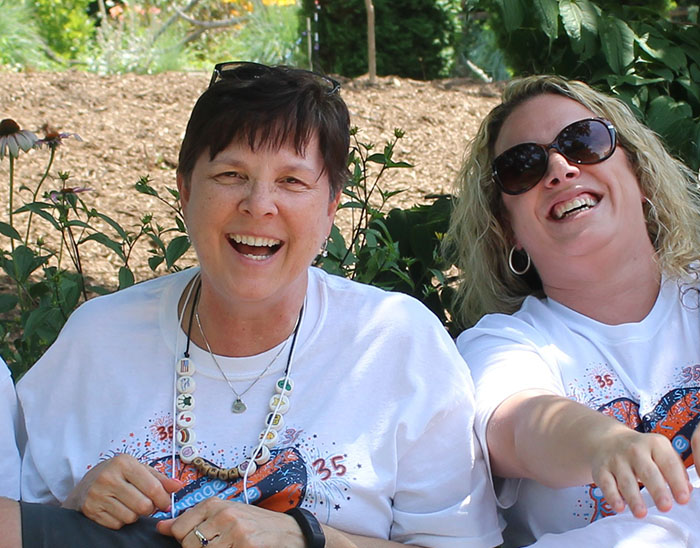 Every minute spent at Camp CoHoLo has been a blessing for OPPD’s Berta Ackerson. A combination of coincidence and urging by a friend led her volunteering at the camp for kids with cancer or blood disorders.

Camp CoHoLo, now in its 35th year, is for children newly diagnosed, though many return campers have been in remission for years.

Ackerson, who has been at OPPD for seven years, like anyone who has seen a loved one battle the disease, knows more about cancer than anyone wishes they had to.

At 19, she lost her 18-year-old brother to the cancer. Years later, her sister, a mother of three, also died from the disease.

“I didn’t want to do it at first, I didn’t think I could do it,” she said, citing the memories of her brother’s cancer, no longer fresh but still painful. “But a good friend, who was the camp director at the time, urged me to do it. She said it was something I needed to do. And I was raised that if you ‘have,’ then you have to give back.”

CoHoLo stands for Courage, Hope and Love. Those words also serve as the camp’s guiding principles. Because those are the things the volunteers – a third of whom are former campers – try to give to the campers. And just as importantly, she said, that’s just what the campers give back to the volunteers. 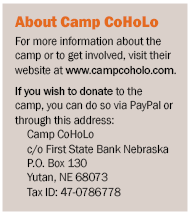 Ackerson, the volunteer camp director, has volunteered there for 30 years. She was a member of the now-defunct Variety Club of Nebraska, and they sponsored the camp. With her friend’s urging, she gave it a day. That’s all it took. She was hooked, and has been back every year since.

She makes it clear that the camp is a place of happiness and laughter. A place of belonging.

While it is primarily for the newly diagnosed, some campers have been off treatment since they were 2 years old, yet return every year.

“Their being there allows the kids who are on treatment to see the light at the end of the tunnel,” Ackerson said. “And the ones who are off treatment were once here with the bald heads, the scars, the bump where the port is; so it’s no big deal to them. They are all normal when they come here, and that’s our mission.”

The camp is held at the Eastern Nebraska 4-H Center near Gretna. There are two sessions, typically at the end of July, one for children aged 6 to 11 and the other for children 12 to 17.

This year there were more than 150 campers. September is National Childhood Cancer Awareness Month. This year was tough, Ackerson admits. Three campers died within a month of camp beginning.

They zip line, swim, have cookouts and do everything other summer campers get to do, with a medical staff on hand 24-7. She said they have great support from Children’s Hospital and Nebraska Medicine, where many of the children receive treatment.

Ackerson, the Security Access and Fitness for Duty Lead at OPPD, said the nurses, physicians and other staff at the hospitals talk up the camp all year long to the families, encouraging them to go. Several of those staff members also volunteer there, along with people from all walks of life.

It’s important for the families for a number of reasons, she said.

“It’s great for the kids, to see them smiling and having fun,” Ackerson said. “But it’s important for Mom and Dad, too and the rest of the family. It gives them a break from the hospital, a chance to reconnect with those siblings who don’t always get the attention they need.”

She said some of the kids know they won’t be around next year. There is a sense they have, she said. She and others have seen it at the camp. She saw it in her own brother during his last year.

“Their little bodies go through so much, but they have no fear,” she said. “No fear about anything. To see them on a zip line, dealing with a fear of heights, and to come away from that yelling ‘I’m invincible, I can do anything!’ They help us, they help their families get through it. That’s what my brother did for us.”

She calls the camp “Nebraska’s best kept secret.” She said they are always looking for more volunteers, especially men. And there is always a fundraising need. So far, they’ve never had to turn a child away. Ackerson said their goal is to keep it that way.

She looks forward to seeing the kids and the volunteers every July, sharing in their stories and helping make memories at Camp CoHoLo.