Retiree reflects on a lifetime of service 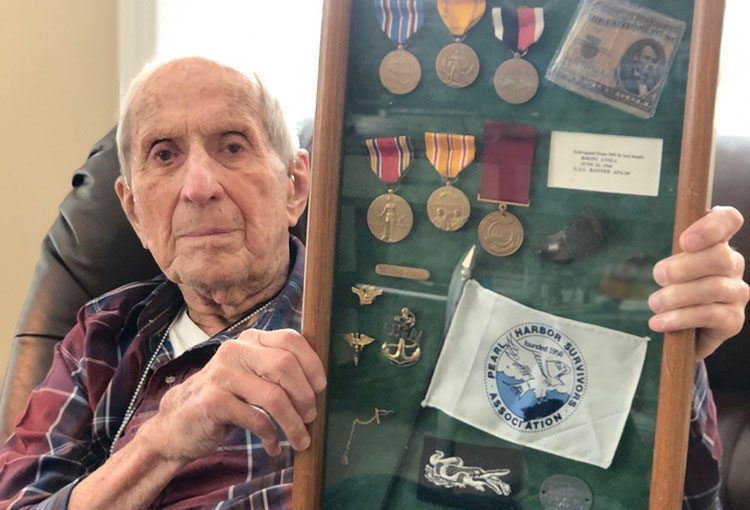 He carried the five-dollar bill with him for more than three decades.

For four full days after the December 1941 attack on Pearl Harbor, then 23 year-old Ed Guthrie had the gruesome duty of pulling bodies from the oil-soaked water. When he saw a lone five-dollar bill floating by, he put it in his wallet to carry as a reminder of that life-altering experience. It was only in the 1970’s that his wife Janet put the crumpled silver certificate under glass for preservation.

Ahead of this year’s Veterans Day observation, Ed and Janet shared reflections and anecdotes about living through infamy.

They’ve been married for 70 years, and sitting with them for a conversation, one can’t help but grin when they talk. Ed doesn’t hear too well anymore – he celebrated his 100th birthday in July – so Janet helps finish his sentences, and peppers the talk with fascinating color commentary.

At 91, Janet is sharp and funny as she talks about the letter the couple recently received in the mail, inviting them to return to Hawaii in December. Organizers asked the two to take part in the 77th anniversary observation of America’s entry into the Pacific fight of World War II.

“It just takes so much to get there,” she said, speaking about the logistical challenges of wheelchairs, luggage and the like for a nearly 12-hour, two-leg journey to Oahu. “We’ve made it there for a couple events, but I just don’t think we can do it anymore.”

It’s understandable – they’ve shared their story many times before – so Ed and Janet will remain in their comfortable assisted living apartment in Bennington.

Well-wishers and a small army of family members often visit, although their grandkids could stand to stop by more. They regularly host amateur and professional journalists wishing to tell their story, like this one centered on Veterans Day.

2018’s holiday is distinct, with November 11 marking the 100-year anniversary of the armistice that ended World War I. Ed was only a baby then, but his century of life has spanned an entire history curriculum’s worth of events.

The birth of the atomic age is one standout. After the bombing of Hiroshima and Nagasaki ended America’s war with Japan, the United States worked to better understand the nature of atomic weapons.

In 1946 Ed was stationed on the USS Banner (FS-345), an attack transport vessel, at the Bikini and Enewetok atolls near the South Pacific’s Marshall Islands. In preparation for the tests and to help limit their exposure to resultant radioactivity, he and his shipmates rotated every 15 minutes, watching from the deck as two bombs were detonated in the distance.

Janet helped share the story of how one bomb was intentionally slid underwater from the deck of a decommissioned aircraft carrier. The force of the explosion lifted the entirety of the massive ship into the air.

Ed still has two pieces of shrapnel he collected from the test area.

Those fragments are framed and sit alongside colorful medals, service pins, faded photos and other memories from an impressive lifetime of service. A toy OPPD truck sits on a corner shelf, given to him as a token of gratitude for his service to the utility.

Ed was an electrician with OPPD’s Transmission & Distribution group for 34 years, following in the footsteps of both his father and grandfather.

“People couldn’t afford school,” he and Janet shared. The U.S. Navy’s vocational training he attended in Michigan before the war eventually led him to earn the rate of Chief Electrician’s Mate. His first assignment was aboard the USS Whitney (AD-4), a destroyer repair ship, beginning in 1941. As the war progressed, he was transferred to the Banner.

He served six years in total, honorably leaving the Navy after the war. He returned to Nebraska to work as a commercial electrician. Once he joined OPPD, he found camaraderie reminiscent of his time in uniform.

Ed roller skated, one of his longtime passions, golfed and participated in bowling leagues. He regularly knocked down pins alongside both OPPD’s blue collar and white collar workers. That blending helped him learn about other parts of the company, and it fostered a real sense of community.

Following his OPPD career, Ed and Janet stayed connected to the utility through the retiree’s club, which they helped establish.

Their military and civilian connections continue to this day. Four of Ed and Janet’s extended family served in the military. One family member, Adam Staebell, currently works for OPPD as a mechanical maintenance supervisor at North Omaha Station.

OPPD proudly recognizes Ed for his lifetime of service to the country and the district, and honors Janet and the entire Guthrie family for their years of selfless support.