Emerald ash borer update: Here’s what you need to know 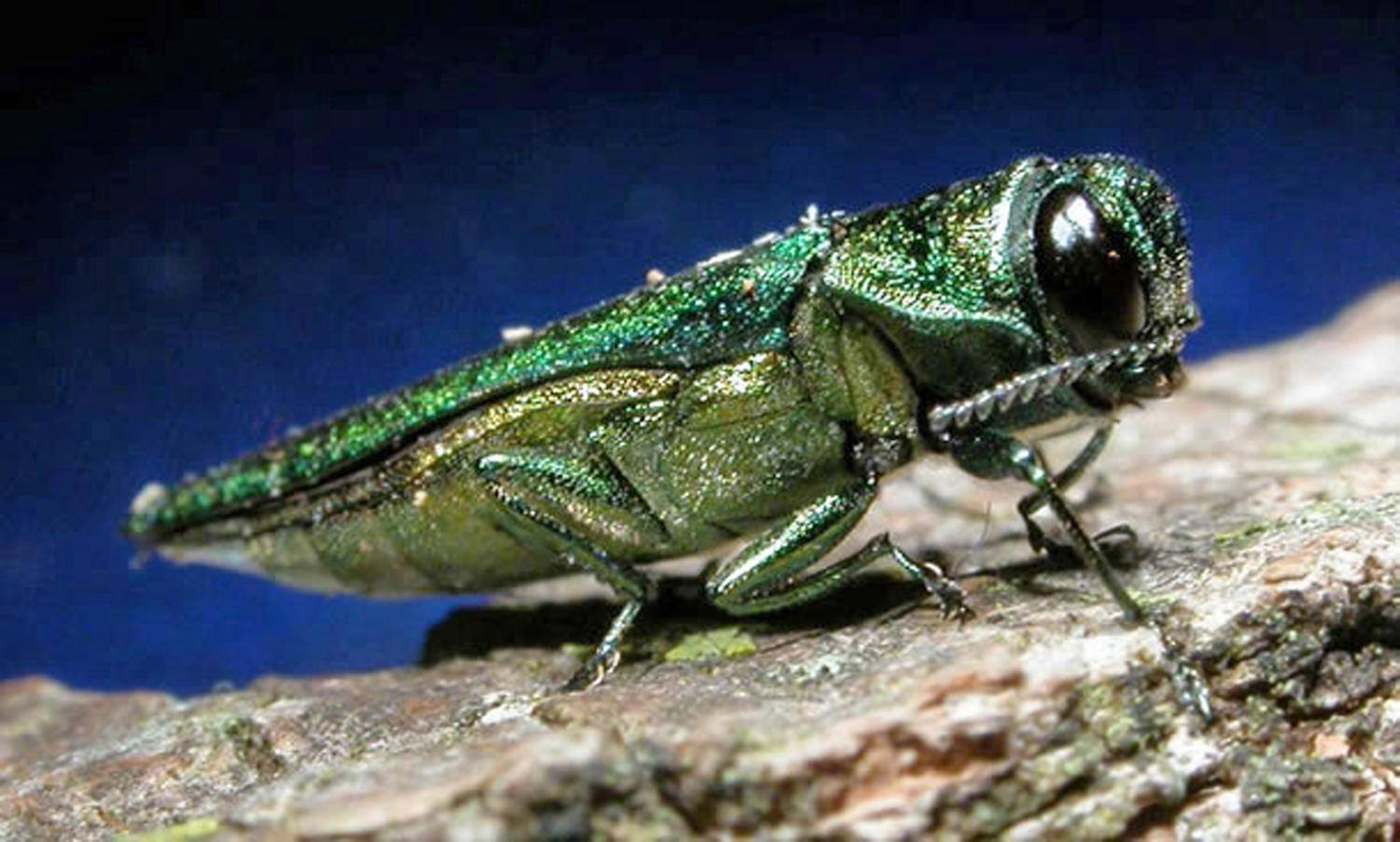 The emerald ash borer (EAB) made headlines when it was first identified in Nebraska, found June 6, 2016, in eastern Omaha.

“The trees in the area where EAB was first found are declining at an alarming rate, to the point that many of the infected trees were removed,” said John Wynn, city forester for Omaha.

Since that time, the invasive tree-destroying bug has made its way to the western part of the city and beyond. Borers appeared in Washington, Seward and Hall Counties in 2020. And just this past August, it was discovered in Columbus, in Platte County.

“Studies show the population of the EAB beetle will spike the seventh year after they were first found in a city.” Wynn said.

They won’t be visible this time of year, but Wynn says they will emerge from their trees to mate in late May or early June. Female borers lay between 90 and 200 eggs in the cracks of tree bark. Those eggs will hatch within three weeks, and the larva begin to do their damage to tree tissue.

“This weakens a dead or dying tree and makes them prone to breakage at the base,” Wynn said.

“If those trees fall onto power lines, they can cause a lot of damage to the electric system,” said Mike Norris, utility forester for Omaha Public Power District. “And it’s a serious safety issue, as well. We don’t want anybody getting hurt.”

For these reasons, OPPD forestry crews and contractors are closely monitoring ash trees in the course of their year-round tree trimming work.

Wynn’s crews are doing the same, removing trees that pose threats to public safety. But there are other concerns, as well.

“The City of Omaha is going to lose 14% of the city tree canopy,” he said. “The cost of these (tree) removals is expensive, so it is a budget buster for every city dealing with EAB.”

Biocontrol strategies are used in areas where EABs are present or suspected, said Jody Green, entomologist with Nebraska Extension

“Living organisms, in the form of natural enemies, have been bred and carefully released in the landscape to manage the pest,” she said.

In the summer of 2020, Nebraska Extension released three species of tiny parasitic wasps to help control EAB. The species were non-stinging and not harmful to humans.

“It will take several years to build up the population,” Green said. “But the larvae of these predatory wasps prey on EAB and over time will bring the population of these invasive beetles down.”

Meantime, home or property owners with ash trees should take action once EAB has been found within a 15-mile radius.

“The first step would be to consult with a certified arborist to have the tree evaluated to see if the tree is a good candidate for treatment (to prevent EAB infestation),” she said. “There are several options now, which have shown success in healthy ash trees.”

The best candidates for treatment have healthy roots, are in a good location, have an appropriate watering and care regimen, and are of high value to homeowners, such as providing shade, she said.

Green cautioned that successful treatment would have to be ongoing, for the life of the tree, which can become expensive.

Wynn encourages those who do not wish to treat ash trees to have them removed sooner rather than later. “Infected trees become brittle and unpredictable, which in turn, will increase the removal cost,” he said.

If tree owners choose to remove trees, Nebraska Extension recommends replacing them with with diversity in mind. This helps ensure that pests or illness among a particular tree species don’t threaten our overall tree canopy. The Extension’s list of good candidates for our area can help you decide what to plant.

Fall is a great time to plant trees. “But always call 811 before digging, to ensure you won’t make contact with underground wires,” Norris said. “And always be aware of overhead power lines.”

He also stressed the importance of planting “the right tree in the right place,” to avoid interference with electric equipment. Check out OPPD’s  guidance on choosing the right places to plant various types of trees.

Efforts by the state, the City of Omaha, other entities and individual customers over the past several years have helped “flatten the curve,” Norris said.

But the beetle has made itself comfortable in our landscape, and it doesn’t plan on leaving any time soon. 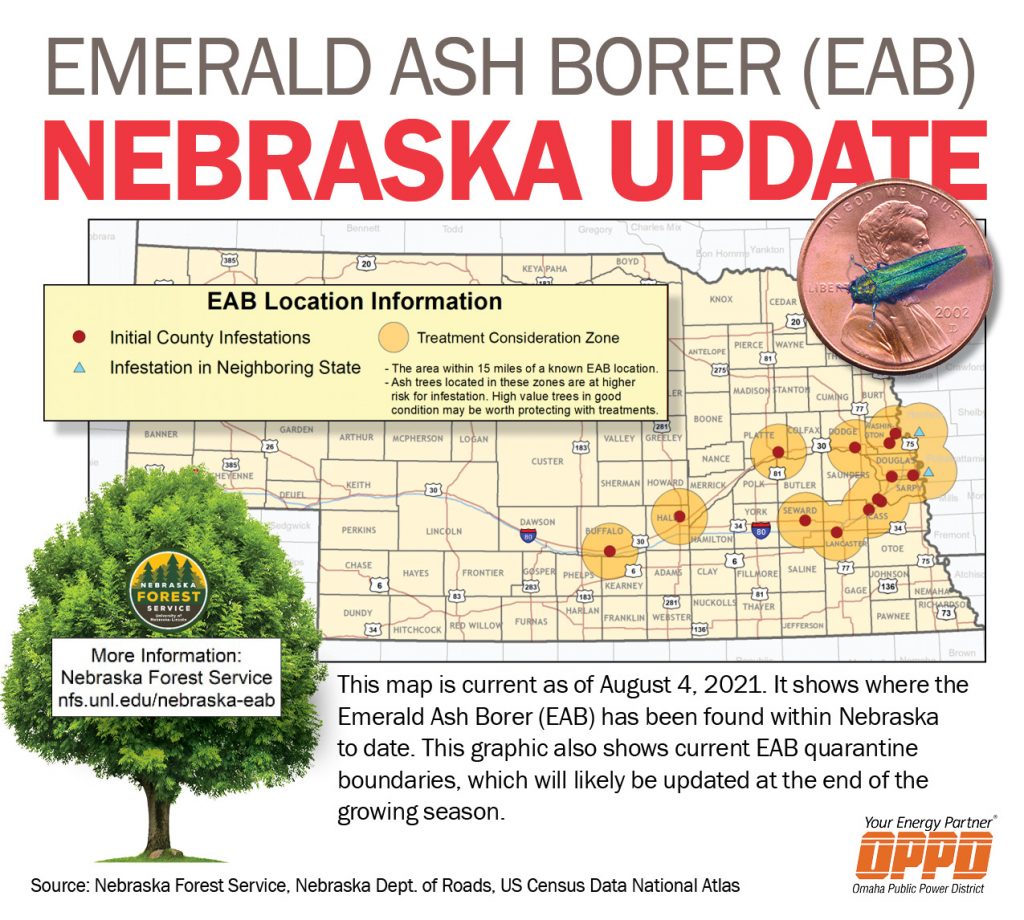