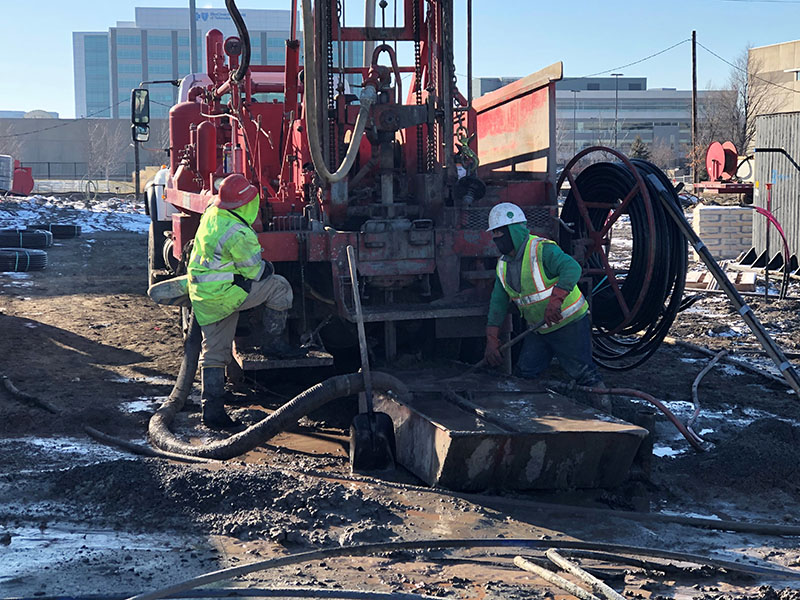 More than 100 holes dot a construction site around Mammel Hall.

Soon, tubing will wind through the holes to heat and cool a new addition to the building on the University of Nebraska at Omaha campus.

The project is an example of how commercial electricity customers utilize geothermal heating and cooling to reach their energy goals. OPPD has offered expertise in this area for decades, including testing potential building sites for suitability.

Nebraska is in a “sweet spot” for using geothermal technology, said Tim Rauscher, a senior field engineer at OPPD. The state’s location lets geothermal be its most effective and efficient thanks to the underground temperature.

“It’s all about ‘deep earth temperature,’” Rauscher said. “In this area, it is in the mid-50s, which allows the liquid in a geothermal system to be both easily cooled and heated.”

It all starts with a trailer in a cornfield.

Inside the trailer, a small-scale water heater, piping, gauges and a laptop, among other equipment, measure water sent 400 feet into the ground and back again through a looped system. The temperature of the water is measured as it returns to the surface – allowing equipment to calculate the deep earth’s heat exchange capabilities at the project site.

This loop and circulation system simulates how a full-scale geothermal system will work.

Geothermal systems are a popular option for commercial OPPD customers. The cost over the life of the system can be lower than a more traditional heating and cooling system, Rauscher said.

A typical geothermal system can last 25 to 30 years and be up to four times as efficient as traditional HVAC. Geothermal heat pump systems simpy move heat to and from the Earth in a series of liquid-filled underground pipes. An electric, water-source heat pump then sends the heated or cooled air to occupied spaces in the same way as a traditional HVAC system.

Over the years, OPPD has consulted with some of the utility’s larger customers to ensure they get the right system to meet their needs.

Schools are frequent customers of geothermal, Rauscher said. In the early years of the program, they were the primary users. Long-term building occupants like schools are great candidates for geothermal, he said, because they easily recoup the cost over the life of the building.

In 2006, two Millard elementary schools were the first schools in Nebraska to receive the Energy Star designation. The designation is national recognition for superior energy-efficiency performance. Those schools utilize geothermal systems.

Over the last two to three years, customers’ interest in geothermal is picking up, Rauscher said.

“Customers are more interested in sustainability and green energy. With OPPD’s increasing renewable footprint, electric heat can be considered increasingly carbon-free as we move toward that.”

For commercial projects, the first step should be that trailer in the cornfield to test land. In this case, the testing was for a new school for Lincoln Public Schools. OPPD provides testing services for customers in many areas of eastern Nebraska, including the state capitol building in Lincoln. OPPD performs approximately 10-15 of these tests every year.

The testing will run for three to four days, powered by a generator in the trailer. Once the results are in, OPPD provides valuable information that helps building owners, contractors, engineers and architects design cost-effective geothermal HVAC systems. This allows customers to heat and cool their buildings with the Earth for years to come.