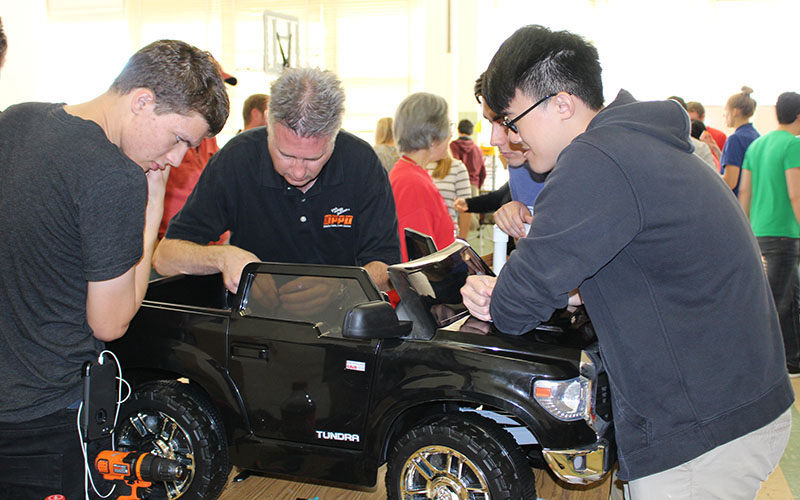 Rob Christianson couldn’t wipe the smile from his face as little Piper Smith cruised the Munroe-Meyer Institute hallways Saturday in a red toy car modified especially for her.

“That’s about the best pay you can get for a morning of work,” said Christianson, an injury prevention specialist at Omaha Public Power District.

Christianson was one of six OPPD employees who volunteered Sept. 28 as mentors and mechanical experts. They helped about 70 other volunteers at a Go Baby Go Omaha chapter event at the University of Nebraska Medical Centers’s Munroe-Meyer Institute (MMI). Cole Galloway, PhD, from the University of Delaware developed the Go Baby Go program.

During the event, volunteers modify electric toy cars to accommodate immobile children who may not be capable of activating an accelerator with their feet. One method of altering the cars includes using an easy access switch, which makes the cars go with a light touch.

Galloway was on hand at Saturday’s event to watch the magic unfold as strangers came together for the benefit of 11 special needs children and their families.

MMI’s gym transformed into a learning design lab as multidisciplinary teams worked together. Atop each of the 11, long tables sat a toy car frame, battery components, wheels, PVC pipes, foam and other parts needed to adapt the vehicles for the children. The buzz of power drills and clank of tools filled the room during the first three hours of the morning.

Teams had three hours to assemble the cars. Students took turns working on them, devising solutions for their driver’s special needs. The OPPD volunteers kept busy; students sought them out for advice to get the cars ready for the children to test-drive by 11 a.m.

As that time neared, Bergman looked at the underside of a little red sports car to help secure parts, while Matt Taylor helped tuck in wiring.

Paul Vovk tugged the seat support of a mini fire engines to make sure it was secure. He later moved to another table to help install a battery in a miniature black Tundra pickup. Creighton occupational therapy students explained how that model had space in the pickup bed for the child’s medical equipment.

“I really felt like I made an impact,” said Vovk, a senior design engineer for OPPD.

“People see kids in the community using these adapted cars, and they get hooked,” said Joanie Bergeron, physical therapist and certified pediatric clinical specialist at Munroe-Meyer Institute. “Many of them have participated in the past.”

Bergeron said they established the Go Baby Go Omaha chapter in 2016 and have done a couple of builds each year. A grant from the University of Nebraska Foundation ensures that families receive the cars at no cost.

“We are seeing cognitive changes in the children who get these cars,” Bergeron said. “Changes occur in the brain in how the children perceive the world, and brain scans show the changes.”

Not only do these adapted vehicles allow the children to get around on their own for the first time, but the cars also provide a means for socialization.

“We are putting some of these vehicles in classrooms, including two-seater cars, which are really powerful, too, allowing for a friend to ride along,” Bergeron said.

Omaha’s Go Baby Go chapter is one of 70 across the county. In recent years, the chapters have built about 8,000 adaptive cars. Galloway, however, said there’s a need for 30,000 cars a year.

Pediatric wheelchairs carry a $25,000 price tag; it only costs about $500 to adapt these cars.

OPPD senior nuclear design engineer Jim Geschwender appreciated all of the effort that went into the event. He also had a special understanding of how the parents of the children must have felt.

Geschwender’s daughter is in a wheelchair. Over the years, he’s made adaptations for her.

“It’s amazing to see kids smiling and lighting up when they get their cars,” Geschwender said.

View all posts by Paula Lukowski >
< Previous Article Next Article >

The utility was recognized by U.S. Veterans Magazine as part of their 2020 Best of the Best honors.