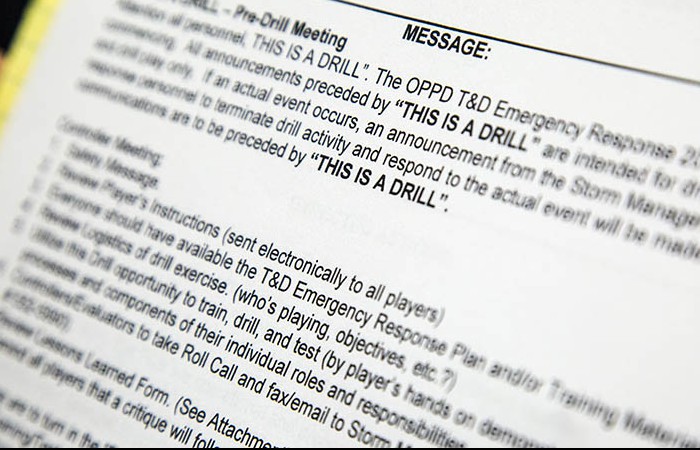 Severe storms take thousands of OPPD customers off the grid.

Lightning and flooding cause an evacuation of OPPD’s downtown headquarters.

A vault fire causes extensive damage to the downtown network.

Over the course of less than a day, OPPD employees faced all these challenges.

But it was only a drill.

OPPD holds a storm drill every year. It has been a mainstay of the utility’s preparedness since the 1997 October snow storm that brought down tree limbs and power lines across the city. That storm left customers without power for more than a week and prompted major improvements to the utility’s communication about and response to large-scale outages.

These annual practice sessions allow employees to identify strengths and weaknesses and make improvements where necessary. The latest storm drill involved more than 80 employees from across the utility. They practiced their respective roles as realistically as possible to prepare for actual widespread outages.

“The drill provided many opportunities for learning,” said John Mohler, manager of OPPD’s Syracuse Service Center. Mohler served as an organizer and controller for the latest drill. “It fostered a culture of continual improvement.”

The imaginary disaster scenario started a day before the actual drill, with a warning that severe weather, including tornadoes, would be moving into eastern Nebraska. The drill was on.

Crews began safety and equipment checks, ensured vehicles were gassed up and ready to go, and arranged additional personnel to be on standby, ready to report to work, if needed. All of these are tasks that happen when actual severe storms are forecast.

The “storm” struck in the early morning hours, and by 6 a.m., had theoretically knocked out power to 132,000 customers.

Additional crews were “called in,” including troubleshooters to find specific outage issues, and forestry teams to clear tree limbs and debris. Human Resources addressed a variety of employee and contractor needs. Communications personnel crafted internal messages, stories and updates for a drill site version of the Storm & Outage Center, as well as media advisories and news releases.

Crews were reminded of the need to put their safety and the safety of customers first and to prepare to find shelter. Simulated flooding and lightning caused mock evacuations of Energy Plaza and OPPD’s Blair Service Center. Plans for relocating workers were discussed.

For this mock disaster, the estimated time it would take to restore all customers was eight days, with most of the repairs being scattered and tedious, including many door-to-door efforts to bring customers back one at a time.

It truly was a worst-case scenario type of event.

“The drill gave everyone involved a chance to review their responsibilities and improve on the processes that have been developed,” Mohler said. “This will better equip the district to respond to large-scale damages to safely restore service to our customer-owners in a timely manner.”

By the end of the drill, these challenges were met and improvements were noted for the next drill.

Or the next time a real event strikes.