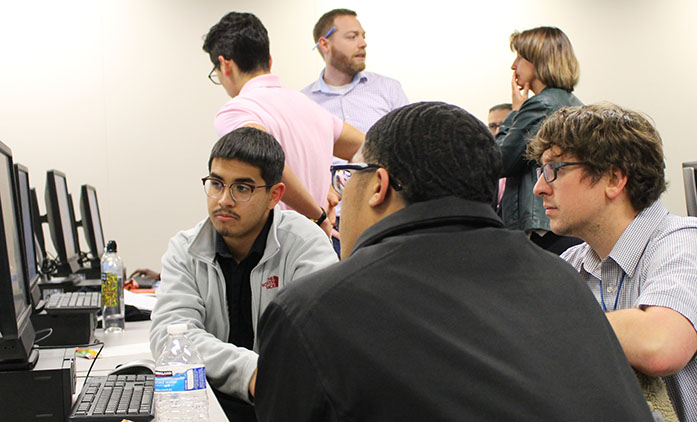 Davian Sayers – tall and flashing one of his high-wattage smiles – stood in line at North Omaha’s Heart Ministry, laughing with his friends. He was part of a volunteer group handing out turkeys and all the fixings for Thanksgiving.

eye to the future

Sayers attends Omaha North High School and has big dreams, despite coming from a family with its share of struggles. Spend a few minutes with him and his fellow volunteers – all high school seniors – and you learn having limited means doesn’t mean they allow themselves to be limited.

The energy industry, architecture, construction, Sayers wants to do it all. And through his involvement with a group called Legacy I³, which OPPD was instrumental in bringing to Omaha, Sayers’ future looks bright.

For Sayers and 17 other Legacy students, it’s a future that includes OPPD.  Legacy started in Phoenix to attract, train and retain local, diverse talent, which was attractive to OPPD.

Some of Omaha’s largest companies are looking to join OPPD in the coming months in partnering with Legacy, the brainchild of former nuclear plant operator and Navy veteran Deon Clark.

Clark was born and raised in a Chicago neighborhood plagued by violence and poverty. One of Clark’s brothers is in prison and a sister was recently released. At 17, Clark scored high on the Navy’s aptitude test and enrolled in its nuclear training program.

He left the Navy at 26 and landed a six-figure job as a senior nuclear reactor operations instructor, despite being a year away from earning his bachelor’s degree.

“There was nothing special about me or my upbringing,” said Clark when asked about Legacy’s origins. “But the critical thinking process that I use to make decisions and process information is what got me through. If we can teach students the true skills of critical thinking and how to be successful and not just tell them that they can be successful, then they can do it despite their circumstances.”

Clark said students in the program learn the ability to think critically, learn the long-term consequences of their decisions, how to avoid peer pressure and how to be loyal to their family, but with the right perspective.

The Legacy model calls for an employer to commit to providing internships and jobs along with the mentoring and hands-on involvement of its employee ambassadors. It also requires a large commitment from the students and ambassadors. There are meetings on Tuesdays and Thursdays and events on Saturday mornings. Clark said a number of other organizations and groups also help support the students, including local government, schools and service organizations.

“I thought about how much of our talent comes from South Omaha and North Omaha, and it is limited,” Cooper said. She saw an opportunity to bring Legacy to Omaha.

That opportunity came a year later.

OPPD CEO Tim Burke was settling into his new role and looking for a signature program that could have lasting impacts in South and North Omaha.

Clark soon met with OPPD’s senior management team and work started to secure commitments from various community partners to support the Legacy students and their families.

Cooper said Legacy’s students become ambassadors for OPPD in their communities after a positive experience with the Legacy program.

“OPPD as a company took the lead to do something impactful, not just for our company, but for our whole community,” she said. “We are getting qualified candidates that better reflect the community we serve, which is increasingly becoming more diverse.”

Burke said some college graduates receive their degree, but it doesn’t match with the employment needs in the community. With Legacy, the students are becoming well-versed on OPPD and the energy industry well before entering the workforce. It’s also a clear way for OPPD to carry out one of the organization’s core values of honoring the community.

“When I heard about Legacy, I thought, ‘We can really impact our organization and make a difference in the lives of these kids and the lives of the people in the community,’” Burke said. “We can be a real partner with the parents of these children and help them in a way they can’t. What a way for us to lead the way we power the future. These kids have all the capabilities in the world and we are helping them get there.”

Michelle Homme and Jaron Cannon are the Legacy employees who work with the Omaha students. The students meet two days a week at Metro Community College’s Fort Omaha campus. There they discuss issues including relationships, professionalism and etiquette.

On Saturdays, students take part in “learning by doing events,” like the event at Heart Ministry.

One Saturday event, called “Real Money – Real World,” allowed students to pick a real job based on their interests. They received a hypothetical starting salary and visited different “vendors” (OPPD employees) who represented areas on which the students must spend their paychecks: housing, food, transportation, utilities and other expenses. The event was a crash course in budgeting.

In January, the students will transition away from working with Legacy staff to working more closely with OPPD ambassadors. This will enable them to learn more about the energy industry and actual jobs at the utility. They will graduate from Legacy in May, then enroll in local colleges or universities and begin their OPPD internships.

“OPPD is setting a precedent and saying to the community, ‘If you want to keep your talent here, this is what you might want to do,’” Homme said. “OPPD has embraced us and these kids continue to amaze me. I always believe if you give someone the chance to shine, they will. Legacy and OPPD are giving them that opportunity.”

Next month, Davian Sayers will have a unique opportunity. At the “Real World – Real Money” event he told Burke “I want to know what you do.”

Burke invited Sayers to spend a day shadowing him. Quite the opportunity for a high school senior, spending the day with his future boss. But for Sayers and other Legacy students, you get the feeling that big things are just starting to happen.

Everyone wants to save money on their energy bill, but how much can you save by unplugging electronics?