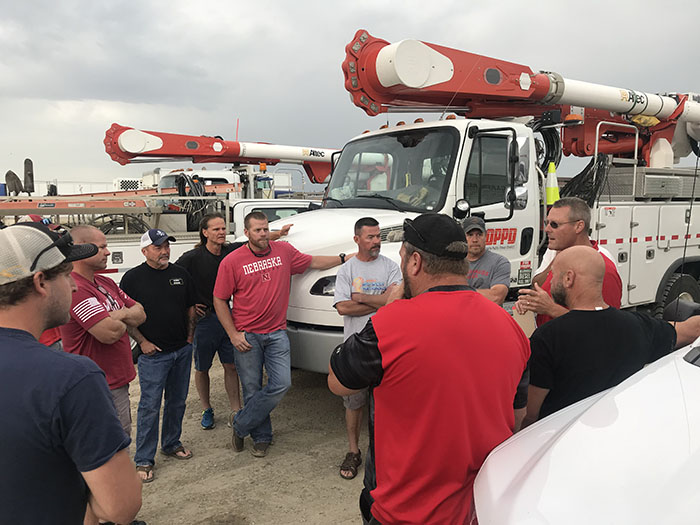 As Hurricane Dorian churns up the East Coast, the anticipated damage from the storm has lessened enough that some utilities are coming home. Wednesday morning, APPA released OPPD crews from mutual aid duty in Florida, after the storm continues to cause little damage to the state’s electric infrastructure. Utilities in the Carolinas have indicated they have the resources they need and are prepared for the coming storm.

OPPD crews will assess the weather and traveling conditions before heading back home.

OPPD crews arrived in Orlando today as Hurricane Dorian approached mainland. The hurricane has been downgraded to a Category 4, but is still considered very dangerous. Millions of people are evacuating ahead of Dorian’s approach.

The Orlando Utilities Commission released OPPD crews, but they will remain in the area until Tuesday morning when they will reassess the need. At this time, OPPD has received no other requests for assistance from utilities in the affected area.

OPPD’s crews are experienced in natural disaster recovery. OPPD belongs to a public power mutual aid network that helps other utilities with restoration after natural disasters.

OPPD crews will be staging south of Atlanta tonight and then monitoring Hurricane Dorian’s path tomorrow as it makes landfall. The hurricane was upgraded to a Category 5, the highest possible categorization for a hurricane. Sustained winds of 185 mph were reported Sunday, tying it with several other hurricanes for the second-highest reported winds ever.

OPPD crews left for Florida from three of the utility’s service centers this morning. It will take several days to drive to their destination. A total of 15 employees are part of mutual aid for utilities that anticipate an impact from Hurricane Dorian.

Forecasters now have the storm making landfall in South Carolina, but Florida remains well within the cone of the hurricane. Dorian reached category 4 strength Friday night with winds up to 145 mph. Local officials warned that the path could still change and that citizens should remain ready to evacuate.

The following pictures show the crews meeting in Nebraska City before heading south. Stay tuned to The Wire for updates as the OPPD crews reach their destination.

OPPD is sending three crews to Orlando, Fla., to help with restoration efforts there in anticipation of Hurricane Dorian. Forecasters expect the hurricane to make landfall early next week.

A total of 15 OPPD employees – 12 line technicians, two mechanics and one field supervisor – will set out in the early morning on Aug. 31 for Florida. Forecasters expect Dorian to be an “extremely dangerous” hurricane, according to the National Hurricane Center.

Florida’s governor urged citizens to have at least a week’s worth of food and be prepared to lose power and cellphone coverage for several days.

OPPD crews were busy Friday afternoon making sure all preventative maintenance is up-to-date on the trucks they will take before making the long trip. Line crews were checking their equipment to make sure everything was in good working order and ready for the nature of the restoration work.

OPPD President and CEO Tim Burke said the decision to send crews to Florida was the right thing to do.

“While it is never an easy decision to send our crews across the country into situations like this, it’s important that our fellow citizens know we are going to be there for them in their time of need,” Burke said. “Looking out for one another is at the heart of public power’s mission and its something we here at OPPD believe very strongly in.”

Burke said the crews will not be going directly to Florida, but will be staging in a neighboring state. They will be ready to mobilize and begin working as soon as it is safe for crews to do so.

Burke said OPPD has benefited from mutual aid efforts, most recently on June 16, 2017, when tornadoes knocked out power to 76,500 customers at the peak of the storm.

The effort, which involved representatives from OPPD, looks at a variety of themes and areas related to the state’s economy, population and government.