Engineer’s love of electricity was late-coming 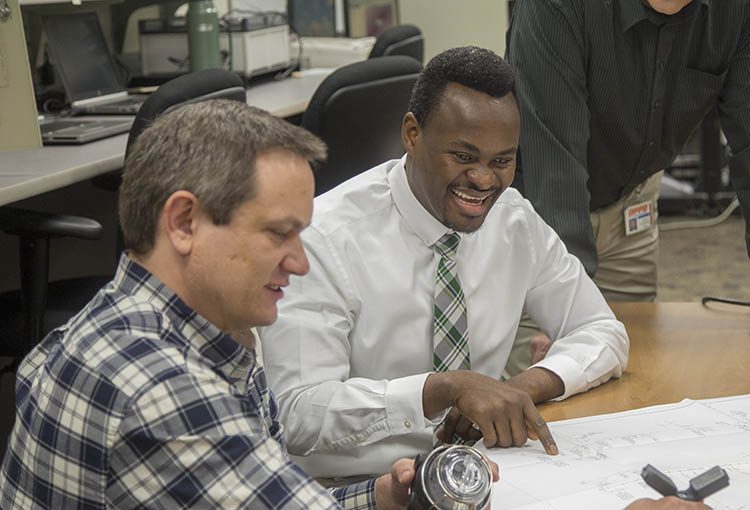 Videgla Sekpe’s early interactions with electricity were anything but positive. He was nearly electrocuted as a young boy.

Sekpe was only 6 or 7, fresh out of the shower at his home in Togo. Dripping wet, he reached for the lamp switch when he felt what he described as “a mighty handshake that wouldn’t let him go.” His mother ran in and pulled him away, saving him.

While rubbing the scar on his right index finger, he acknowledges how fortunate he is to be recounting the story. Lucky the current didn’t pass through his heart.

And yet, Sekpe ended up working with electricity for a living. In May he was honored as the Nebraska Society of Professional Engineers Eastern Chapter’s Young Engineer of the Year for 2016.

Sekpe’s honor was based on a number of criteria, including engineering achievements, educational, civic and humanitarian activities and professional society activities, among others. Upon hearing he’d won, Sekpe said he felt a mix of emotions.

“I was very honored that I was chosen out of all the people who could have won,” he said. “I was happy that at least someone realized I’m making a good contribution to the profession. But also I was humbled. I know of many engineers who work tirelessly behind the scenes without being in the spotlight simply because of their dedication. I’d like to dedicate this award to other OPPD engineers as an encouragement to keep at it.”

finding a career he loves

At first, he wanted to be an architect. The field combined his early interests in art and math. He’d see bridges and tall buildings and ask himself, how did someone design it?

But after working for OPPD, he found he loved working with electricity, hard to believe given his childhood experience. For him and electricity, it’s been a love/hate relationship, he said. Over the last few years though, it’s been mostly love.

Among Sekpe’s accomplishments at OPPD in his current role as a Transmission & Distribution project manager are working to implement smart grid technology as well as managing a number of substations and large-scale distribution projects. He holds a bachelor’s degree in construction engineering and a master’s in construction, both from the University of Nebraska Omaha. He is also a licensed professional engineer and holds a project management professional certification.

Sekpe is active in the engineering community, having been a founding member of OPPD’s Society of Engineers in 2010 and helping start the group’s Engineer of the Year award. He’s also active in Toastmasters and helps lead a young adult prayer group at his church. All this on top of being father to 1-year-old twin boys, David and Wesley.

“One of the most important things I’ve discovered about the profession of engineering is the challenge to pursue the backward step towards knowing who is important in my decision making and what I want to accomplish by the end of the day,” he said. “This has helped me put family and the welfare of my fellow co-workers first while working on worthwhile and challenging projects at OPPD.”