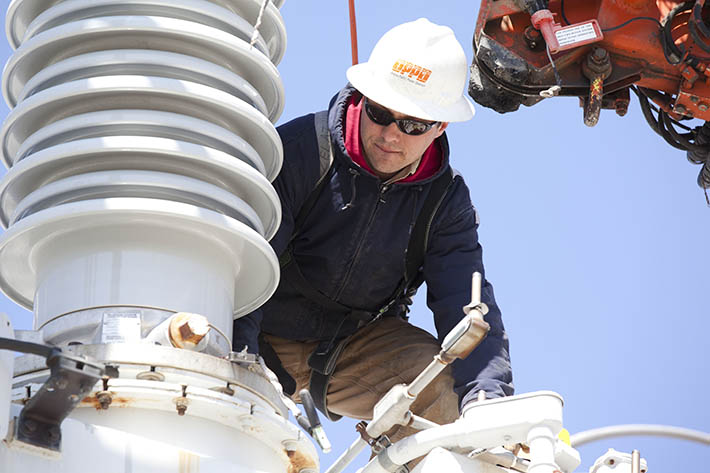 OPPD has powered the communities it serves through wars, floods and pandemics. The utility has seen the Omaha area grow and thrive for more than seven decades. And on Dec. 2, OPPD celebrates the 75th anniversary of its creation.

The utility is honoring its past and celebrating the men and women who helped make OPPD what it is today. At the same time, OPPD is looking to the future, integrating new technologies and exploring new generation resources while remaining committed to a mix that preserves the delivery of affordable, reliable electricity.

In the late 1800s, several electric companies formed to provide electricity to the citizens of Nebraska. Rapidly changing conditions and obsolete equipment forced many of those out of business. By 1900 only a few had survived.

Such holding companies owned utility properties and controlled the policies but did not actually operate the utilities. American Power & Light Company, in turn, was largely owned by Electric Bond & Share, another holding company incorporated in Maine.

During this time the state’s irrigation needs were not being met, and by 1935, only 7% of Nebraska farms had electric service. Half of those were receiving electricity over lines the farmers themselves had constructed.

These and other concerns prompted the Nebraska Legislature to pass the “Enabling Act” in 1933. The law permitted the formation of separate or combined public power districts and irrigation districts as state political subdivisions.

Shortly after that act was passed, the Federal Reconstruction Finance Corporation was created to supply credit to public and private organizations that were developing projects that would pay for themselves. In Nebraska, the promise of financing enabled the completions of three dam projects constructed primarily to provide irrigation.

To increase their economic feasibility, the dams were also used to generate electricity for sale, though at the time there were no customers to buy that power because of the monopoly of the private holding companies.

U.S. Sen. George Norris of Nebraska and others worked to launch a four-year study examining the electric utility industry. In 1935, Congress enacted the Public Utility Holding Company Act (PUHCA) to eliminate the abuses of electric holding companies. The Act forced the dissolution of private multi-state utility empires along with designating the Securities & Exchange Commission (SEC) to enforce provisions of the law.

However AP&L and the Nebraska Power Company decided to fight the SEC’s order to dissolve and several lawsuits were filed on both sides. A group of Omaha citizens worked to resolve the conflict and retain all employees and honor all union contracts.

During the 1945 Legislative session, senators passed a bill authorizing the creation of the Omaha Public Power District and on Dec. 2, 1946, OPPD, a political subdivision of the state of Nebraska, purchased the properties of the Omaha Electric Committee Inc. for $43.7 million.

OPPD’s service territory expanded in 1965 with the merger of the Eastern Nebraska Public Power District.

A small gristmill in Ashland, Nebraska, produced the first electricity in OPPD’s service territory in 1873.

The first generation for OPPD was electricity produced at Jones Street Station (still a peaking plant today) and at the South Omaha Steam & Electric plant at 27th and P streets.

As demand for electricity grew, OPPD equipped the Jones Street plant with a 44,000-kilowatt generator in 1951. Three years later, North Omaha Station began operating with one coal-fired unit. That plant would grow to five units over the years and still produces electricity today; it was the longtime workhouse of OPPD’s generating fleet.

OPPD’s other major baseload generating stations were built in the following decades. Fort Calhoun Nuclear Station (FCS) came online in 1973 and Nebraska City Station in 1979. Those plants helped OPPD fuel the growth of the Omaha metro and surrounding areas.

OPPD has seen its role shifting over the years. While delivering affordable and reliable energy has always been at the utility’s core, how it does so continues to evolve.

In 2016, FCS ceased operations because of financial concerns and economies of scale at the nation’s smallest nuclear plant; it is now going through decommissioning.

OPPD is adding up to 600 megawatts of utility-scale solar generation with backup power to come from natural gas as part of its Power with Purpose project. The utility has also committed to a goal of net zero carbon production by 2050 with its Pathways to Decarbonization project.

Longtime employees say they are confident the utility’s future is bright.

“We have people doing amazing work. OPPD’s future is so bright,” Johansen, who started her career at FCS, said. “I have had the fortunate opportunity to work in Human Capital for the last nine years of my career.

“We hire very bright, intelligent people at OPPD, and I have had the pleasure to support so many of them. This company can accomplish anything it sets its mind to.”

Challenges like the 1997 ice storm, the 2011 and 2019 floods, and this year’s July windstorm have tested the utility. But the men and women of OPPD have always risen to the challenge. For the past two years, employees powered our customers’ lives through the Covid 19 pandemic, a time during which reliable electricity has never been more important.

Rod Rogers, lead analyst for Corporate Security, said the combination of people, company values and benefits sets OPPD apart. He is confident in OPPD’s next 75 years.

“I see a company that will continue to follow its North Star,” he said. “Improving technology and processes to provide clean, safe and reliable energy to everyone within our service territory. And treating people with respect inside and outside of the company.”