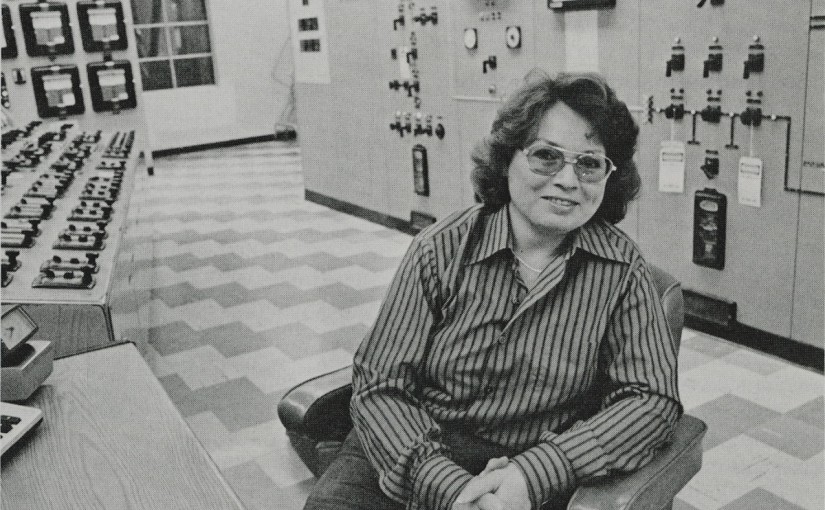 Betty Queen didn’t set out to be a trailblazer for women in the workplace, but during her nearly 20-year career at OPPD, a trailblazer is exactly what she was.

In 1984, Queen became the first woman in Omaha to earn her 1st grade stationary engineer license, the highest grade achievable.

Also known as unit operators, the 1st grade stationary engineer works in the control room and ensures the power station is operating properly, overseeing the boiler, turbine-generator and other equipment and directing those working on that equipment outside the control room.

There were other firsts for Queen at OPPD.

She’s also believed to be the city’s first 2nd grade stationary engineer. And for a while, she was the only female coal-fired plant unit operator in the country.

At the time, Queen was largely unaware of her accomplishments. Things like that didn’t get much notice, she said. Not that she would have dwelled too much on them. She was just trying to help pay the bills and set a good example for her daughters.

“I did think ‘good for women. I broke a barrier for someone,’” she said from her home in the Ozarks region of Missouri. “If we had internet communities then like there are now, it probably would have been different. But there was no community like that at the time.”

For Queen, the most important thing was that she needed work and OPPD presented a good opportunity. She had always been a hard worker, developing a solid work ethic early in life helping out on the family farm near Farwell, Neb.

She married right out of high school and worked various jobs – information operator at AT&T, manager for two different auto dealers – in between stretches of being a stay-at-home mom. Queen’s father is the one who suggested she go to night school to get her 3rd grade stationary engineering license, the first of three such licenses she would earn.

In 1979, a counselor at an employment office suggested she apply at OPPD, which was looking to hire more women at the time. The counselor said Queen would probably be the first woman hired for certain positions inside the plant. Having passed the class for her 3rd grade stationary license, she was hired after three hard and lengthy interviews.

After being hired, she had to wait a month before starting so a women’s shower could be installed at the North Omaha Station (NOS) locker room.

The first years had difficult moments. Queen felt the need to prove herself and would not be deterred.

“My incentives were one, I needed money; two, I can do this; and three, I have three daughters and I want to make sure the doors were never closed in their faces,” she said. “I wasn’t a big women’s libber, but it was a job I wanted to do and I was going to stick with it.”

Queen said there were some rough times early on with some who didn’t want a woman doing “their” work. But she stood strong and wouldn’t be driven out.

She remembered there was a coal spill during one of her first weeks at OPPD. Her supervisor told her join the other employees and “get your gloves,” so she started scooping.

She worked her way up and, after five years, she got her 1st grade engineer license, eventually becoming unit operator at NOS. She said if given the chance, she’d do it all over again.

Retirement has been busy for Queen. She and her husband have 30 acres on which they built an energy-efficient home – designed by Queen herself.

In 1999, she started taking herbal medicine classes and now grows her own healing herbs. She has presented programs at the local home and garden show as well as the Ozark Herbal Friends Club. She is also secretary and one of the founders of the local chapter of the Missouri Native Plant Society.

“I absolutely enjoyed being a unit operator, and I enjoyed bringing those nine-story machines online,” she said. “When we had the 50th anniversary for the plant, a steamfitter came up to me and said he appreciated the way I brought the boiler up to pressure to test the safeties. He said it just went right up, and it blew just like it should. I thought that was pretty good.”

The percentage of women working in plant jobs typically held by men has increased over the past 20 to 30 years.

By choosing to work in a male dominated field, Queen was definitely a trailblazer for women.

“There are a lot of things the present generation takes for granted and there is a reason for that,” Queen said. “One woman has to open the door before other women can come through.”