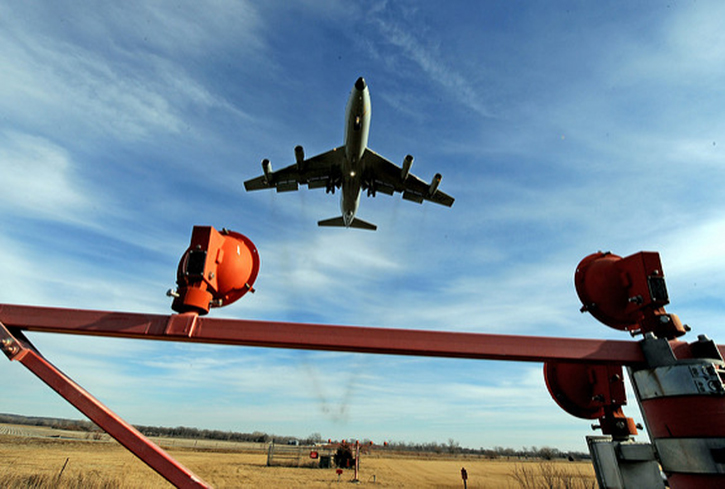 OPPD had its own beginnings near the end of World War I, around the same time Offutt saw its first aerial units take to the skies. For much of the century since, the two institutions have enjoyed a strong, storied relationship.

Offutt’s role as an essential defense installation means keeping reliable power flowing to the base, and its nearly 9,000 personnel, is at the very core of that relationship.

OPPD account executive Steve Sauer has worked with the Air Combat Command’s 55th Wing for 10 years. During that time, he’s fostered working relationships with a series of 55th Wing Civil Engineering Squadron leaders, as well as some of the installation’s most noteworthy tenant units, including the 557th Weather Wing (the Air Force’s primary weather agency) and USSTRATCOM (America’s strategic deterrence and response organization).

“They trust us,” said Sauer, speaking about the district’s role in delivering power to the base, and often going beyond the meter to advise on topics such as energy efficiency. “It’s an excellent relationship. They’re definitely one of our most unique customers.”

That relationship has evolved over the years. It has included the construction and retirement of multiple substations fully and partially dedicated to powering the base.

Offutt used to be a wholesale electricity customer. They’ve recently moved to a hybrid energy customer and customer delivery model. In the mid-2000s, the Department of Defense sold the majority of Offutt’s electrical distribution systems to OPPD and entered into a 50-year custom contract with the utility.

The new USSTRATCOM headquarters has driven part of the base’s demand for dedicated power. However, the base’s overall energy demand has actually seen a decrease. And that’s a success story of its own.

Sauer said Offutt has been systematically investing in upgrades to its heating and cooling systems. This allows them to both sustain reliability and increase energy efficiency. OPPD experts played a big part in that process, consulting on multiple construction and renovation projects.

“We’ve seen their demand actually drop by three to four megawatts, mainly because of efficiency efforts and the OPPD energy partnership,” he noted.

The June 2017 storm that struck Bellevue affected large portions of the base’s energy infrastructure. OPPD was quick to respond and help restore service.

Recognizing Offutt’s importance to the region is one reason OPPD backs the Greater Omaha Chamber of Commerce’s efforts to support the broader military community.

The people of Offutt Air Force Base, including service members, the civilians that work alongside them and the families that support them, are woven directly into this region’s fabric. OPPD proudly empowers them all.

View all posts by admin >
< Previous Article Next Article >

Geothermal heating and cooling is ideal for commercial customers – particularly schools – who maintain buildings for decades.

Outages occur for a number of reasons, including when furry friends interfere with equipment.