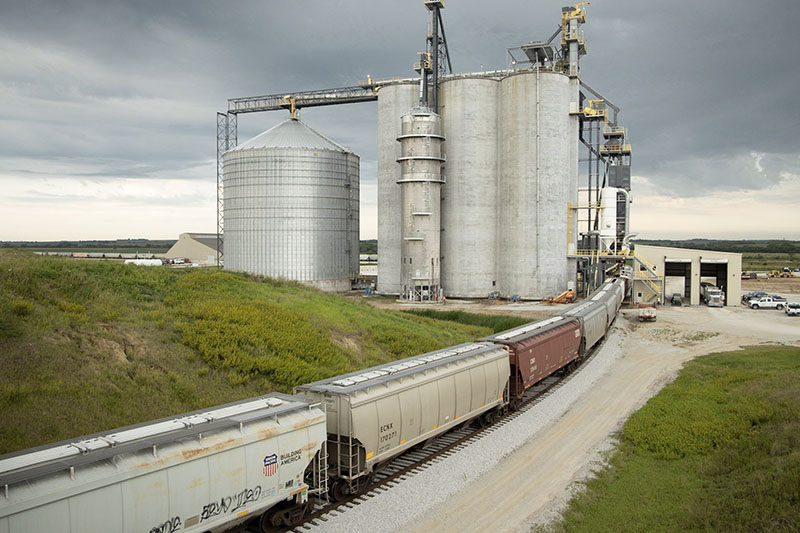 A partnership with the business, Union Pacific and OPPD made the milestone possible.

The Arbor Line is a 54.6-mile line that runs between Lincoln and Nebraska City. OPPD opened it up and helped construct connection to Frontier to better serve the community.

The 100th train consisted of 105 cars, each holding about 4,000 bushels of corn. Corn from the facility has gone out across the country. The historic train’s destination was an ethanol plant in Kansas. A majority of the grain that leaves the Syracuse facility goes to California and Mexico.

Frontier Cooperative CEO Jeremy Wilhelm said it was great to see something go from concept to implementation that has had such a positive impact on the local community.

“This impact will be here for 40 to 50 years down the road for the next generations to enjoy, said Wilhelm. “Not only has this facility provided good jobs for the community of Syracuse, it has opened up access to markets that the surrounding areas did not have before, which also means a more competitive basis for our farmers to enjoy for many years to come.”

Brook Aken, manager of economic development OPPD, said it has been exciting to see how the line has spurred growth and development for communities OPPD serves. She said the utility also plans on using that rail access for a nearby site.

“It’s been a great partnership, and we’re hoping to gain other partners with future economic development,” Aken said.

Prior to the rail shuttle facility’s construction, the bushels were trucked to other locations such as ethanol or processing plants. The Syracuse facility created more options and opened new markets.

Changes from COVID have led the OPPD team to explore new ways to promote the area and help customers find resources.