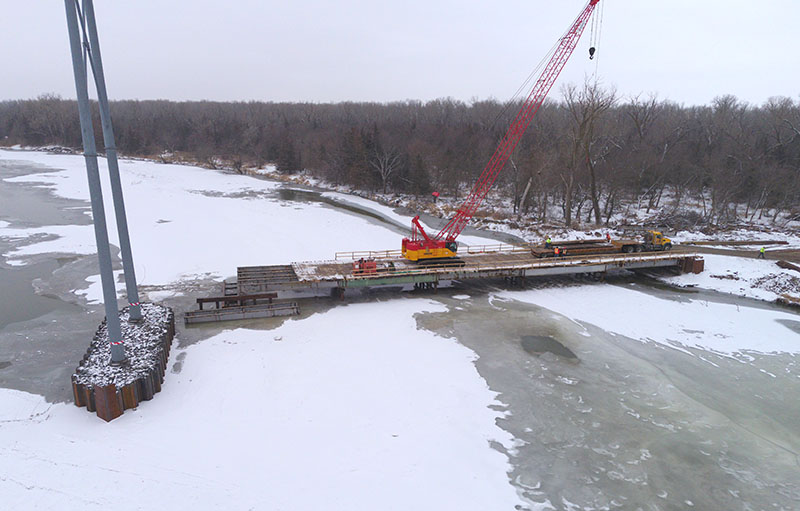 Nearly one year after historic flooding along the Platte River, OPPD has completed a project to reinforce three transmission structures that cross the river. The 2019 flooding widened and shifted the river’s channel.

Hawkins Construction performed the work with engineering done by Olsson.

Hawkins had to first rebuild the U.S. Highway 281 bridge over the Niobrara River before they could begin the OPPD project, said Shane Hanson, manager of Transmission Engineering at OPPD.

The flood put a transmission structure that was 300 feet from the river right in the middle of the Platte. Swift-moving floodwaters scoured away the river banks and shifted the river’s course. Structures like these aren’t designed to be in the middle of a river so OPPD had to restore the foundations, Hanson said.

Two other structures between the Platte and Elkhorn rivers were facing impacts due to soil erosion between those rivers, Hanson said.

The reinforced and rebuilt transmission structure bases will be able to withstand the moving water that now surrounds them.

Workers used a temporary bridge structure used on the Niobrara project to complete the work. Hanson said the new structure is similar to a typical bridge crossing on a river, with the foundation protected like it is on the bridge.

OPPD needed to complete the work before ice jams became a problem, Hanson said. Ice jams are now happening, including one in Fremont along the Platte River that has threatened the city with floodwaters.

The structures on the Platte have ice jam protections. They divert ice from the bases and may be tested in the coming weeks as the weather warms, Hanson said.

During construction, crews took alternate measures so work could be done in the cold. Hanson said crews used heated fluids to keep the grout warm that was holding the rip rap together. They also covered it with big industrial blankets to keep in the heat. But the work had to be done before the next round of potential flooding happens.

OPPD is working with FEMA on reimbursement for the project, which cost between $3 and $4 million.