‘So lucky you were there’ 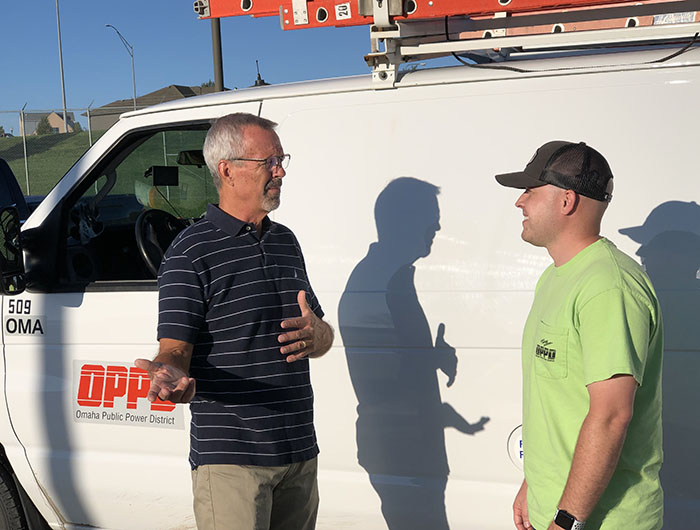 It was a sunny Tuesday morning in late August, wind at his back, and mostly open roads.

Biking enthusiast Pat Hollingsed’s favorite ride is a 32-mile trek spanning four counties that the recent retiree manages to complete three or four times a week. But the ride Aug. 27 was almost his last.

Matt Patrick, an OPPD meter apprentice, had just left Valley and was on his way to another call. He was a following a car on 276th Street, just south of Nebraska Highway 36, in northwest Douglas County. That car pulled into the opposite lane to pass a bicyclist then returned to its lane.

Suddenly, Patrick saw the cyclist – Hollingsed – pull off the paved road and then flip his bike trying to return to the highway. The bike’s front tire got stuck on the rut and he landed directly on his head, skidding across the road.

Patrick pulled over to help Hollingsed, who quickly disengaged from the bike and tried walking. His legs were unsteady. Patrick blocked traffic with his vehicle. Then he led Hollingsed to the van so he could sit.

An ambulance was called and Hollingsed called his wife. Six times. The woman who passed him also stopped to help.

Seeking out his helper

A month later, Hollingsed was at OPPD’s Elkhorn Service Center thanking Patrick. The meeting was Hollingsed’s idea. He wanted to look Patrick in the eye and shake his hand.

Hollingsed sent an email to OPPD customer care representatives hoping to identify his helper and piece together what happened.

“Hopefully you will be able to identify him, and recognize him for his service to me and his embodiment of what must be one of your core values: service to the public,” Hollingsed wrote when trying to locate Patrick. “He represents the greatest traits in humanity and is a striking example of the citizenship OPPD seems to value.”

At the meeting, also attended by Jackie Hollingsed, Pat’s wife, and OPPD employees Cheryl Limbach and Justin Robinson, the two men relayed the events of that morning. Hollingsed never lost consciousness, but the details were a blur. He had a concussion. While he was making sense when he spoke, he couldn’t remember what he’d just said, hence the repeated calls to Jackie.

Hollingsed asked Patrick for details. Patrick described the accident, how the bike flipped and his head was the first thing that struck the road.

“Thank God you were wearing a helmet,” Patrick said. “I think it saved your life.”

“It did, it saved me,” Hollingsed said. “I still have it, I should have brought it. The left side is cracked, the whole thing is ruined.”

“I don’t even remember going off the road, or maybe just vaguely,” Hollingsed said. “Next thing I know, I’m being put into the ambulance. But you and that woman were there to watch over me and make sure nothing happened to me, I remember that.”

Back on the road

His bike, a Cannondale road bike, is fine. He just had to straighten out the handlebars. His shoulder, knee, and hand were badly scraped and bruised. He “left a lot of skin out on the road.”

But he is back riding now. Timidly at first, but he’s got his confidence back now. Jackie has threatened to send him back to work, five months after her husband’s retirement, so she never gets another call like that again.

It was a good meeting, said Limbach, manager of the Elkhorn Transmission & Distribution Center. For both men.

That was a hard thing for Patrick to witness, she said. Patrick’s supervisor, Robinson agreed.

“I took the call from him, he was pretty shook up, very concerned,” Robinson said. “That’s just who he is.”

Hollingsed nodded. “That’s one thing I remember, that look of concern on his face.”

Hollingsed knows how close he was, 27 miles into his ride, to the story having a much different ending. Before parting ways with Patrick, he makes sure the younger man knows to always wear a helmet whenever he goes on a ride, to be safe.

Patrick promises to do so. And with that, the men shake hands and return to their daily lives.