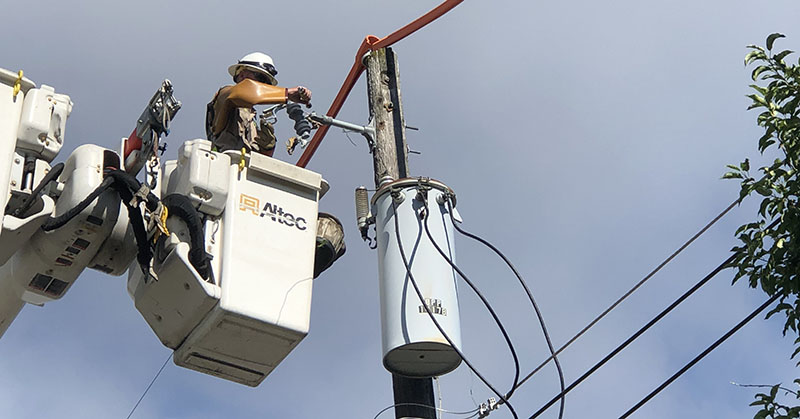 Why does OPPD use them?

Power outages occur for a variety of reasons: weather, vehicle crashes, trees encroaching into lines and animal interference. Squirrels spend time on the lines and power poles, as do birds and occasionally raccoons and possums. They can cause problems when they chew through lines or come into contact with equipment.

For animal safety and power reliability, OPPD’s specifications call for installing animal covers, commonly known as “squirrel guards” on overhead equipment. Installation of the guards in established areas are based on outage numbers.

There are two components to what are referred to as squirrel guards. One component is just what it sounds like, rubber boots or covers that fit over primary bushings, lightning arrestors, wires and other equipment up on the lines near the transformers. Some areas of line that are at odd angles, such as connectors, are covered with special tape to protect against curious animals.

The other component involves installing “cutouts” on the poles. Line technicians install them on small arms near the top of the pole that contain a transformer fuse. These fuses serve as reliability protection for customers and protect primary feed wires. The transformer fuses will fail if an animal still gets through the other protections on the pole or transformer it will cause just that transformer fuse to blow. So instead of multiple transformers out and multiple customers without power, the fuses ensure the outage is isolated to only the customer served at that location.

How common are they?

Squirrel guards are on a majority of OPPD’s overhead equipment, especially in older areas of the service territory. These areas have more trees where animals can hang out. Crews continually add the guards to poles as situations arise.

The biannual effort looks for needed repairs across the OPPD territory and identifies clearance issues on transmission lines.

Infographic: Doing a big job in a small space

Crews can replace power poles in your back yard using a mini digger derrick. Unlike a 24-foot line truck, this compact machinery fits through a 36-inch gate.

When strong storms strike, customers often wonder why OPPD doesn’t bury all its power lines. A team is doing an extensive analysis of the issue.