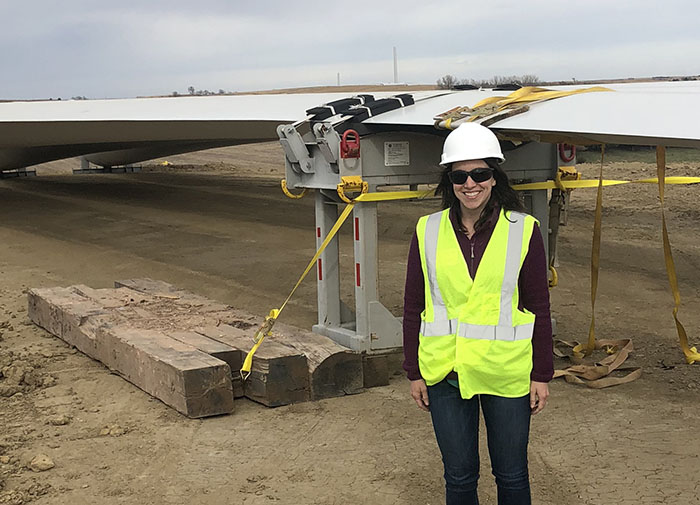 In short, Kennedy and her team are where the utility, and customers, can turn to get answers about renewable energy.

Link to the industry

Electricity has been part of Kennedy’s life since childhood when her parents owned and operated a business that provided services and electrical equipment to utilities and large industry.

“I often joke about how many of our family summer vacation photos also had substations in the background,” she said.

Kennedy studied both mechanical engineering and Spanish at Iowa State University. She initially interned for a large construction company as a commissioning engineer. After she returned from a semester abroad she found an intern position as an operations analyst at OPPD.

After two summers, she was hooked.

“I knew I liked the company and really liked the work I was doing.”

Before she even graduated, Kennedy accepted a full-time position as a corporate performance and process engineer at OPPD.

Kennedy has had the opportunity to do many different things at OPPD, including strategic initiatives. She said those experiences challenged her and led to personal as well as professional growth.

One project was defining a strategy for OPPD’s involvement with electric vehicles. Her team analysed the current number of electric vehicles in Nebraska, projected growth and potential it could have on OPPD’s electrical system. The work involved reaching out to a variety of customers to understand their perspective as well as other utilities to see what had worked and what didn’t work.

“Ultimately, we were able to recommend a strategy that make sense for OPPD’s customers,” Kennedy said. The strategy utilized local and national partnerships to connect customers to resources so they could switch to electric vehicles. That strategy is now being implemented at OPPD and involves rebates for EV owners.

A second project involved work outside of the office as co-chair of the OPPD Society of Engineers (OSE) board. Both Kennedy and her colleague had a passion for STEM education and saw a need in the community.

“We created Electricity 101,” she said, “a hands-on curriculum designed for engineers to teach students about how electricity is generated and delivered to customers.”

The co-chairs secured funding for outreach kits. Students could then build their own circuits and get hands-on education about electricity.

“Several years later, I am so proud to see OSE continue to reach out to our community and bring hands-on learning to classrooms.”

Kennedy’s job brings variety every day. From signing her name on a wind turbine blade to research and collaboration, she and her team cover a variety of duties related to alternative energy sources.

Energy technology is rapidly changing. Kennedy’s team gets to research and work with a variety of industry peers to bring about opportunities that will ultimately bring reliable, renewable energy to OPPD customers.

“I love the balance of technical, strategy and collaborating with people both internally and externally,” she said. She now helps OPPD meet its environmental goals in a way that balances with the utility’s other strategic directives.

Kennedy wants customers to know that the public power model allows OPPD to really do what’s best for the local community.

“It took me several years to understand the value of public power, but it finally clicked.”

The public power model allows OPPD, to move quickly on strategies and initiatives that make sense for customers, she said.

Kennedy enjoys taking time to enjoy the world around her.

When she’s not working, you may find her outside enjoying nature with her golden retriever, Ruby. She also enjoys mentors and tutors in STEM subjects, salsa dances and travels with her husband, Colton.

“I love exploring new places whether by foot, bicycle, car or airplane,” she said. “Traveling for me is not so much about the vacation. It offers an opportunity to see and learn new customs and cultures, and ultimately understand more about the people and places of the world.”