OPPD board votes to cease operations at nuclear plant 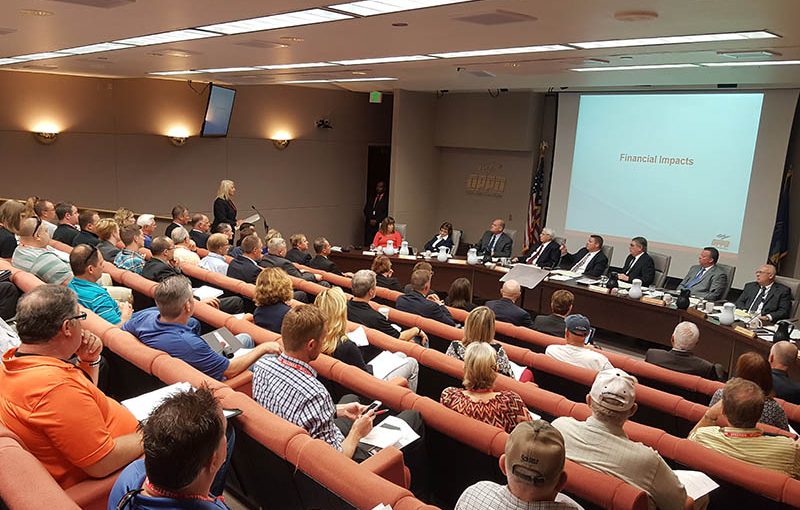 The OPPD Board of Directors voted today to cease operations at Fort Calhoun Station (FCS) by the end of 2016.

Their decision means OPPD customers will see no general rate increase for the next five years, through 2021. OPPD’s target, set by the board, is to achieve rates that are 20 percent below the regional average by 2020.

Senior managers made their FCS recommendation last month, after a thorough review of various future resource portfolio scenarios. A third party, Pace Global, reported that ceasing operations at FCS and rebalancing the generation portfolio will save the district between $735 million and $994 million over the next 20 years.

Board Chair Mick Mines said, “This was a difficult vote and one we did not take lightly. The industry is changing and it is imperative that we make strategic decisions to better position the district in the future.”

The board considered market conditions, as consumers are using less energy and natural gas prices are at an historic low and expected to remain low. They also looked at the potential impact of the Clean Power Plan, which does not give credit for existing nuclear power plants.

And they took into account economies of scale. FCS is the smallest rated commercial nuclear unit in North America, based on accredited capability. It cannot spread costs across high production levels, like larger, multi-unit plants.

“As tough as this decision is, we cannot afford to ignore the changes happening around us,” said OPPD President and CEO Tim Burke. “We must look to the future.”

The Nuclear Regulatory Commission will continue to regulate FCS during the decommissioning process. OPPD has opted to go with the SAFSTOR method of decommissioning, as it provides the greatest flexibility and value.

It will cost an estimated $1.2 billion to decommission FCS. As of the end of May 2016, OPPD has approximately $388 million in total available decommissioning funds. The district expects to be able to cover the remaining costs without raising the existing rates.

Burke emphasized that ending operations at FCS is not a reflection of employee performance. “They have done all that we’ve asked, and they’ve done a tremendous job. Unfortunately, in today’s market, it’s just too costly to run the plant long-term.”

The district is currently examining the staffing requirements needed as it moves through the decommissioning process. There will be no immediate job losses for OPPD employees.

Senior leaders have pledged to work with FCS employees during the job transition process. “We will make every effort to absorb as many employees as possible into other areas of OPPD, based on qualifications and open positions,” Burke said.

The district has also enlisted the Nebraska Department of Labor, the Greater Omaha Chamber of Commerce, and other agencies in the re-employment process.

The FCS decision is part of OPPD’s larger resource planning process, which builds upon the 2014 resource generation plan. The plan reformed the district’s energy portfolio with input from its customers and community leaders.

The district will continue to look at resource options – including the possibility of constructing or purchasing additional generation of many types (natural gas, wind, solar) and increasing demand side options as necessary – as it develops its long-term integrated resource planning portfolio.