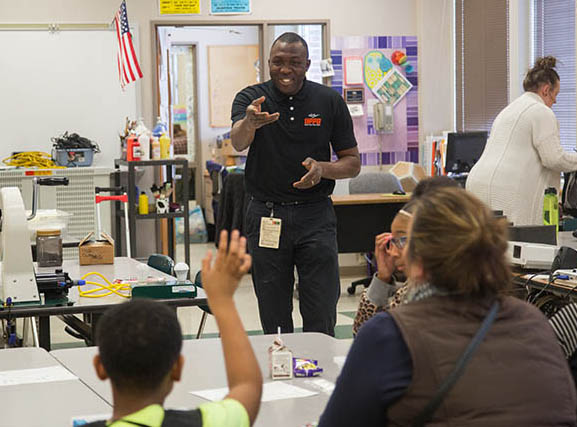 OPPD engineer Tevi Lawson dreamed of building skyscrapers and bridges. Like the ones he saw decorating the Chicago skyline when he first arrived in the country from his former home in Togo, Africa.

So how’d he end up making electricity?

Lawson was studying construction engineering at the University of Nebraska at Omaha and became a co-op in distribution engineering. When a job opened up in the department after graduation, Lawson joined OPPD.

“There is nothing more rewarding than driving around town and showing the lines I have designed to my family.”

looking out for customers

Lawson said the bottom line is, he provides customer service. He makes sure people have reliable power. He is on OPPD’s Damage Assessment team and patrols the lines when there are outages.

A recent day saw Lawson working with a customer who was changing business locations. But there was a problem with the location of a power pole. It would limit the flow of traffic in the parking lot and potentially be a burden for customers. Lawson was working on drawings to alleviate the problem for the business owner.

“Everything looks good on paper, but we have to work to make sure our customers are happy,” he said. “Our goal isn’t just the delivery of power. We need to develop good relationships with our customers.”

He also works on system improvement projects. Lawson said people would be surprised by the different types of engineers that work at OPPD. He certainly was.

pride in his work

Lawson said he enjoys driving his 12-year-old daughter, Janaizsa, around to show her the projects he’s been involved in.

“I love that I can take my daughter out and say ‘I helped build this, this is what I do for a living,’” he said. “It is very nurturing and humbling to know that I partook in the construction of this country, helped build America.” 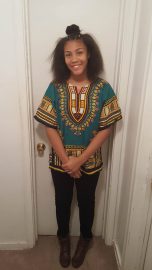 Outside of work, Lawson likes spending time with his wife and daughter. He said he has heard a lot of older folks say they wished they’d spent more time with their family. He said he’s made sure that’s a regret he’ll never have.

He’s also active in the community and is the co-chair of OPPD’s Society of Engineers. He helps present Electricity 101 at local schools and mentors three high school students through his volunteer work with Partnership 4 Kids.

In 2012, Lawson was awarded OPPD’s President’s Award, given to an employee for “extraordinary accomplishments.” In July of that year, Lawson alerted a family of four that the rear-deck of their home was engulfed in flames. The family was in the basement unaware. Lawson ran to the house and beat on their front door, yelling “Get out! Get out!”

The midtown Omaha home was destroyed, but the family and their pets made it out. For Lawson, it was just another instance where he did his part to help others.