Careers in trades: Stable, lucrative and in high demand 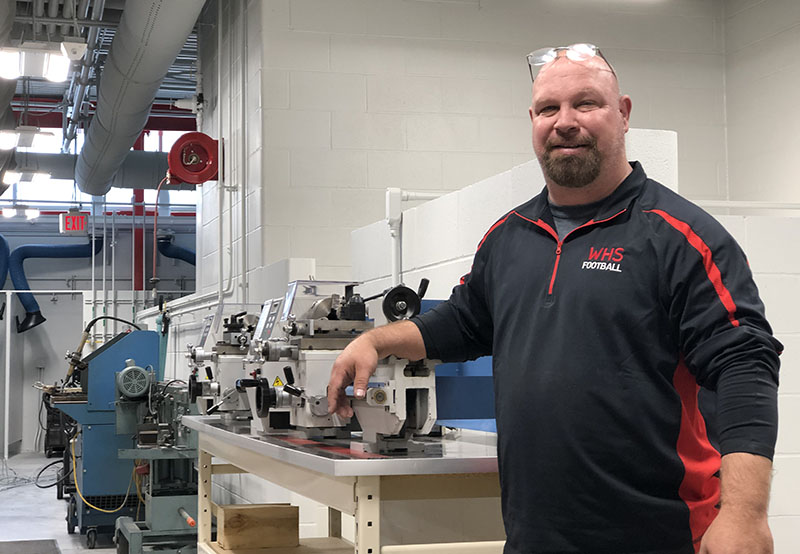 It’s no secret to those already working in the trades that they are great careers. OPPD’s Doug Madison, Substation switching crew leader, knows this firsthand.

Madison, with OPPD for 28 years, started as a helper in the line department. He’s also president of the International Brotherhood of Electrical Workers (IBEW) Local 763. Madison said his area has brought in good candidates to fill open positions. But he knows that isn’t the case everywhere.

He said discussions in their international union meetings have included how to get people into those jobs. Madison said the union is using posts on social media and creating their own job fairs to attract talent.

OPPD is one of the region’s largest employers of people working in the trades. Electricians, welders, line technicians, mechanics and others all work to keep the power flowing and the lights on. A stable work week, vacation time and good benefits all work to OPPD’s favor to attract and keep talented trades workers, Madison said.

But, as more workers reach retirement age, there is a real need to get young people involved in those fields. Locally, schools are bolstering their classroom offerings to help meet the growing need within the state’s workforce.

High school educators are among the first to help a teenager decide what career they will choose after graduation. It’s an important decision that could affect the rest of their life. For generations, schools urged students to attend a four-year college  despite rising college costs.

Madison talks to many young people about considering a trade after high school. His nephew is one of them. He is taking welding classes at Omaha Westside.

Westside’s program is booming, thanks in part to their brand-new Welding, Fabrication & Manufacturing Lab. The 2,500-square-foot lab, which opened this month, was made possible thanks to more than $1 million in donations from 40 donors.

Westside instructor Tyler Foster said the investment in the new lab shows students how serious area employers are about filling those roles with future talent.

“These businesses value the future of these students and their edification,” Foster said. “It shows the students there are people who believe in you and are putting their money where their mouth is.”

At Westside, more students are interested in welding and construction careers as opposed to engineering classes, Foster said. That never used to be the case.

John Bombac, another instructor at Westside, said an entire generation of trade workers was lost due to the intense focus on four-year degrees and the costs associated with maintaining a good trades program in schools. Now, students see the allure of landing a good-paying job without being saddled with overwhelming debt from student loans.

Nebraska’s business leaders cite a shortage of workers as the state’s largest problem, according to information from the Aksarben Foundation. Nebraska’s workforce is aging, and the state will need to fill those jobs to keep the economy strong. Aksarben estimates the state’s annual demand for new workers is 45,000.

OPPD is helping fill the gap. Programs like educator internships with the Greater Omaha Chamber of Commerce, Metropolitan Community College and Iowa Western Community College, allow teachers to learn first-hand about STEM-related careers. Foster participated in that program. He learned about the variety of careers available at OPPD that he could share with his students.

Last month, OPPD again hosted the Careers in Energy program in partnership with the Nebraska Energy Workforce Consortium and other local utilities. The event drew local middle school and high school students to OPPD’s Elkhorn Service Center where they spent the day learning about the energy field and its careers while taking part in activities that teach them about substation operations and designing and testing their own water filters.

What OPPD is doing

John Staup, director of Talent Acquisition at OPPD, said the trade labor deficit is coming and OPPD is taking measures to stay ahead of it. Typically, OPPD brought in employees at the entry level. They then followed a career path of helper or laborer to apprentice and then to journeyman.

But recently, the utility has worked to fill some roles with what he called “mid-career employees.” Staup pointed to the recruitment of a class of journeyman-level line technicians. Staup said with recent retirements, OPPD needed workers at those levels to mentor apprentices. The type of work the utility does also called for more experienced workers.

“Thanks to our very competitive wages and benefits and union leadership, these positions are seen as prime opportunities,” Staup said.

There has also been a shift in how OPPD brings in employees.

Staup said it is key to go where those potential employees are “hanging out.” Advertising on Facebook isn’t something OPPD did before, Staup said. And while no job offers are forthcoming yet, OPPD officials have gone into high schools, and in a few cases middle schools, to educate students about the jobs that will be available to them.

“The national recruiting line holds true, in this day of skyrocketing education costs; a trades degree and career are just as competitive as anything you are seeing,” Staup said.

“And that is particularly true at OPPD. These are jobs that will pay a very livable wage starting out, and let people take those next life steps immediately, whether it is buying a house or starting a family. These jobs have never been so lucrative.”