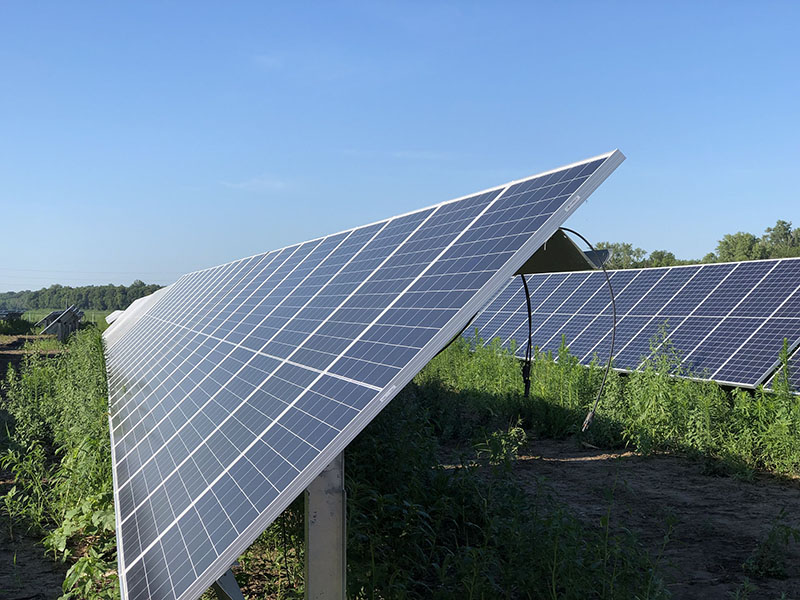 OPPD’s plans to add utility-scale solar, with natural gas backup, to its generation portfolio will move forward after its board of directors voted 7-1 to allow the utility to pursue requests for proposal (RFP) in the project.

“We have done extensive work and due diligence on this issue,” said OPPD CEO and President Tim Burke, highlighting the thousands of hours that went into solving the problem, keeping resiliency, reliability and affordability at the forefront of the project.

In October, OPPD management formally submitted a plan to its publicly elected board of directors to add generation to its fleet. The plan included what would be the largest utility-grade solar presence in the state.

In addition to hundreds of megawatts in utility-scale solar with replacement gas backup, the plans also included refueling some of OPPD’s coal assets with natural gas as the oldest units at North Omaha Station (NOS) retire and OPPD integrates more renewables into the system. Along with these additions, OPPD may also pursue adding grid voltage-support devices as the grid continues to evolve.

A cross-functional team at OPPD initially looked at 70 million scenarios before whittling it down to a workable number and landing on a solution that aligns with the utility’s mission and vision.

Burke said OPPD needs the new generation in light of a changing generation and customer landscape.

“This is part of a journey we’ve been on since 2014, when our board of directors approved the retrofitting of North Omaha Station Units 1, 2, and 3 to run on natural gas rather than coal,” Burke said.

From Oct. 15 through Nov. 8, customers provided feedback on the proposal on oppdlistens.com. During that time, 129 comments were submitted on the website, in addition to social media channels, and phone calls to OPPD’s Customer Care Center.

The journey towards increasing environmentally sensitive generation resulted from OPPD’s stakeholder outreach efforts. Those efforts allowed customers to give feedback on the direction of their public power utility over the years.

OPPD’s path towards renewables has greatly increased in that timeframe. The utility met its original goal for 10% renewables six years early, and, in 2019, sold out its first community solar project. Nebraska may not have the sun intensity of southwestern U.S. states, but there is still plenty of solar power potential, according to the National Renewable Energy Laboratory.

“As we think about all those situations we’re trying to solve for and the rules and regulations we’re required to meet, it’s important for us to think about this next generation of how we’re going to provide service to our customers,” Burke said.

Burke said OPPD’s load continues to grow and the utility must bring on new generation to make up for not just retired coal units at NOS and the decommissioning of FCS, but other generation retirements around the region. Beyond Nebraska, other utilities have retired units as well, such as those at MidAmerican Energy’s George Neal and Walter Scott power plants in Iowa.

Such retirements present challenges for utilities around the region and nation.

OPPD has a legal obligation to serve all customers in its territory. It must maintain reliability standards set by regulators such as the Federal Energy Regulatory Commission, the North American Electric Reliability Corporation, the Southwest Power Pool and the State of Nebraska.

Regulations call for OPPD to guarantee a supply of power over 12% of the utility’s highest level of peak demand. Such regulations ensure the North American transmission grid remains reliable for customers, in simplest terms, keeping the lights on for everyone.

Beyond requirements for reliability, Burke said it is also important for OPPD to emphasis resiliency.

Mary Fisher, vice president of Energy Production & Nuclear Decommissioning, said OPPD’s electrical system has been tested like it has not been in years. These proposals would go a long way to help ensure OPPD maintains its high levels of resiliency and reliability.

Fisher used the past two years as examples: “We have seen multiple storms, flooding and two tornadoes that took out six transmission lines in one fell swoop. During the flooding we had to run peaking units for a nearly a week straight because Nebraska City Station Unit 1 was in a planned maintenance outage and we had to shut down Unit 2 for the safety of our workers and contractors. The peaking units kept the power on for our customers. We are planning differently and need sufficient resiliency on our system to cover these multi-day outage situations.”

Fisher said OPPD’s system resiliency allowed the utility to remain reliable for customers during those situations, but region-wide generation retirements are testing resiliency for the entire region.

Due to resiliency and reliability needs, OPPD asked the board to approve procuring natural gas peaking generation assets along with solar. These additions provide support as NOS transitions from coal to natural gas, and for the solar facility when needed. This would help power the service territory when renewables are not available.

Voltage-control measures are needed to maintain a consistent quality of electricity for OPPD’s customers. These devices work much like water pressure in pipes, providing consistency of water pressure when the faucet is turned on.