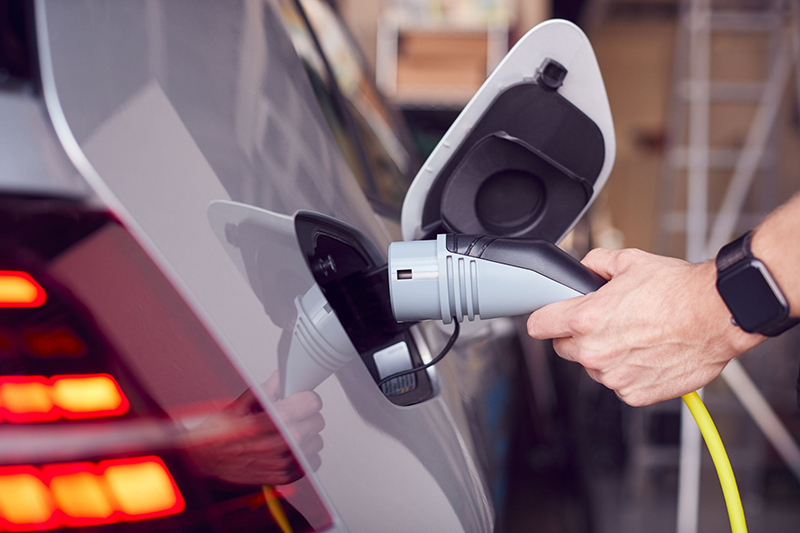 Data shows there are about 2,000 electric vehicles (EV) in the OPPD service territory. That’s not an eye-popping number, but it is one that figures to continue growing as the vehicles become more affordable and better performing and as more options hit the market.

As that number increases, OPPD’s eye has been on what the growing number of EVs means to the utility’s load, especially during peak load times, like the hottest days of summer.

That’s because for many EV drivers, when they charge their vehicles is usually an afterthought.

“People have range anxiety,” said Bridgett Petzoldt, an OPPD project manager in the Alternative Energy Solutions department. “For many people, charging their EV right when they get home is one of the first things they do. We are planting that seed that it’s OK to program your EV to charge later.”

In fact, it’s more than OK. It’s actually better to set your car to charge later. Why is the timing of charging EVs important? Because charging a vehicle takes a lot of energy.

“They use more load than two central air conditioners,” said Greg Garst, an engineer in OPPD’s Transmission & Distribution Planning department. “The later owners can put off that charging time, the better.”

In the energy industry, peak load is a big deal. It is the highest amount of energy used by customers during a set period. Typically, that is the end of the day on the hottest days of summer. Everyone has their air conditioners running, along with their lights, televisions, appliances and all kinds of other equipment.

Now add in businesses and stores and restaurants, all using the same items that draw power from the electric grid – air conditioners, lights and so on.

Regulations stipulate that OPPD and every other energy provider must be able to have enough power to always serve their customers’ peak demand. And they must also have a certain amount of energy in reserve capacity above that peak load demand that can be called upon if needed. Currently that is 12%, but that increases next year to 15%.

“We want customers to get in the habit of charging EVs at night, after peak load demand times are over,” Garst said.

Many vehicles have programs that allow the owner to schedule their EV charging, so it can charge using off-peak power, for example, after 9 p.m. The average customer’s driving habits and distance allow for a complete recharge in just a few hours, so you can set your car to charge later and it will still be ready to go first thing in the morning, Petzoldt said.

There continues to be incentive to switch to EVs. This summer, with the passing of the Inflation Reduction Act, the federal tax credit for EV rebates – $7,500 for new vehicles and $4,000 for used vehicles – was extended until 2032.

Garst and Petzoldt recently gave a presentation to members of the Trade Ally program titled “The Future of EVs.” They hope to get everyone from new car buyers to car salesmen to electricians all thinking about how to be responsible owners of an EV.

They said EVs may account for up to 30% of new car sales by 2030. That will be a challenge for the country’s electric grid, which is why utilities like OPPD are looking into solutions for customers to make sure the transition allows for continued energy reliability as well as resiliency.

“There are things people don’t always consider when buying an EV,” Petzoldt said. “They may not know that many will have to make upgrades to their home electric system, and that they will have to install a charger. Or for some homes, that may mean two chargers. That’s why our main priority right now is education.”

And OPPD is using a pilot program called “Choose Green Charging”to study customers’ EV charging habits. Participants program the scheduling feature on their ChargePoint App to start charging EVs at 9 p.m., Monday through Friday, regardless of when they plug in their car.

It’s just one of the ways OPPD is looking to make the EV charging experience beneficial to both the customer and the utility. As OPPD gathers more data, expect to see more innovative solutions and offerings.