The Henry Doorly Zoo and Aquarium’s journey to successful sustainability efforts began with one light bulb.

In December, 2014, the Omaha zoo reached a significant goal – a 10 percent reduction in energy use – an entire year ahead of schedule. In fact, it surpassed that goal. As of May 2015, it had reduced its usage by 11.2 percent, saving more than $200,000 in electricity costs.

The goal was part of a master plan adopted in 2012 that included a holistic approach to sustainability. The zoo partnered with Verdis Group, an Omaha firm that helps organizations integrate sustainability as part of their business strategies. The approach involved changing employee culture along with implementing initiatives. 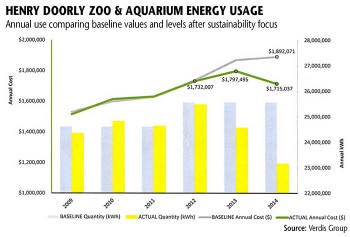 Brian Timm, director of facilities, said a lot of the energy reduction was achieved by retrofitting larger buildings, such as the Lied Jungle, with T8 bulbs in light fixtures, replacing less efficient incandescent bulbs. Now, some of the T8 bulbs are being replaced with LED bulbs for even more cost savings.

Timm said one of the goals not listed in the master plan is to make the zoo incandescent free. As light bulbs burn out, they are replaced with LED bulbs.

Besides upgrading light bulbs, the zoo eliminated or prioritized lighting that wasn’t a necessity, such as overhead lights always on behind buildings. Those that were unnecessary were shut off.

The most visible aspects of the zoo’s master plan are the new and renovated facilities like the recently opened African Grasslands. Energy efficiency is a key component of planning these new facilities. LED bulbs, timers for lighting and the ability to shut off equipment when it’s not in use are at the top of the list.

COO Danny Morris said the African Grasslands is an example of how the zoo looks at different ways to heat its facilities using electricity.

When they add a new building, zoo officials meet with an OPPD account executive to evaluate the current power need, any new demand and whether new equipment needs to be added to meet it.

The first phase of the African Grasslands project includes housing facilities for elephants and hoofstock. Morris said they are supplementing traditional heat sources with electric radiant heat because it allows them increased control.

“Radiant heat is great for the animals,” Morris said. “With electric heat you can ramp things up or down.”

One of the first steps for the sustainability portion of the master plan was to engage employees in efforts such as energy efficiency and recycling by establishing an energy and water management team. The team, consisting of employees, monitors usage and costs on a monthly basis and helps implement strategies that reduce consumption.

Those strategies range from stickers reminding people to shut off light switches, to managing large spaces to ensure they are not overly heated or cooled when unoccupied.

The Omaha zoo’s Green Loan Fund pay for these strategies. A grant initially funded the program, but now it replenishes itself with savings from past projects and OPPD commercial and industrial customer incentives and rebates.

For nearly 19 years, OPPD has helped its customers like the zoo identify and implement energy efficiency projects, said Jim Krist, manager, OPPD Key Account Sales and Services, and the interest in these projects continues to grow.

Krist said that over the past 10 years, customers have reached between 20 to 50 percent whole-building energy savings with a payback range of two to four years.

“Saving energy dollars enables our customers to invest more in their core business needs,” he said.

Small changes at the zoo have mixed with larger projects to reach sustainability goals. One change was a new schedule for cleaning animal holding areas, previously hosed down daily. By dry washing on alternate days, it reduced water usage. However, the health and welfare of the zoo’s animals is always the top concern.

“It’s about finding appropriate solutions for appropriate situations,” said Daniel Lawse of Verdis Group. “All of the zoo employees support each other and their priorities,” he said, adding that employees have found that helping one person’s priorities leads to helping with other projects.

no stranger to innovation

The zoo has a history of using innovative energy solutions.

In 2001, they installed a fuel cell that operated on natural gas. It generated electricity and heated water for the Lied Jungle until 2008. Their current cooling system includes a chiller that makes ice. Cool air created when the ice melts is pushed throughout the facilities during the heat of the day.

“We’re really not heating and cooling as much for the animals as we are for the people,” said Morris, adding that animals aren’t as picky about temperature and can endure more heat and cold.

A good example is in the Desert Dome. There, the visitor path stays within a comfortable range of 70 to 75 degrees. But if a visitor were to step 10 feet out from the path into the exhibit, they would notice the temperature is considerably warmer. Underground coils heat the air.

“It can vary widely across the zoo,” he said. “We control efficiency by concentrating where the cooling is being directed.”

In the Lied Jungle, for example, it’s a matter of where air comes into the building. Temperatures stay balanced by bringing in cooler air at the base of the building and venting hot air from the top.

Then there’s the Scott Aquarium. Morris said it uses a lot of energy because of the amount of water pumped, filtered, heated and cooled.

“All that activity makes (the water) warmer, so we then run it through the exchanger to cool it back down,” Morris said.

One way the zoo is reducing those costs is to install variable frequency drives on the pumps. Timm, director of facilities, said the team looked at dialing back pumping at night so the pumps still move the water but do not really pump.

“The more you back off, the less power you will use,” he said.

The chiller reuses the cooled water pumped through the aquarium.

Thinking about energy usage and sustainability, is becoming more common among businesses, said Lawse. Timm said more zoos are moving in this direction, too. He said sustainability is a constant topic of discussion at zoo conferences.

COO Morris said the OPPD electric bill is one of the zoo’s biggest expenses. But the zoo has found ways to save money every year with these sustainability efforts.

“Everything we save just means we can do a better job with everything else we’re doing here.”