Testing assures the safety of fish near plants 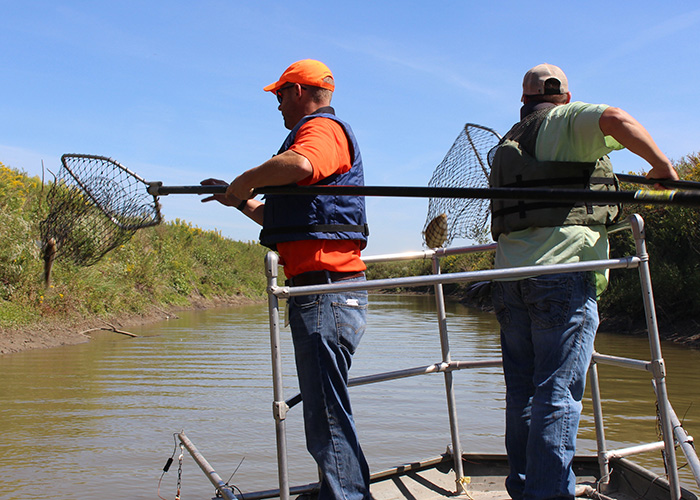 Sitting in a boat trolling along the Missouri River can be a peaceful way to spend an autumn afternoon.

That quickly changes once an electric current enters the water. The fish, jumpy by nature, become even more, well … jumpy.

The Asian carp has been a scourge to many waterways since it first migrated north into the Midwest in the 1970s. It is a large bottom feeder that damages river ecosystems. It is also known to jump out of the water, and even knock heads with unfortunate boaters.

On this day, the fish are extra jumpy.

Once a year, OPPD scientists take to the river to take samples of fish from three different trophic levels. The environmental testing of the fish ensures they don’t show elevated levels of radiation.

A device called an Electrofishing unit does the testing. It sends a high-voltage, pulsing direct current 10 to 20 feet into the water through a submerged cathode and anode.

The fish come toward the boat and temporarily stunned. Finigan and OPPD chemist Ryan Layman wait with fishing nets to collect them.

The fish – eight pounds from each group – are frozen and sent to a lab for testing. The testing must be done each year between May and October, as designated within the Radiological Environmental Monitoring Program.

Flathead catfish, goldeyes, gizzard shad and carp are among those collected for testing.

Testing occurs within one mile of the plant and 20 miles upstream, Layman said.

Along with the fish testing, OPPD also collects and tests samples from a nearby garden, and milk from a neighboring farm. The reason again being to ensure no elevated levels of radiation exist. Like the fish, these samples have never shown any unusual presence of radiation in 40 years of testing around FCS.

The testing complies with regulations placed on nuclear power plants to ensure they remain safe.

Even though FCS ceased operations last year due to economic factors, the testing will continue for the foreseeable future as the plant undergoes decommissioning. During this time, residual radioactivity will naturally decay until the dismantling begins.