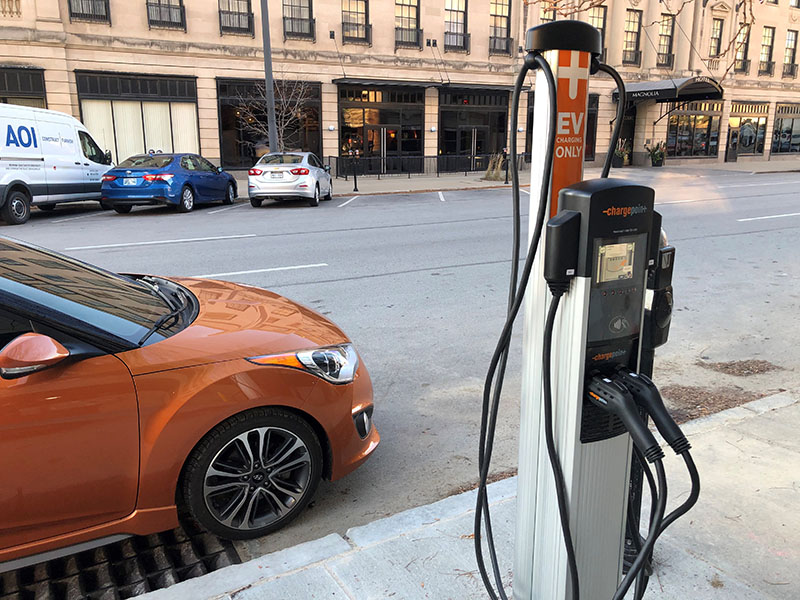 OPPD is planning to add more electric vehicle charging stations around its service territory thanks to a recent grant award and local partnerships.

The charging stations will be in several locations in the metro and rural areas. OPPD officials submitted 10 project sites; five were selected.

The award for the OPPD projects was nearly $600,000, which is about one-third of the total funds awarded in Nebraska. The grants are based on matching funds. The proposed sites are in North Bend, Blair, Syracuse, Omaha and La Vista.

OPPD worked with the Metropolitan Area Planning Agency, the Sierra Club and the City of Omaha among others to secure the grants. Those partnerships, along with the proposed locations spread throughout the service territory, were key to securing the grants, said Karisa Vlasek, coordinator of Grants & Stakeholder Outreach at OPPD. Several local city governments and businesses also partnered with OPPD.

Installing the stations will involve the distribution planning and engineering departments. Site may need upgrades to accommodate the chargers.

OPPD created a scoring matrix using the grant’s narrative and the service territory map. OPPD could then choose sites based on a scoring system Vlasek and Estee created.

Each site has a Level 3 and a Level 2 charging station, which the grant mandated for any highway corridor site. Some older vehicles cannot use a Level 3 charger, which can charge a vehicle in about 30 minutes. Level 2 chargers take hours to provide a full charge.

The Electric Vehicle Charging Rebate program comes out of the Volkswagen settlement fund. Nebraska received $12.25 million in the settlement, administered by the Nebraska Department of Environment & Energy. Recipients must use the funds to reduce nitrogen oxide emissions.

The settlement totaled $2.5 billion after Volkswagen entered a plea agreement. The amount is based on certain diesel models with “defeat devices in the form of computer software designed to cheat on federal emissions tests,” according to the Environmental Protection Agency.