The richness of being an OPPD storyteller

The phone rang at an inopportune time, and I didn’t recognize the area code. But, I never regretted taking that call.

“Your employees, how they protected OPPD assets – it’s quite remarkable,” said the man, who had first introduced himself as a Chicago-based judge for a national corporate communications contest.

“I just read your historic flood issue from front to back,” he said. “I couldn’t put it down. Your utility must have a strong work culture to pull off something like that.”

Shining a spotlight on the important work that OPPD employees did that summer was the intent of that special November 2011 magazine. Through text and photos, that message came off loud and clear, serving as documentation for future employees.

In fact, that’s been one of the best – and easiest — parts of my 31-year OPPD career, which transformed me into a storyteller and historian of the utility. A proud one, at that.

Omaha Public Power District has a rich 73-year history, thanks to its people. And, there’s something special about an OPPD employee, characteristics rooted deeply in our history, transferred from generation to generation. We take our mission to provide electricity to our southeast Nebraska customers very seriously, and together, we do whatever that takes.

I’ve been fortunate to know more than 60 years’ worth of these folks, talking with them in their offices and cubicles, at company roundtables and training sessions, at job sites, at power stations, in their homes, at retiree meetings, in assisted living facilities, and sometimes over the phone – even from as far away as Afghanistan.

There has been an endless well of stories and compelling reasons to share them with our various audiences – employees, retirees and their families; customers; industry peers; bondholders; and others.

Topics ranged from profiles on employees and retirees, stories on company initiatives and performance, heroic storm restoration efforts and mutual aid endeavors as far as New York City, spotlights on commercial and industrial customers expanding their businesses or innovating with energy applications, educational pieces on our fuel mix and our growing renewable portfolio, and countless historic milestones along the way.

In organizing company archives in preparation for my spring retirement, a few common threads surfaced over and over, pointing back to that judge’s comment about the work culture.

The following are 10 stories, out of the thousands I’ve written for various OPPD publications since 1989, and why they struck a chord with me. 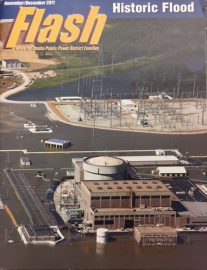 Nothing showcased the dedication, professionalism and resiliency of OPPD employees more than the stories written about the 2011 flood.

From May through mid-October 2011, employees protected $3 billion of the utility’s assets as historic flooding threatened three OPPD power plants, several substations and other key infrastructure.

There was plenty to do and not always enough time in the day to get it done. But employees worked long days, and they took on tasks they probably never imagined they’d have to do – like inspect levees for rodent holes, set up aqua berms, and shoo waders out of contaminated floodwaters that spilled onto nearby land.

In addition, the world was watching, largely due to images of Fort Calhoun Nuclear Station surrounded by water. The situation garnered international attention from reporters, editors, columnists, talk show hosts and others.

It took a team of nine OPPD communicators to handle related work for those who needed it. A 28-page magazine detailed why the flood fight was one for the history book.

The infamous October 1997 snowstorm tested OPPD’s men and women like never before, and it was an exhausting 11 days before power was fully restored. While OPPD took a beating in the public during this storm, the utility launched a rigorous self-examination that resulted in numerous improvements, again showing resilience and deep commitment to the customers we serve. 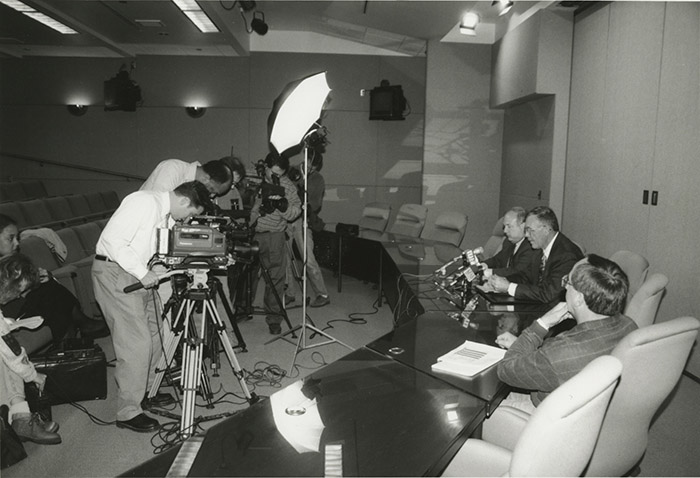 It requires a great deal of expertise to run a utility. This retiree profile told how Reinhard Linder hunted down the original drawings of a famous ship, then laboriously converted the drawings to scale to build a model of it. His home office became a shipyard. He put more than 350 hours into the labor of love, showing impeccable attention to detail. Now deceased, it’s no doubt that Lindner, who retired in 2001 as a senior design draftsman, took such care with OPPD’s transmission engineering projects during his 37 years at OPPD. 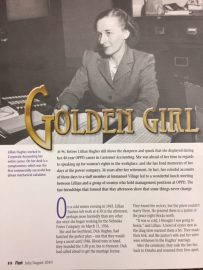 Lillian Hughes joined OPPD’s predecessor, Nebraska Power Company, in 1936, and she retired in 1976 as a supervisor in Corporate Accounting.

At age 96, her ‘passion for the power company’ in conversations with a director of a senior living facility led the director to arrange a meeting with a few OPPD female managers. Hughes told about the trials of women in the workforce back then.

The women shared stories, and Hughes admitted that not everyone liked what she had to say in those days. Hughes beamed with pride while showing black and white photos from OPPD that she had held on to all those years.

The importance of working safely every day remains a constant message. Much utility work requires skill and expertise, and outside distractions can impact even mundane tasks.

Kevin McCormick has led the Safety & Technical Training group for many years, ensuring that employees have the life-saving skills they need, among other tasks. McCormick makes a big deal about taking these safety lessons home. Last year, his wife, Jill, administered CPR on him after he suffered a heart attack. It was a happy ending that continues to serve as an important reminder. 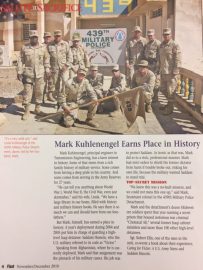 OPPD employees are humble, and the majority never seek out the limelight.

A special magazine issue served as “A salute to sacrifice” in honor of Veteran’s Day that year, and we wrote about several employees who served and continued to serve the nation.

The lead story, “Mark Kuhlenengel earns place in history,” detailed the then-principal engineer in Transmission Engineering. The history buff had earned his own place in history when he was put in charge of guarding a high-level detainee – Saddam Hussein – during a year-long deployment in 2004-2005.

Somehow, that accomplishment remained widely unknown at OPPD until one of the men in his unit published a book about their experience. However, as we were working on the issue, Kuhlenengel was again deployed in the fall of 2010, this time in Afghanistan. Working through his wife, I got a message to Kuhlenengel, who used his weekly Sunday night call to phone me. Aside from that judge’s call, this was the next best work call I ever took.

A story in a special 50th anniversary magazine told how the Home Services Department earned their reputation as the area’s cooking experts, especially as new electric appliances debuted in showrooms. Homemakers, nursing students, restaurant owners, grocers, school teachers and scout groups were a few of the many who looked to them for information on everything from cooking to canning to cleaning.

A pair of retired Home Services women prepared delightful baked goods for that interview. They recalled the waiting lists for their cooking classes, the popularity of their annual cookbooks and how they still fielded calls on how to prepare dishes.

Over the years, numerous OPPD experts have taken the time to explain complex things to me. Such was the case in 1991 when Bruce Hayden, then-manager of Operations in Electric Operations, detailed how critters cause power outages. In 1990, 20 percent of power outages in OPPD’s service area were caused by squirrels, raccoons, birds and other creatures that tampered with overhead lines, underground lines and substations.

The utility always looks for ways to improve, but we honor the past as we move forward.

A series paid tribute to OPPD meter readers as the utility turned to automated technology. While telling how the new technology would benefit the utility and what the transition would look like, other stories detailed the rich past of the role.

“Meter Readers have been the eyes and ears of the District,” said one employee. Others told accounts that further illustrated their importance in OPPD’s history.

We work around the clock so that customers have the energy they need, when they need it. Working alongside account executives and electrical service designers, I’ve spotlighted customers of all sizes doing great things with our electricity.

Henry Doorly Zoo & Aquarium, with other zoos and organizations, launched the Amphibian Conservation Initiative to address globally the fact that many amphibians were threatened with extinction. The initiative included establishing facilities and training staff to quarantine amphibians and carry out captive breeding programs.

In climate-controlled rooms that replicated the animal’s natural habitats, the zoo’s conservation keepers handled the colorful toads and frogs with great care, knowing the importance of their work. Among the energy features: a reverse osmosis system to purify the water, thermal gradient lights to create hot spots to warm them, a pumping system to add mist and humidity, and backup generators to ensure constant power.