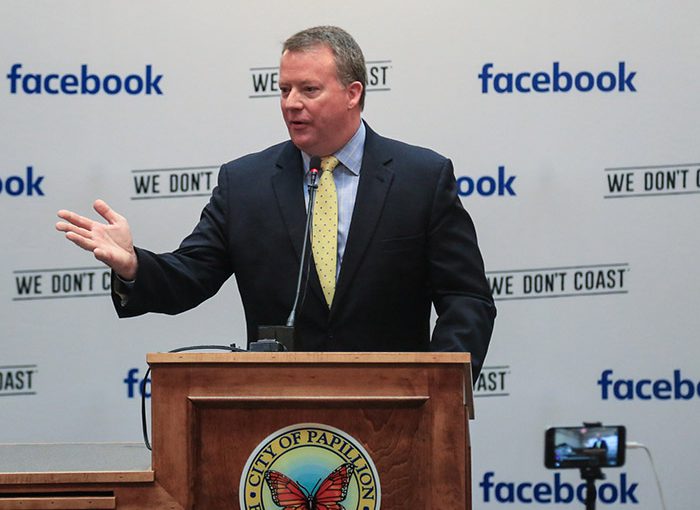 Facebook announced Tuesday, April 4, it will build a new data center south of Papillion, Neb. The company will take advantage of OPPD’s 261M rate, which will help them achieve their renewable energy goals.

The announcement was made by officials from Facebook; Nebraska Gov. Pete Ricketts; State Senators John Murante, of Gretna, and Robert Clements, of Elmwood;  OPPD President and Chief Executive Officer Tim Burke and other community leaders at Papillion City Hall. 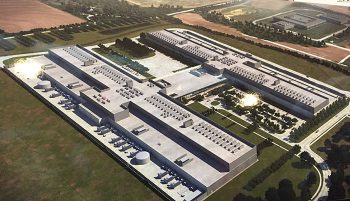 Facebook has said data centers are a central part of the company’s global infrastructure helping them connect with billions around the globe.

The company’s mission is to connect the world, and it is working towards a goal of powering its data centers with 50 percent clean and renewable energy in 2018. OPPD worked to help Facebook get one step closer to that goal. An innovative new rate solution aimed at large electricity users who wish to have high-voltage service was passed by OPPD’s Board of Directors in January.

“Our data centers power our family of apps and services for people around the world — ultimately making the world more open and connected,” said Peter Freed, Renewable Energy Manager at Facebook. “Just like our other data centers, the Papillion facility will be one of the cornerstones of our global infrastructure and will be built to be as sustainable and efficient as possible. It will be one of the most advanced and energy-efficient data centers in the world.

Facebook has other data centers in Oregon, North Carolina, Iowa, Texas, and New Mexico, as well as Sweden, Ireland, and Denmark. 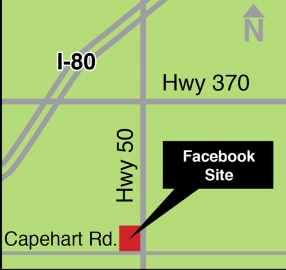 Construction on the site will begin  immediately and be completed in early 2020.

“Partnerships like this, with the state, local communities and utilities like OPPD, cannot be overstated when it comes to economic impact for our region,” said Burke. “We’ve had a lot of success recently when it comes to economic development, and with the addition of Facebook to our region, we will continue to see significant investments and the benefits of these innovative partnerships.”

“The work around developing the high-voltage rate and other work done that helped bring Facebook here is a clear sign of the public power advantage,” said OPPD’s Tim O’Brien, manager of Economic Development. “It’s an exciting time for our region. This rate structure is unique and companies are taking notice.”

O’Brien, who worked at the Nebraska Department of Economic Development before joining OPPD, has worked on several different projects since 2011 to draw Facebook to the area.

O’Brien, Burke and several other OPPD employees made several trips to Facebook’s Menlo Park, Calif. headquarters. O’Brien said it was important that there was a “shovel-ready site,” and thanks to work done by OPPD, the Omaha Chamber, Nebraska Department of Economic Development and the Sarpy County Economic Development Corporation, the project progressed as smoothly as possible.

The team began planning for a project of this size along the Nebraska Highway 50 corridor by completing a site-readiness process led by the Omaha Chamber. OPPD already had upgraded its facilities in the area for growth and to serve Travelers’ new data center.

“It’s a large, steady load that we can count on,” O’Brien said. “That’s one of the reasons data centers are great customers to have. And it is the size of growth that our area can readily accommodate in terms of jobs and infrastructure.”

OPPD will begin work on substation expansion and building a new transmission line to feed the site from a different substation. An announcement on the renewable energy component of the project is expected in the coming months.

This is the first time OPPD has served a customer at the 161-kilovolt level, which is transmission-level voltage, said Tim Nissen, director – Transmission & Distribution Engineering & Substation. The innovative new rate developed in part by OPPD’s Economic Development team helped make this type of service an attractive option. Typically, voltage is ramped down at substations before serving customers at a distribution voltage.

Facebook and OPPD will each own part of the expanded portion of the substation. Nissen said the substation expansion should be completed in 2018.

“Growing Silicon Prairie through the state’s tech industry has been a priority for my administration. Having Facebook select Nebraska for its newest data center campus shows our efforts and those of our partners are paying dividends,” said Ricketts.

After the announcement, Burke and Ricketts talked more about Facebook’s decision to come to the area.