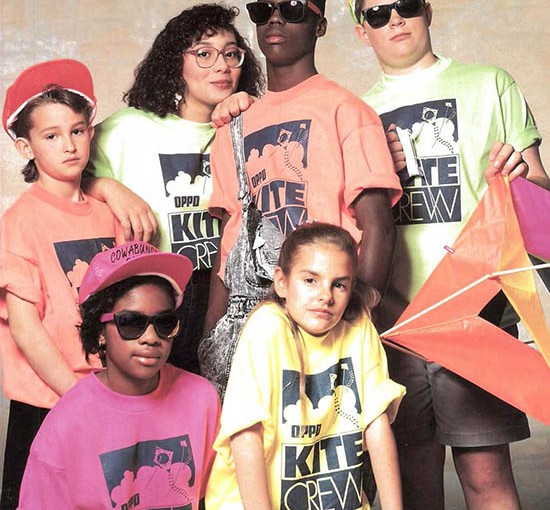 In mid-April 1991, a new rap song exploded on Omaha’s local airwaves. With catchy beats and even catchier phrases, this tune carried a special message.  It was not just a rap song; it was a television commercial that focused on safety and those on screen were the OPPD “Kite Crew.”

The kids were not only featured in TV commercials, but also on posters and print ads.

Pat Thompson, then-manager of Consumer Relations, said in a May 1991 Flash magazine that the effort was part of a new campaign aimed at elementary school students. The 30-second commercial used the music to outline kite-flying safety rules. OPPD hoped the commercial would grab the attention of its target audience, children ages 3 to 12.

“We really want to get our message to the kids. We wanted to talk in their language and make it fun so they would remember the rules,” said Thompson.

With warmer weather just months away, those kite-flying rules are just as important today as they were in 1991.

“The best way to ensure the fun of (kite) flying while reducing the risk is to follow the primary safety rule of kite flying – never fly kites near power poles or lines,” explained Ed Skaggs, then-OPPD safety manager. “The kite safety rules are well worth the time it takes to relay them to our children.”

Get your kite up in the sky.

So you won’t get hurt.

In addition to rehearsals in preparation for their 30-second claim to fame, the “Kite Crew” spent four hours taping the sound track and six hours filming the dance portion of the commercial under hot, bright studio lights.

Mark Miller, who co-directed the commercial, said, “They were really tired after it was over. But, they were very proud to be a part of it.”

As harvest season gets into full swing, it's a good time to review safety guidelines for using equipment around power lines.