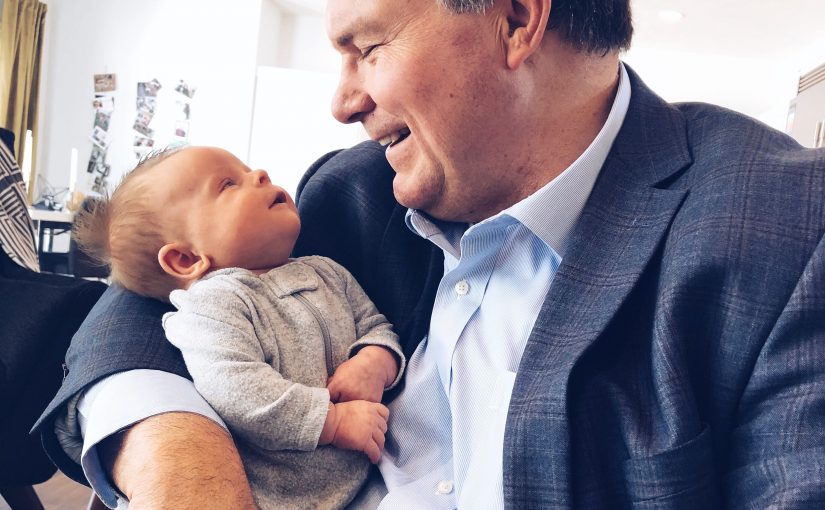 The sight of two-month-old Jamison Bisenius smiling at her grandfather, Kevin McCormick, is surely a sight for sore eyes.

That’s because one month earlier – on Jan. 26 – McCormick suffered a heart attack after clearing snow from his driveway. In the minutes after the incident, his wife, Jill, and daughters Meredith, Reagan and Peyton were told: “it didn’t look good.”

The day of the attack, 57-year-old McCormick, director of Safety & Technical Training for Omaha Public Power District, used a snow blower to clear the driveway at his Elkhorn home. Jill and her sister were going to spend the day shopping, and he wanted the path cleared when his sister-in-law arrived.

He went inside the house to gather information on OPPD’s new insurance administrator for Peyton, who had called on his cell phone. McCormick opened the door to his home office and collapsed in the doorway. There was no warning except for a tornado-like feeling in his head.

Jill, who was sitting on a couch in the family room nearby, heard the loud noise and jumped into action.

“Call 911, dad had a heart attack. Send them to the house,” Jill instructed Peyton on the other end of the line.

Then, Jill used the CPR training that she had learned months earlier. Because of the size of her husband, a former Nebraska football player, and his position in a confined space, she initially struggled to turn him over. He had fallen face-first. Jill called 911 herself and put the operator on speaker. Jill used the wall as leverage to turn him over.

As Jill did compressions, she heard a crunch. She told the 911 operator she thought she had broken his ribs.

Jill said Kevin gasped a few times along the way, but as she pumped his heart, she saw color replace the ashen gray tone that appeared after the heart attack.

Though it seemed a lot longer, the paramedics arrived at the McCormick house in four and a half minutes. They used an automated external defibrillator (AED) two times before getting him into the ambulance and taking him to the Methodist’s Women Hospital, about one-half mile away.

The AED delivers an electric shock to the heart through the chest. According to the American Heart Association (AHA), the shock can stop an irregular heartbeat (arrhythmia) and allow a normal rhythm to resume following sudden cardiac arrest. Cardiac arrest occurs when the heart malfunctions and stops beating unexpectedly. If not treated within minutes, it quickly leads to death.

“He just had a brand-new grandbaby. Keep working on him,” Jill instructed the paramedics as they left.

As quickly as the squad left, the three McCormick girls were also en route to the hospital after Peyton relayed the news. The daughters came from midtown Omaha, Gretna and Lincoln to converge on the hospital.

There, Jill learned the paramedics paddled him four more times after leaving their home. She asked about his condition.

“We sat there and prayed. About 10 minutes later, a doctor came out and said ‘We have him stabilized.’ ”

“I was just in disbelief,” Jill said. When she was able to see him, he said, “Hey, sorry about that. What happened?”

“Everything lined up perfectly to have this outcome,” Jill said, “from my work training, to the firefighters, the doctors and the nurses. I can’t say enough about my employer, Indian Creek Golf Course, for getting us trained.”

Once he was stabilized, McCormick was transferred to Methodist Hospital where a stent was implanted. One of his arteries was more than 90 percent blocked. He stayed in the hospital for two days.

“All of the medical professionals and fire department personnel told us that Jill’s CPR saved me,” McCormick said. “They were shocked I had no memory loss or brain damage, but that’s because she kept pumping blood to my heart and brain.”

Jill added, “I tell him every day that I’m happy he’s here.”

The night before the attack, the McCormicks had convinced their daughter, Meredith, and her husband, Mike, to let them babysit so the new parents could have a night out.

They weren’t gone very long, joked Jill, but the new grandfather had enough time to make a few promises to Jamison.

“ ‘Papa’s going to take you to Mount Rushmore,’ ” was one thing she heard him say to the baby as he held her close. “That’s someplace he’s always told our girls he wanted to take them and they didn’t seem interested but hopefully Jamison will.”

The thought of their granddaughter – and future grandchildren – growing up without knowing Kevin ran through Jill’s head in the minutes following the heart attack.

“You work so hard when your kids are little, and when you get to this point, it’s supposed to be fun. My mom died when Meredith was 3. I know what my kids missed out on without having their grandmother around.”

“He’s the best dad I have ever met, and he’s a really good grandfather,” she said. “He is not a big talker but when he talks the girls really listen and value his advice.

McCormick has had his fair share of eye-rolls from his girls over the years as he imparted his safety and other advice. But, they will likely listen closely now.

“Kevin lives and breathes safety,” Jill said. “His OPPD job is the best job in the world for him.”

Just as he does with OPPD employees, he tells his girls to do 360 walk-arounds with their cars before leaving; he tells them to have their head on a swivel, and he makes sure they always wear their seatbelts. As we drive around the Omaha area he points out the positive things the OPPD crews are doing to keep themselves safe.

“There is always that chirping in your ear. He wants people to stay safe and go home to their families,” Jill said.

McCormick joined OPPD in 1987. He worked in various union and management roles at Fort Calhoun Station before being named executive assistant to the president in 2005. But in 2008, he was named division manager of Safety to reverse a troubling trend of rising workplace injuries.

“Kevin has a great mix of operational background and intentional leadership, but also a personal and professional passion to keep our employees and public safe,” said Tim Burke, OPPD president and CEO.

McCormick built out a safety group that includes more training, more accountability, safety briefings before all meetings, companywide safety stand-downs, and stronger overall safety culture. Among his first tasks was creating the tagline: SAFETY MATTERS – at home, at work, on the road.

OPPD’s safety culture has greatly improved with McCormick at the helm. 2018 saw the best safety record in the utility’s history.

“Kevin has provided exceptional leadership in the development of the Safety & Technical Training business unit,” Burke said. “He also has actively engaged OPPD executives and key business unit leaders in developing key metrics and practices for their respective business units.”

Talking about the incident doesn’t come naturally to McCormick, who admits he’s a private person. But the couple agrees it’s now their mission to tell everyone who will listen.

In addition, they are eating healthier and not sweating the small things. Kevin’s also lost 40 pounds since the incident.

Already, family and friends have heeded the couple’s pleas by getting health checks and learning CPR.

“CPR training is inexpensive and it doesn’t take a lot of time,” Jill said. But the payout, like saving your husband’s life, can be huge.