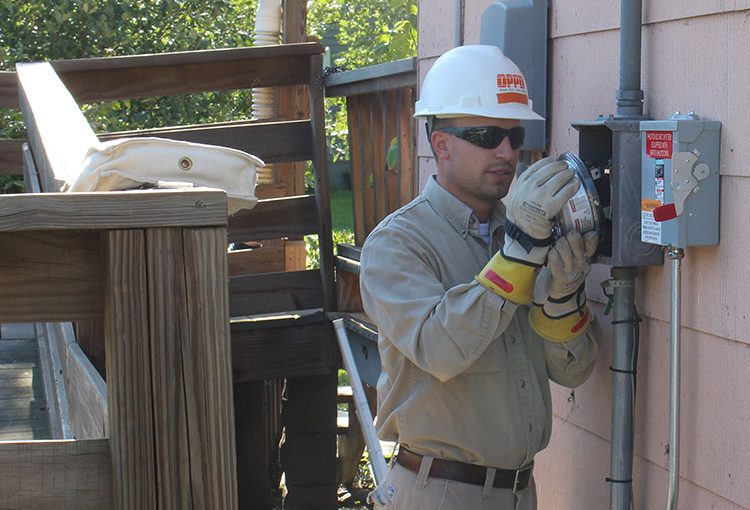 How do you account for 10 years of safe work in an industry known for danger?

For the 11 employees in the OPPD Metering Services department, safety is foremost on their minds. From their pre-job briefings and safety tailgates, to the reminders on some of the equipment they use, that mindset has allowed the group to return home safely each night to their loved ones.

“This group is the role model of safety at OPPD,” said Cheryl Limbach, manager of Distribution Services.

The hazards of working in metering services can range from driving to various job sites, to the daily dangers of working with live electricity. Then there are the rare and extreme incidents, such as customer threatening a technician or getting physical. Nearly everyone in the department can recount that one incident that sticks with them, serving to remind them what can happen.

A recent pre-work briefing illustrated the focus on safety.

After some announcements and items to note by field supervisor Eli Schiessler, the group talked about possible hazards they might face later in the field. The conversation turned to a new invasive plant found in OPPD’s service territory.

Several OPPD field workers saw the wild parsnip, a perennial herb capable of causing the equivalent of second-degree burns, out in the field.

Loren Vogel, a metering apprentice who transferred to the department from Fort Calhoun Nuclear Station, downloaded an app, which he used to identify the plant at a recent job site. Vogel showed off the app and encouraged others to do the same.

“We do this every morning,” said Michael Iwanski, automation technician. “We go over any of the instances we run into so the next person knows if they go into this job or run into this scenario they know what’s out there and don’t get surprised.”

The devices they use in the field have safety screens reminding them to wear their personal protective equipment. Little touches that remind them to be safe are everywhere, Schenkelberg said.

The meter techs deal with the general public daily, and its a part of the job they enjoy. But they know situations can occur.

“You treat people with respect and be aware of your surroundings,” Greene said. “Ninety-nine percent of the time there are no issues. But we are in people’s yards, working on their meters.”

Then there is the constant travel. Being behind the wheel so much means they need to use defensive driving tactics and always be aware of hazards on the roads.

“I’m going 200 miles today,” said Ben Schenkelberg, who like Greene, has been in the department for the duration of the safety streak, “I have calls in North Bend, Schuyler and Fremont, working on irrigation services.”

Greene said all that road time is just part of the job.

“As crew leader, my phone is ringing all the time,” Greene said. “I’m usually going river to river.”

The crews are often called away to help elsewhere, like assisting a troubleshooter with a problem somewhere in the district.

“You get that phone call and it’s on your mind, what the situation is with that next call. But you have to stay focused and make sure you finish what you’re doing safely and correctly,” Iwanski said. “You have to make sure your head is in it so you stay safe, the apprentice who is with you is safe and the public stays safe.”

Ten years without what OSHA calls a “DART” injury – “days away, restricted or transferred” – is certainly something to be celebrated. March marked the 10 years mark since the last DART injury.

OPPD Senior Safety Tech specialist Mike Palmisano does safety training with metering services. He said the group is handling “hot stuff” every day so they must always have heightened awareness.

“They have to be thorough in checking hazards and have that knowledge of what is in that meter socket,” he said. “For that group, it starts with great leadership.”

Palmisano said the group takes training seriously and are always eager to learn. They are genuinely engaged and constantly sharing their experiences. “They are definitely one of the good examples for the rest of the company.”

And during their streak, the group’s performance has been up.

“Safety drives performance,” said Schiessler. “The two go hand-in-hand. There has been a legacy of safety with this group and it is continuing.”