Moving from the gridiron to the power grid 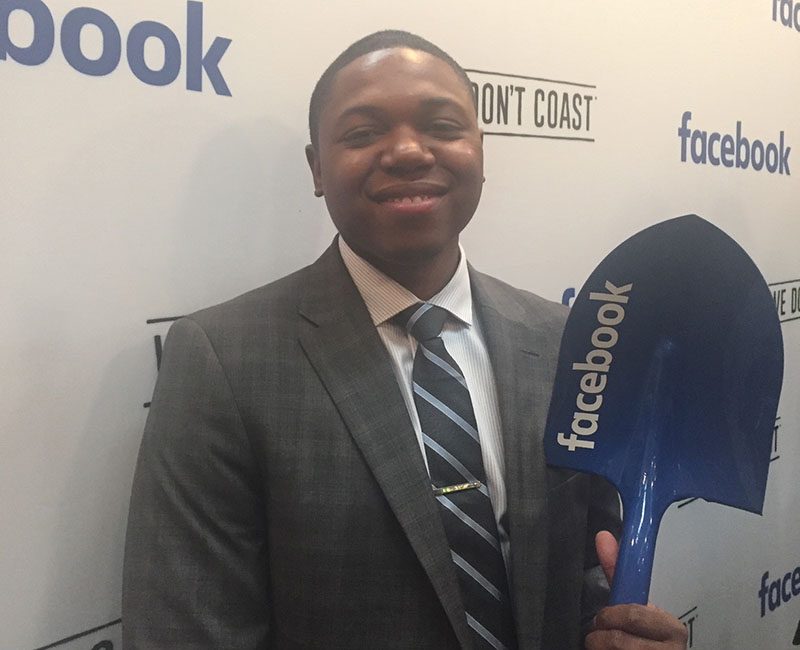 “We were at the Money 2020 conference and James came over and wanted to see what we were all about and get to know us,” Johnson said. “Later our CEO and I hosted a dinner for James, Gov. Ricketts, and the heads of OPPD’s and the state’s Economic Development who were in California on a business expansion trip. When we decided to expand to Omaha, James, who was at the Omaha Chamber, played a big role in our move.”

“James and I have maintained a great working relationship and friendship ever since,” Davis said.

Caraway said he knew soon after landing in Omaha that it was the right decision. Kansas City was another consideration, and it had obvious draws for the Topeka, Kan., native. The couple had visited the Henry Doorly Zoo and local restaurants on trips to Omaha and felt drawn to the city.

Caraway accepted a job with the Sarpy County Economic Development Corporation. Executive director Andrew Rainbolt introduced him to the county board of directors and other civic leaders.

“I remember there were a lot of people in that room,” Caraway said. “It’s hard to describe, but the thing that hit me the hardest was everyone shaking hands. Then (former Bellevue) Mayor Rita Sanders gave me a hug and said, ‘We need you here’, That really struck me. That was a moment.”

Caraway said he worked on big projects right from the start in Sarpy County, including the Facebook data center.

Davis, the Facebook Economic Development manager, said he was always struck by Caraway’s tireless work ethic and strategic thinking. But even more impressive was his ability to build relationships.

“He takes the time to get to know his colleagues and business partners outside of the work that brought them together in the first place,” Davis said.  “This isn’t just networking type banter, James actually cares about the people he interacts with. There’s a genuine and honest nature to James that really sets him apart in his work and you can tell that it stems from who he is as a person.”

Along with the Facebook project, Caraway was particularly proud of his role in brokering the boundary agreement between Papillion and Springfield. Another project was starting the Sarpy County Educator Group.

“We were able to get all the school districts to join the Sarpy Economic Development Corporation, which allowed us to properly inform them about projects that could impact their districts,” he said.

He saw firsthand working in South Dakota how a project could fail if the schools weren’t on board. “I saw how important it was to properly inform the school districts early,” he said. “If they’re informed in the beginning, soliciting their support during the critical parts of a project is much easier.”

Caraway worked five years for the Omaha Chamber, where his focus was on business development. There he worked on projects with Yahoo and Verizon, LinkedIn, Ubiquity Global and lead Facebook’s Community Boost project.

It was at the Chamber that Caraway worked with Johnson at i2c. That collaboration culminated in the company opening an Omaha office in 2018 and creating up to 300 new jobs.

“James is all about connecting people to better the community,” Johnson said. “He helped us tap into the Chamber’s resources where we used their data and research on demographics, millennials and financial knowledge to make our project happen.”

When the chance came to work at OPPD, Caraway said he saw it as a “rare opportunity.”

He got to know OPPD President and CEO Tim Burke and the utility’s Economic Development Director Tim O’Brien.

“I’d worked well with the OPPD team and Tim Burke is so present in our community,” he said. “The chance to work for him, Tim O’Brien and Brook Aken (Manager of Economic Development) and to do that in a public power utility, was such a rare opportunity that it would have been irresponsible for me not to explore it.”

Aken credits Caraway as having played a part in bringing more than $1 billion in capital investment to the region in his previous roles. She said he has “hit the ground running with his charisma, winning attitude and passion for economic development.”

“James is focused on promoting our region and state as a great place to do business and building relationships with site selectors, business and community leaders to support economic development projects and recruit businesses to our region,” Aken said. “Economic development is all about partnerships. James brings great experience from his prior work on a local and regional level in teaming up with entities and organizations to bring projects across the finish line.”

Grid iron to the power grid

Caraway planned on going to law school and practicing business law before learning about the economic development field. He attended the University of Wyoming on a football scholarship, where he played as a cornerback and on special teams. He followed coach Joe Glenn to the University of South Dakota. There, he earned his master’s degree and played his last year for the Coyotes.

Caraway broke his foot a month before the season started and missed a good chunk of the season. “Once the season was over, I had to think about my life after football. A couple months later my wife, Margarita, was activated (she is an Army reservist). So I moved back to Topeka with our six-month-old daughter to be around family. During that time, I got an internship with the city manager’s office and the Topeka Economic Partnership.”

From there, Caraway saw how he could make a difference in communities and people’s lives. Years later, Caraway, his wife and two daughters, Maya and Malaya, are making a home in Omaha.

Caraway’s skills will be impactful to OPPD and the communities it serves, said Nebraska Economic Development Director Tony Goins.

“When you converse with James, he can frame the project, craft the strategy, tactics and then execute on a plan to get the job done,” Goins said. “His interpersonal skills and ability to create trust quickly is above the norm. He has a personality that makes him special.”