December 10, 2018 | Jason Kuiper | how does that work, public power, restoration 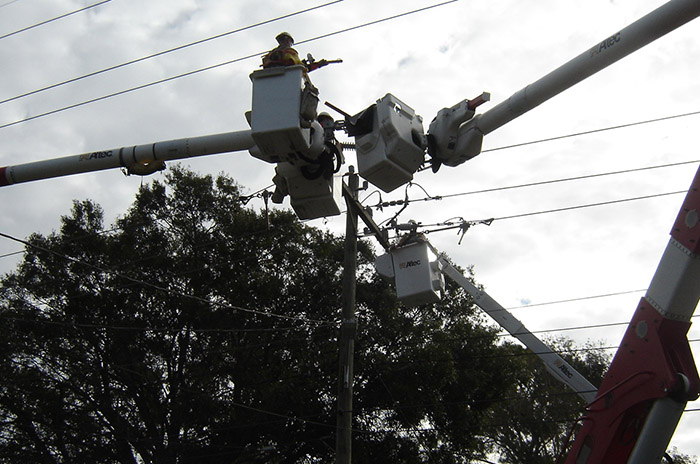 Mutual aid is an agreement through which other utilities offer their restoration services after natural disasters strike and cause widespread power outages. OPPD has been on both sides of the aisle.

Several times, OPPD has needed mutual aid crews to help with restorations. Crews from as far away as Alabama came to help OPPD restore power after the June 16, 2017 storm and tornadoes, which knocked out power to 76,500 at its peak.

Before that storm, OPPD last received aid after a June 27, 2008 windstorm. OPPD crews went to the Minneapolis/St. Paul area in the summer of 2015 to help after thunderstorms damaged that area.

OPPD crews also responded to Hurricanes Katrina and Sandy. In fact, it was Hurricane Sandy that led to changes in how mutual aid works, said Ryan Mayberry, manager of OPPD’s Elkhorn Service Center.

Sandy, which struck the East Coast in October 2012, left millions in 21 states without power. It was clear the industry needed a national response plan, in addition to response on a regional level. The largest utilities in the country belong to the greater National Mutual Assistance Resource Team, and within that group are regional groups.

OPPD belongs to the Midwest Mutual Assistance Group, through which OPPD crews were sent to Florida. Mayberry said OPPD, like many other utilities, belong to multiple mutual aid networks.

OPPD also belongs to: Public Power Mutual Aid Network, which is tied to the American Public Power Association; Edison Electric, which covers the investor-owned utilities; Nebraska Mutual Aid; and a one-on-one agreement with Colorado Springs Utilities in Colorado, among others.

Mayberry said in each mutual aid situation, workers are paid by the host utility that is requesting the aid.

What you need to know about portable home generators

You may be tempted to purchase a generator in the event of a power outage. Remember these tips to operate it safely.

Video: Getting galloping lines under control

OPPD installs air flow spoilers in some spots that can be prone to galloping lines during winter storms.