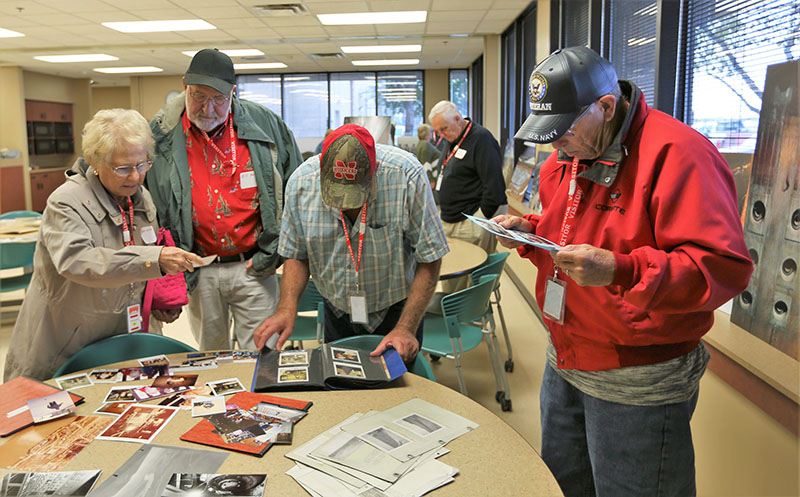 What could power an average Nebraska home for 13 million years? What could keep a 16-watt LED light bulb glowing bright for 1.3 billion years?

The answer both times is the combined talents of hundreds of OPPD employees, past and present, who helped build, maintain and operate two of the district’s largest power generating units: Nebraska City Station units 1 and 2.

These employees recently celebrated the power plant’s anniversary at a special event.

That massive power output, some 1,345.3 megawatts at combined full capacity, has lit homes and bulbs across OPPD’s service territory for decades.

With the hum of the plant in the background and towering stacks dominating the horizon, Station Staff & Operations Manager Ryan Gerdts welcomed the hundreds in attendance and set the stage for the day’s celebration.

Gerdts spoke of the passion shared by those who worked to support Nebraska City Station, both at the site and across the district.

“Who here has been awoken and called out to the plant at night, or on a weekend or holiday?” he asked. Several dozen hands went up. Some spouses chuckled and raised their hands, too. “The question one retiree used to ask when calling people was always ‘Do you wanna come play power plant?’”

Gerdts spoke of that passion and dedication exemplified by workers. They often brave severe weather or sacrifice precious time with their families in order to return the units to service or keep them running smoothly.

“That’s the pride of ownership, then and now, that enables us to meet our mission and provide our customers with the reliable energy they need.”

Gerdts spoke of the thousand-plus years of combined service the retirees in attendance had invested. One of those investors was Jon Hansen, who served as OPPD’s Vice President of Energy Production & Marketing until his retirement in 2017.

When asked, he said the first thing that comes to mind when someone mentions Nebraska City Station is that it’s a rock-solid performer.

“So many dedicated men and women have contributed to that dependability.”

Former plant manager Kirk Miller still lives adjacent to Nebraska City Station, situated along the Missouri River in eastern Otoe County. His proximity made for a short commute during his 13 years working there.

He reflected on his fondest memories, including the challenges of starting up NC2 in 2009 after its construction.

“It was around that time that a lot of the original staff [of NC1] was getting set to retire, so we worked to transfer that positive, operations-focused culture to the crews running NC2,” said Miller.

He noted how the safety focus never changed, and how taking care of people paid great dividends at Nebraska City Station.

“It’s always been a heavy lifter for the district.”