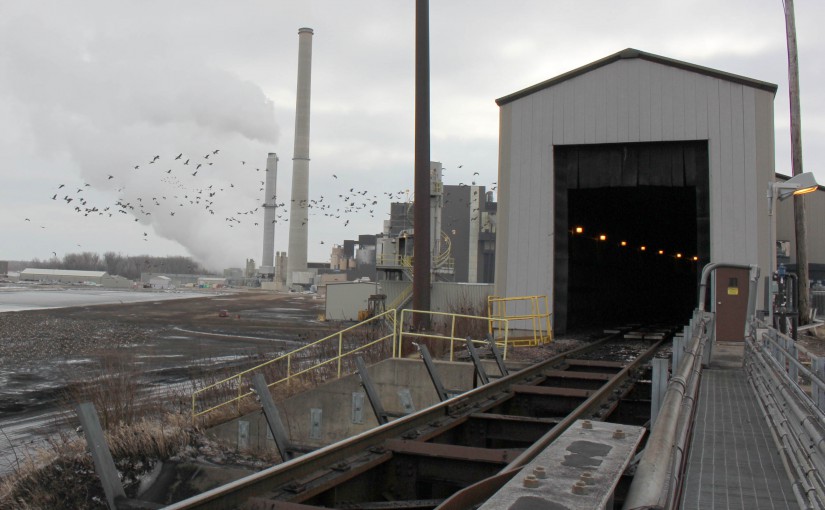 A shed used in winter to thaw the coal in train cars prior to emptying them for use at Nebraska City Station (NCS). As the coal travels from Wyoming, condensation from the moisture in the coal (about 30 percent) – and sometimes rain and snow – can cause the coal to stick together.

Just like when you bake a cake, the train car is lined with a spray to help the coal come out when it gets to the plant.

How does it work?

The shed is the first stop once the train gets to the plant. Train cars move into the shed until they are situated over the heaters in the floor.

The cars are thawed using one of two ways, depending on the weather. During frigid temperatures, the cars move in seven at a time and stop completely over the heaters. They will sit for 15 to 30 minutes to thaw completely. Eric Bender, supervisor of material handling at NCS, said it can take up to 16 hours to thaw a train with 150 cars if it’s really cold outside.

The second thawing method slows the train to about ½ mph and moves it slowly over the heaters. This method is used when winter temperatures are a bit warmer. It takes an average of six to eight hours to empty a train. It can take between 2 and 2 ½ hours to thaw the train using the second method.

HEAT INDEX: When at full-power, the heaters can register at more than 500 degrees. The air temperature inside the thaw shed can be as high as 150 degrees when the heaters are on. At that temperature, crews have to be mindful of surfaces that can burn their skin at such a high heat.

The temperatures are a delicate balance. The coal could catch fire due to its combustible nature if it is heated for too long.

Three-person crews operate the thaw shed and dump the coal. A crew leader in the office oversees the operation while another member inside the shed spots the cars and ensures they are situated over the heaters. A third crew member in the operations tower operates the switches that open the cars to empty them.

OPPD's generating stations and peaking plants are ready for whatever winter has in store.