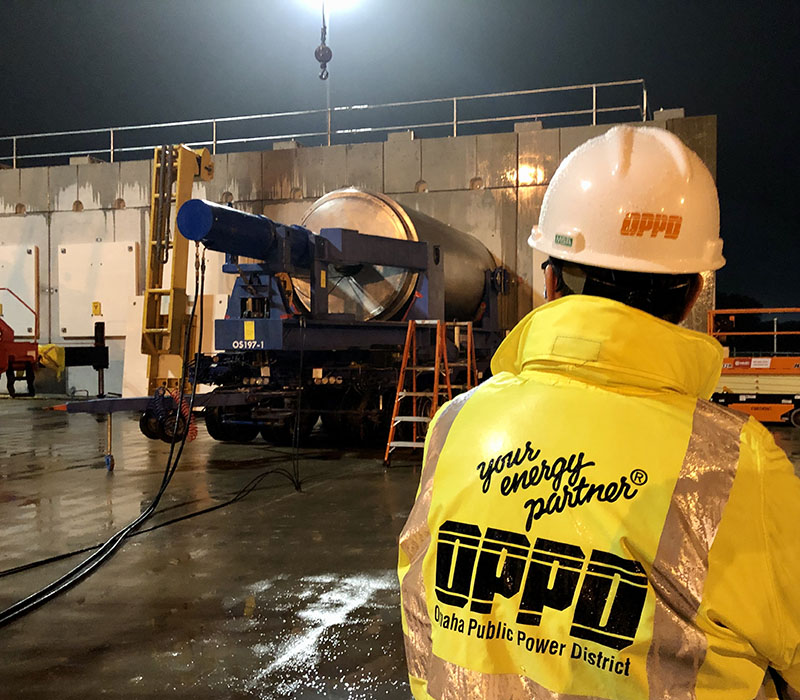 It was a success 47 years in the making. And it was done safely, on time and on budget.

Since first coming online in 1973, Omaha Public Power District’s Fort Calhoun Station – the now-offline nuclear power plant – used enriched uranium oxide to generate nearly 500-megawatts of power. After about five years, the fuel’s potential was depleted and the ‘spent fuel’ was then moved into underwater storage in the site’s 40-plus foot deep spent fuel pool.

Although the volume of spent fuel was relatively small – uranium is a highly dense energy source – it remained quite hot and required constant cooling. After several years in the pool, the normal process for all nuclear power plants in the country is to transfer such fuel into dry cask storage.

Since the plant permanently shut down in 2016 and entered decommissioning, OPPD employees at FCS have worked towards moving the remaining spent fuel into dry casks and onto the Independent Spent Fuel Storage Installation – the ISFSI.

Late in the day on May 13, 2020, the team secured the final canister of spent nuclear fuel inside its massive dry cask storage home, marking another closed chapter in the site’s decommissioning.

Members of the OPPD Board of Directors lauded the success during their May 14 public meeting, noting that the project was done safely and event-free, as well as on time and on budget. They also recognized the men and women of FCS, both current employees and the many past employees and retirees who served at the plant during its lifespan.

In 2016, the Board made the difficult decision to cease operations at FCS due to economic necessity and significant shifts in the energy industry.

Since then, the motto for FCS decommissioning has been ‘Honor Yesterday. Perform Today. Define Tomorrow.’

Reflecting on the bittersweet nature of the fuel move milestone and its place in the site’s five-decade history, one board member remarked, “It was the people that made that plant.”

For the fuel move project, the numbers help tell the story:

An industry-standard practice, the dry casks keep the spent fuel safe, secure and cool until, at some point in the future, the federal government fulfills its obligation to transport the fuel to an interim or permanent disposal site.

Until that time, the ISFSI will remain guarded and monitored 24/7/365. Ongoing inspections and sampling will ensure everything remains in regulatory compliance.

Crossing this milestone helps enable the next phases of the site’s DECON, encompassing both decontamination and deconstruction. This includes the removal of plant components and eventual demolition of some structures.

Current schedules project decommissioning to be substantially complete around 2025.

The dry cask project kicked off in earnest in mid-October 2019. With OPPD leadership and district-wide support, contractors moved an average of one canister each week, adjusting as needed based on resources and demand.

With the onset of the pandemic, project leaders quickly instituted special sanitizing, monitoring and distancing precautions.

The team placed the final bundle into its canister May 8, 2020. The last cask was secured in its storage module the evening of May 13.

With the safe and event-free conclusion of this project, every ounce of nuclear fuel consumed by OPPD’s Fort Calhoun Station during its 43-year service life is now safely air cooling on the ISFSI. What remains is follow-up inspections and some rather extensive paperwork.

“Completing this project safely, on-time and on-budget required a true collaborative effort between OPPD and Orano TN*,” said Tim Uehling, senior director of FCS decommissioning. Orano TN was a contractor for the project.

“This major accomplishment demonstrates the care and commitment of all those involved throughout the project. OPPD’s customer-owners and our plant neighbors can be assured of the continued safe, secure storage of spent fuel at Fort Calhoun Station.”

Video: Getting some help from above with new transmission lines

OPPD is hard at work putting up new transmission lines in southwest Sarpy County, in support of both the utility's Power with Purpose project and the rapid economic growth occurring in the county.