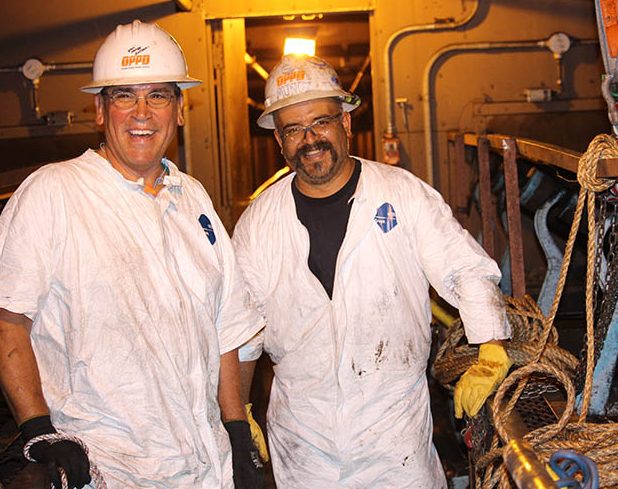 In February 1975, Fort Calhoun Station shut down for its first maintenance and refueling outage. It did not go well, its duration went long and its cost was more than expected. Something had to change.

By the beginning of 1976, workers from different crafts – including steamfitters, general maintenance mechanics, machinists, electricians and more – were joining a new organization: Central Maintenance. At that time, a plan was formed to assist plant workers whenever they take a plant offline for maintenance or have a major project to complete. So far, it’s worked for 40 years.

Jim Rawlings, working crew leader – steamfitter mechanics, remembers the hiring that occurred to fill the ranks of Central Maintenance and staff Nebraska City Station, which was under construction at the time.

“They brought in a busload of machinists from Tip-Top Products,” Rawlings recalled. Rawlings joined Central Maintenance in 1980 after six years in OPPD Operations, and is one of the most-tenured workers in Central.

But Central Maintenance isn’t solely mechanics, machinists and steamfitters. Their ranks also include experts in the areas of rigging and backflow prevention systems that help other OPPD sites.

“We are kind of jacks-of-all-trades,” said Scott Schaefer, supervisor of steamfitter mechanics with Central Maintenance. “We’ll come in to assist and that will let the station maintenance staff do regular work to keep other equipment operating.”

At first, Central Maintenance workers ventured out of their base at North Omaha Station to help during outages at Fort Calhoun Station and Jones Street Station, but their role expanded as OPPD expanded its generation fleet when Nebraska City Station came online in 1979.

Forty years later, Central serves all 17 OPPD units, including those at Sarpy County Station and Cass County Station, as well as the second unit at Nebraska City. It makes for a lot of travel.

“We cover a lot of ground during the year to support the various sites and can have major work going on at multiple locations,” said Keith Morrison, manager of Central Maintenance.

It also can make for a tight schedule.

“We have a committee look at the major work that is needed and then schedule the outages through GEMS, the Generating Equipment Maintenance Schedule,” said Morrison.

But an unplanned outage can throw a proverbial wrench in the works. Central workers are often pulled from one project to work long hours to get a unit back online after a forced outage.

A lot has changed in 40 years. Before 1995, steamfitters and the general maintenance mechanics had different responsibilities. The positions merged that year to become what is known today as steamfitter mechanics.

“It’s all teamwork,” Schaefer said. “Every one of us is dependent on the other.”