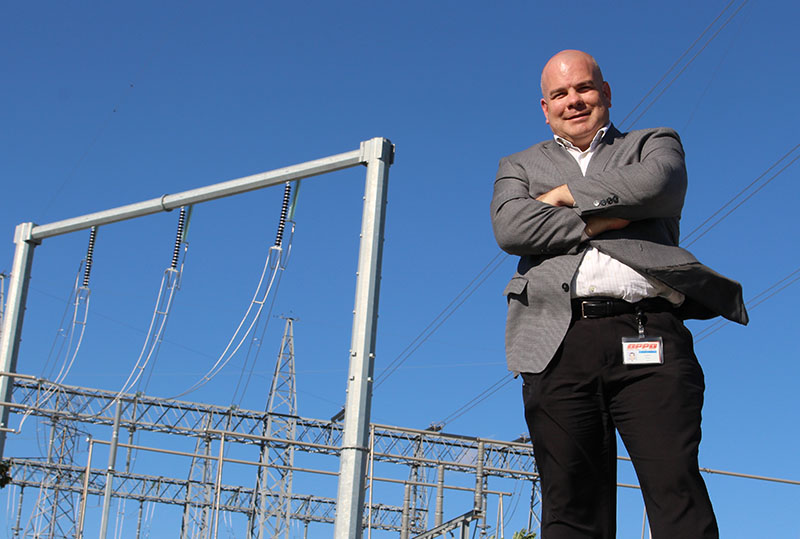 The key to understanding OPPD Substation Engineering manager Matt Eibes might lie in a childhood anecdote.

Young Matt would watch his father, Larry, sitting at their kitchen table telling stories about his workday. Going over the problems he was working on at the factory and sketching possible solutions.

Pretty soon, 9-year-old son was emulating dad. Eibes remembers sitting in the basement or in his bedroom “taking apart” the family’s digital alarm clocks to figure how they worked. Larry would walk him through various parts, showing him the electric components and explaining concepts like “resistivity” as they worked.

“At the time, I thought most of my independent learning was unknown,” he said. “However, Dad often reminds me of the stories and instances which I now recognize as him giving me the opportunity and freedom to learn.”

a home for curiosity

It was at OPPD, where Eibes has now worked for 20 years, that those first seeds of curiosity have fully taken root. All those alarm clocks destroyed in the name of youthful intellectual curiosity turned out to be OPPD’s gain.

Eibes came to OPPD as a summer co-op while attending Iowa State University and worked in the department now known as Protection and Automation Engineering. Now he works to make sure the utility’s substations are safe, resilient and reliable.

This summer, OPPD awarded Eibes with the Award of Excellence. It is the utility’s highest internal award, given each year to the employee best represents OPPD, voted upon by peers.

“I think that award relates to my parents investing the time with me, encouraging my development and also instilling through my upbringing to share time and talents with others to help them grow and develop,” he said. “The Award of Excellence is just a simple reflection on the many individuals that have invested in me and my attempt to, in turn, invest in others.”

Eibes’ days typically include meetings with team members, work on substation projects and time spent focusing on process improvements for his department and others across the utility. Eibes said his role supports OPPD’s residential customers, as well as business customers.

One notable project that sticks out to Eibes was work done to support Facebook’s Papillion Data Center in Sarpy County.

“The entire process was exciting,” Eibes said. “It was a great example of having a group of subject-matter experts working as a team, from discussion to check-out and energization. From the initial design to the energization of that expanded substation – which is providing service to Facebook – it’s a project I’m proud to have been involved with.”

With that project complete and Facebook construction progressing, Eibes is looking forward to the next big project. That would be the “migration from 2D substation design to 3D.”

“I have three team members exploring 3D, which will create greater efficiencies and improve accuracy, along with a number of human performance and automation benefits,” he said.

At home, Eibes stays busy with his family. He and his wife are involved with their four kid’s full schedules of activities: club swimming, softball, baseball, football and Cub Scouts. Eibes is scout leader for his youngest son’s den, and the assistant scout leader for his other son.

So far, no alarm clocks have been taken apart at home, Eibes said. Not yet, anyway. But Legos are a big hit in the Eibes’ home, so you never know.