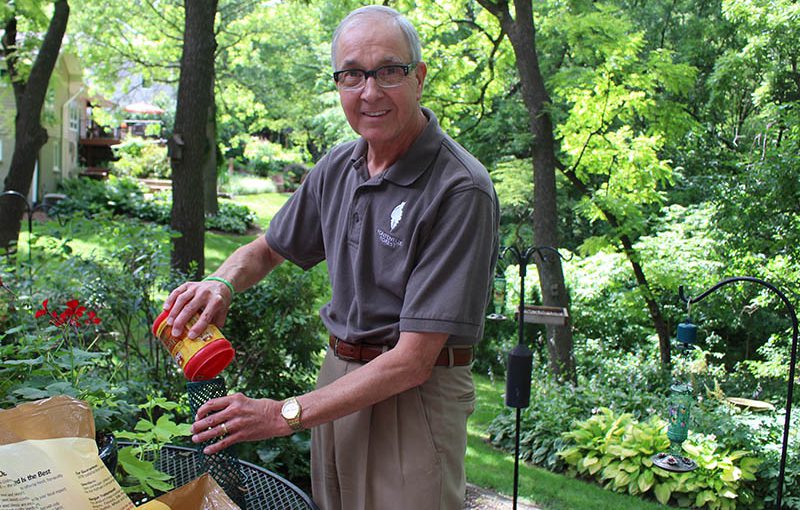 A hike in the solitude of Neale Woods was just what Tad Leeper needed to clear his head after the terrorist attacks of Sept. 11, 2001.

In the days following the event, the OPPD retiree sought out the quiet of the forest during a three-hour hike. All airplanes were grounded. There was no transport traffic to speak of on the interstate. Just silence.

“Somehow, over that period of two to three hours, I had this epiphany that I wanted to volunteer there,” Leeper said. “I just needed to find a way to stay connected in a world that seemed so broken at the time.”

That same day, he went to the nature center and asked how he could help. He had no idea that solitary hike would eventually lead him to serve as Fontenelle Forest’s interim executive director.

The path to that position was filled with hours of dedicated service to the center and a lifelong interest in nature. Leeper has volunteered in many different ways since initially signing up, but most of his time has been spent as a teacher naturalist, which involves leading events for visitors.

One of his favorite activities is conducting night hikes, particularly in the wetlands area. The area is rich with wildlife, which Leeper said practically guarantees amazing encounters for the groups he guides through it.

Besides his work as a naturalist, Leeper has also been involved with the Raptor Recovery Center, which merged with Fontenelle Forest three years ago. He is one of only five volunteers who get to work with the raptors, a privilege that came only after apprenticing for more than a year. He has been a raptor handler for nearly 13 years.

Leeper uses interpretive education to add value to the experience in all of his visitor interactions, with raptors and without. This approach involves talking about the characteristics of the bird, why it’s not releasable and why it’s damaged. He explained that this type of approach makes for more of an educational and conservational experience rather than just entertainment.

“What I’ve found is that asking questions when I’m interpreting with visitors engages them more deeply.”

About three years ago, Leeper was asked to serve as a representative for volunteers on the Fontenelle Forest Board of Directors. There are a total of 150 volunteers of all kinds at the nature center. The position was created to bring the voices of those volunteers into the decision-making process.

By October 2015, Leeper had logged 400 to 500 volunteer hours at Fontenelle by simultaneously conducting hikes, campfire programs, his work with the board and helping at the raptor center.

At that same time, the former executive director left, and the board reached out to Leeper. They asked him to consider taking the position on an interim basis because he already had a lot of the needed relationships. They pitched the position as a part-time job, but Leeper knew better.

After 45 minutes, he was on board.

Sliding into that role was not easy. Leeper faced morale issues among staff and volunteers and vacancies in key staff positions, including fundraising and development.

“That made what was already a pretty daunting proposition feel like a really stiff lift,” he said.

But Leeper drew on his OPPD Human Resources experience to attack each issue head-on. First up was putting a budget together with the finance director. He relied on other directors to handle their respective areas. Then came the nature center’s biggest fundraiser of the year. Without a development director, it was left to Leeper and the forest guild to make the fundraiser happen.

“I learned a lot about development just boot-strapping through that whole process.”

Despite being described as a part-time job, Leeper said his time as interim executive director involved 50-hour weeks from the first week on the job through the last week. But his previous work at OPPD helped prepare him for this role.

“Without the OPPD experience, I would have been way less effective in that role, if effective at all,” Leeper said. “I’m grateful to OPPD for all that I had the opportunity to learn there. A culmination of that came to bear at Fontenelle.”

A new executive director, Merica Whitehall, was selected by the board of directors and began her position in June. Leeper stayed on for about 10 days to assist in the transition. He said that was one thing he learned from his time at Fort Calhoun Station, where management checklists were implemented when new managers were hired. The checklist includes things that need to be explained to the new manager, particularly someone who is not familiar with the organization.

In many ways, Leeper was preparing himself for this role even while working at OPPD. While still working full-time, he was also training to be a nature guide.

“I knew that by retiring from OPPD, I would be retiring into Fontenelle Forest volunteer work,” he said.

Community service is a concept Leeper has been familiar with all his life. His father, a medical doctor, was a “role model for service to others.” The elder Leeper helped found the YMCA in Cheyenne, Wyo., in the 1950s, among other activities. But for Leeper, volunteering at Fontenelle Forest came easy for one reason: “The place so resonated with me.”

And he said that’s important if you want to give back to the community. His advice is to follow your heart and your passion.

“I never went looking for executive director work,” Leeper said, “but I would do it all over again for that place and the people there, for the same reasons I took it on the first time.”

He added he would also return to OPPD again if they needed his help.

“Those are the two places I most love and would go back and help with.”

During his final days as interim executive director, Leeper got a special farewell from a resident of the forest. A deer boldly approached the window and peered in as he cleaned out his desk.