Paying it forward, one future line worker at a time 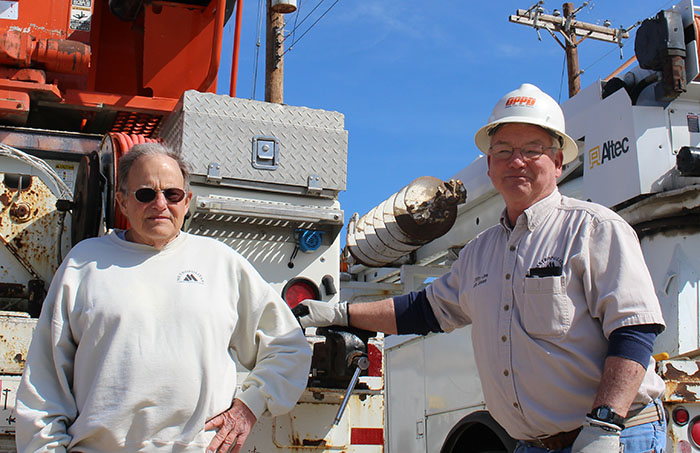 They are silver-haired now and while their pole-climbing days may be behind them, OPPD retirees Butch Clark, Bob Jansen and Rick York still have a trick or two to teach today’s line workers.

Like the wealth of knowledge that comes from more than 100 years of combined service between them, and the lessons from lives spent on the lines. The three men are passing that knowledge onto the next generation of line workers.

The three have spent their retirement years working part-time at Metro Community College as adjunct instructors. Clark teaches in the commercial driver’s license program, while Jansen and York teach in the utility line program.

It’s an enjoyable way for the three to stay involved in the field they were involved in for so many years.

Tim Bowling, utility line instructor at Metro, said it’s great to see the men giving back to the careers that served them so well.

“They just have a wealth of knowledge,” Bowling said. “They are very respected by the students. And they aren’t just great teachers, but great people to be around. They keep their students engaged and help them build the basic foundation for them to start their careers.”

Graduates of the accelerated, one-year program have gone on to jobs with utilities in Nebraska, Iowa, Texas, Colorado and elsewhere.

Derek Kampschneider, an apprentice cable splicer, is one such student. Kampschneider took several classes with Jansen, including an overnight class where they simulate a storm and call in lineworkers at midnight to simulate work on broken poles and lines. The exercise showed the class what it is like to work in less-than-ideal conditions, he said.

“Bob was great and showed us the tricks of the trade,” Kampschneider said. “He’d tell us stories that related to the career and emphasized that it was up to us to look out for ourselves.

“He didn’t just teach us out of the book. He let us know what a good lineman looked like and taught us things that weren’t necessarily part of the class, but knew we needed to know. Like backing a trailer into a dark alley at night in downtown Omaha.”

Kampschneider also took a driving class with Clark and said he helped tailor the class to driving a truck with the trailers and hitches that line workers use.

Jansen remembers one of the first days he spent at Metro.

“We had 10 people to build a three-phase line. I thought, ‘what are we going to do after lunch?’” he said. “But you remember what it was like when you were first starting out.”

Jansen and York said they enjoy their time with the students. And they are proud that graduates of the program now work for utilities across the country, as well as in Nebraska, including OPPD and Lincoln Electric System.

Retired since 2003, Jansen said he likes interacting with the students. He got his first taste of teaching when he was transferred to the training department.

“Working with electricity, doing line work, is dangerous,” Jansen said. “You have to get it right the first time because there won’t be a second time.”

York, a journeyman lineman who retired in 2009 as a field supervisor, said it’s a competitive job market and that OPPD remains the employer of choice for many of the students.

“I enjoy being around young people who are eager to learn a craft that I enjoyed so much,” York said.

Clark, too, said the best part of teaching is the chance to pass on what he learned over the years to the next generation of line workers. Clark retired in 1997. He even taught the son-in-law of a high school classmate.

“You’d be surprised by the variety of people who think they want this job,” Clark said. “It’s great seeing them move on and get a job and make a living. I’ve seen a couple of them years later, and they appreciated it.”

And for the three of them, that’s more than good enough.