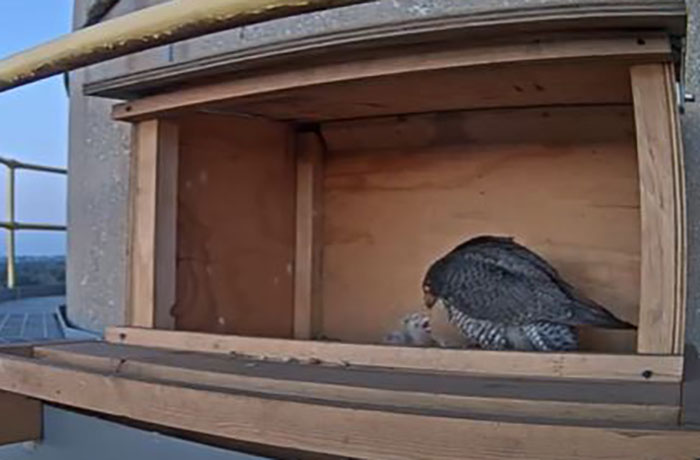 Just this week, at least two chicks have hatched in the falcon box. And mother Clark – yes, she’s a female – and father Lewis have been busy keeping them fed.

There has already been a lot of activity in the box this spring even before the babies hatched. Love lost, siblings reunited, and now new baby chicks. In fall, 2019, personnel at the plant installed a new falcon box complete with a live webcam for Clark, who has taken a liking to the location for several years now. This is at least the second batch of chicks she has raised there.

Observers believe Clark took up permanent residence at the OPPD box in the fall of 2015, eventually settling down with a mate to hatch two chicks.

During the final days of March this year, Clark began to stay inside the box for longer periods, suggesting she was incubating an egg or two. Then, in very late April and early May, the eggs hatched. Now, observers of the webcam can see three fuzzy heads peaking over the lip of the falcon box.

Daily feedings have been constant for the new parents since they hatched. Peregrine falcons share parenting duties. Lewis is a hands-on dad. He shared the incubation duties and is now leaving the box several times each day to hunt for food for the chicks.

The feedings occur with surprising regularity, like clockwork, throughout the day. And there are some sweet moments between Clark and the chicks, including little nudges and gathering the chicks against her chest.

Clark and Lewis, born in 2012, are continuing a large, and long, line of peregrine falcons who originated from a pair living at the state capitol in Lincoln. The parents have been together since 2005.

The Lincoln falcons have three groups of “grandchicks” that have recently hatched. In addition to the chicks in the OPPD box, another group resides at the Woodmen Tower in downtown Omaha, and a third lives in a box at an Evergy power plant in Kansas.

A Facebook group closely following the activity of the Lincoln pair as well as all of their offspring have had a lot to watch in recent days.

“It is pretty exciting having all these grandchicks to watch,” said Jeanne Hibbert of Lincoln who runs the group. “I think it says a lot for our couple that they have so many offspring doing so well.”

Hibbert added the group believes there is another offspring residing at the Mutual of Omaha building as well.

OPPD is working with experts to possibly band the peregrine falcon chicks when the time is right. The chicks are usually banded when they are 22 to 30 days old. OPPD personnel are reviewing the steps necessary to get to the chicks in the box. It sits high on a stack at the plant right now and safety is a top priority for both the people banding the birds and the chicks.

The public will get a chance to name the OPPD trio through a poll on the utility’s Facebook page in the coming weeks. And those interested in the falcons’ activity can watch them every day on the webcam.