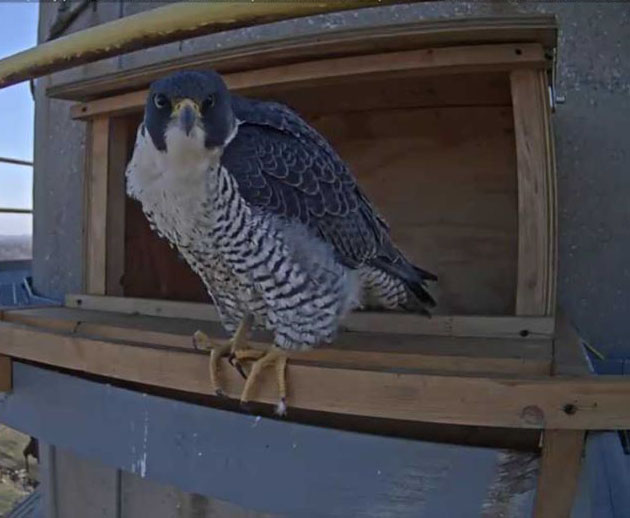 She has a new high-rise riverfront condo, a trendy name, and her own webcam channel. Now she has a new mate.

It’s not the latest episode of “The Bachelorette,” but there has been some soap-opera drama in OPPD’s peregrine falcon nest. And it appears a new set of chicks may make their online debut in a matter of weeks.

First, it is now believed that the resident falcon at OPPD’s North Omaha Station (NOS) facility, Clark, is a female. Peregrine falcon chicks are banded when they are between 22 and 30 days old. Part of the process involves weighing the chicks to determine their gender. Based on her weight at the time of banding, officials believed Clark was a male. That is why she was named after famous explorer William Clark.

Clark and her brother, Lewis, were born at the state capitol in Lincoln in 2012. Lewis will come back later in our story.

In the fall of 2015, a peregrine falcon, who observers believe was Clark, took up permanent residence at the OPPD box, eventually settling down with a mate to hatch two chicks.

Late last year, Clark received a new box to call home, along with an online presence courtesy of a new webcam mounted on the box. Prior to the webcam, employees could only guess as to what was happening in the box, given that it sits high on a stack at the plant.

The webcam has been a high-definition window into Clark’s world. And there’s a group of Facebook users who follow all the action.

“We knew Clark was at OPPD,” said Jeanne Hibbert of Lincoln, who runs the group. “Now with the camera we find that she’s a female and she’s mating with her brother, Lewis.”

We told you he would be back.

Falcon enthusiasts knew Lewis was alive; he was previously spotted in Texas. However, they did not know his current location until he showed up on the OPPD camera.

Hibbert started the Facebook group as a way to document the peregrine falcon pair that live at the state capitol building in Lincoln. Every day she would walk by the building, she began taking pictures of their activity, and then found the live webcam of their nest. At first, the group consisted of her family. Now it boasts nearly 900 members.

The Lincoln peregrine falcons, who have been together since 2005, are special, Hibbert said.

“They’ve fought off a lot of intruders,” she said. “We call them the great love story.”

The male falcon, or Papa as the Facebook group calls him, is a bit of a ham when it comes to posing for the camera at the peregrine falcon nest. It appears Clark has that trait, too. From time to time, the live webcam will show her looking straight into the camera as if posing for a photo.

Hibbert said the grounds around the capitol in Lincoln are ideal for juveniles – a lot of open space and room to land on trees and buildings. To date, six of the Lincoln pair’s offspring have their own webcams.

Including Clark at the OPPD falcon box.

The OPPD camera recently captured a small battle for Clark’s affection – between an unknown male and Lewis. It appears Lewis has “won” his place in the nest, and has been providing a steady diet of birds, mice and bats to Clark.

Spring is a busy time for peregrine falcons. It is when they begin nesting and mating, with chicks hatched in late spring. The NOS peregrine falcon nest has seen a few sets of chicks in recent years, and given recent activity in the falcon box, hopes are high that there will be more.

During the final days of March this year, Clark began to stay inside the box for longer periods, suggesting she was incubating an egg or two. Hibbert explained that once the last eggs are laid, it’s usually about 35 days until they hatch.

But keeping the eggs warm will not only fall on Clark’s shoulders. Peregrine falcons share incubation duties. Lewis will be a hands-on dad. Male falcons are smaller and more agile, so they tend to bring food back to the nest. The females are larger, so they can more easily cover the eggs.

“They will be coming and going more now,” Hibbert aid. “When the babies are born, they will bring a lot more food to the box.”

If and when the chicks are born, the falcons in Lincoln can add a grandchild or two to their list. That pair are 19 and 16 years old, respectively. So Clark comes from parents with longevity. Time will tell if she decides to live at North Omaha Station for good.