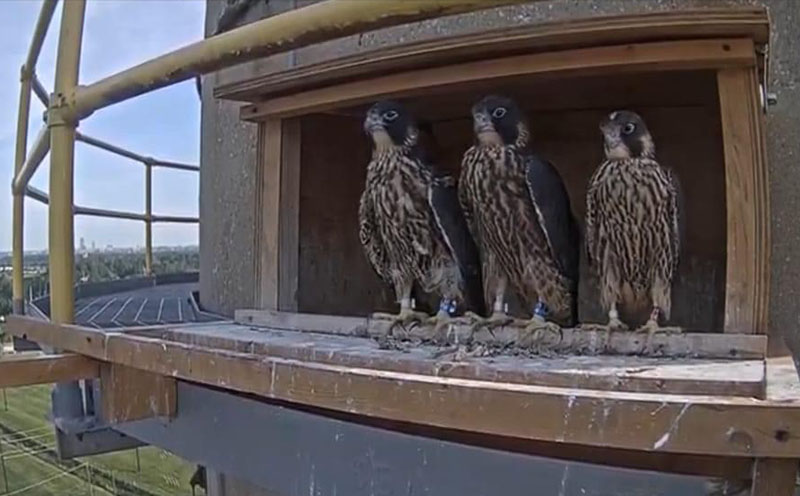 The three, young peregrine falcons hatched at OPPD’s North Omaha Station falcon box are starting to live up to their new names.

For the last couple weeks, the utility conducted a naming contest for the birds, and last week announced the winners on OPPD’s social media channels. Over the course of the contest, 233 votes were cast for five sets of names. The winning group received 106 votes. And the winners are: Flash, Flicker and Storm.

Flicker and Storm will be the names for the two female falcons. Flash will go to their brother. So far, he is living up to his name.

Falcon watchers on an area Facebook page have been capturing plenty of antics from the trio, including food fights and flying attempts.

Flash appears to be the first of the siblings to fly on his own. And he enjoys flying or walking out of site on the box’s webcam. He’s also been known to steal food from his sisters.

The young birds still remain close to the nest and aren’t quite to the point where they can hunt for themselves. Parents Lewis and Clark are still helping with that.

And they are still keeping a close eye on their young offspring. The Facebook group captured video of one of the females attempting to fly, or fledge. As she tottered along the walkway near the falcon box, mother Clark was right behind just in case.

Moving on, moving out

A local falcon expert recently banded and weighed the birds. The bands contain specific colors, blue for the females and red for the male, and a number and letter combination. Now that they have names, those will be recorded with the letter/number combination.

That way, peregrine falcon enthusiasts can track their activities should they show up on a webcam in the future. That’s how Lewis and Clark were first identified. The pair was born at the state capitol in Lincoln.

The three young falcons will continue to master their flying and hunting skills for the next few weeks. Eventually, they will leave the box that has been home since early in May.

Their parents will leave the box, too, and head south for warmer climates as fall and winter approach. But next spring, the pair will hopefully return to the OPPD box and continue to grow their family with another clutch of chicks.