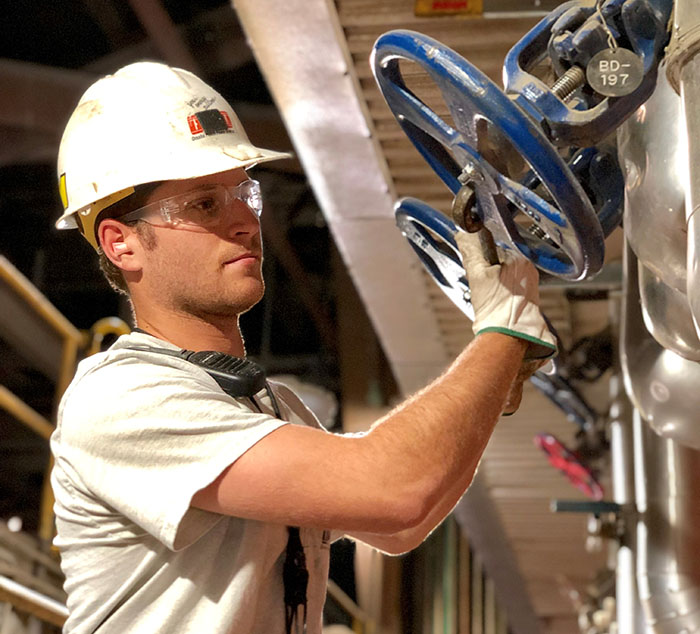 What do you want to be when you grow up?

For young Midwesterners, one possible answer the past decade has been: I want to be a power plant operator.

The path to this important, somewhat unconventional, vocation has been a reality thanks to a unique curriculum offered at Southeast Community College’s Milford, Neb. campus.

Around 2008, OPPD and other utilities partnered with SCC and John Pierce, current director of the Energy Generation Operations program, to develop a curriculum. The goal was to establish a program that, in less than two years, would produce young people fluent in the fundamentals of power generation.

“They split us in groups of about four, along with a facilitator to record responses,” said Kevin Swanson, a maintenance services supervisor with OPPD. Along with 20 peers from Nebraska Public Power District, Lincoln Electric System and others, Kevin sat for two days to brainstorm on just what makes an operator good at their job.

“We wanted to answer basic questions, like what would make an effective operator? What principles should they know? What characteristics should they possess?” said Swanson. “It couldn’t get too far into the weeds, since these kids would likely be coming straight out of high school.

“Most of them wouldn’t know a turbine from a tractor.”

With a heavy emphasis on hard sciences like physics and chemistry, graduates of the associate’s degree program would know general power plant theory, boiler theory and underlying principles like pressure and temperature.

A short decade later, Swanson says he can’t believe how the program has blossomed. Of the most recent group of operators hired by OPPD, more than half came through the SCC program.

“We had to get proactive,” he said.

Seeing the demand in coal-fueled power plants as well as nuclear-driven ones, Pierce took the reins and built the program’s foundation. He brought with him two decades of electronics industry experience and a strong curriculum-development background, and looked to OPPD and others for instructors, equipment and internships.

“Industries have found the program,” said Pierce. He regularly gets calls from paper plants in the northeast, refineries on the gulf coast and water treatment facilities as far away as Alaska and Hawaii, all looking for graduates to hire.

“Operators run a process,” he said. “Flow is flow, heat is heat, valves are valves. Every industry has a process.”

With superb job prospects near and far, it’s no surprise that many students are exploring the growing program. It now has six instructors and a new electricity distribution class. Soon, if the stars and dollars align, it will add an online course track. In total, more than 200 graduates have earned an Associate of Applied Science in Energy Generation Operations.

Pierce noted, “One family has had four kids come through.”

While there’s more than one way to “grow” a talented power plant operator, having people who can hit the ground running helps. They’re also familiar with the rigors of operating a 24/7/365 operation.

“It gives them a taste of reality,” said Swanson, referencing the internship students must complete. For one week each at three different facilities, they work 12-hour shifts, often flipping from days to nights.

Some struggle to adapt and choose to leave the program, while others make positive impressions. Working long, grueling hours while maintaining their composure and quality of work means interns can get a leg-up when the time comes to apply and interview for permanent employment.

However, getting in the door doesn’t mean they’ve made it.

Following a six-month probationary period, new hires have two to three years to complete their systems and operations training and earn their next higher position. Starting as a helper, they become an auxiliary operator, an assistant equipment operator and, eventually, an equipment operator or “EO.”

The word is out about the program, and young people are making their way to SCC by many paths.

“My dad works at Cooper (NPPD’s nuclear plant near Brownville, Neb.) and he told me about it,” said Justin Gren, an assistant equipment operator at OPPD’s Nebraska City Station who graduated from the program in 2017.

He said it the internship was eye-opening. It required him to work long hours alongside seasoned operators, but it was interesting to see what power production was really like.

“You just represent yourself the whole time,” said Gren. “Come here with a good attitude and you’ll get something out of it.”

Networking and solid academic performance helped Gren land the job. But he also had to perform well on the Plant Operator Selection System (POSS) test. The standardized test, developed by the Edison Energy Institute, is used by energy companies to determine aptitude.

“I must have done all right,” said Gren, smiling.