Rainey has a passion to serve locally and globally 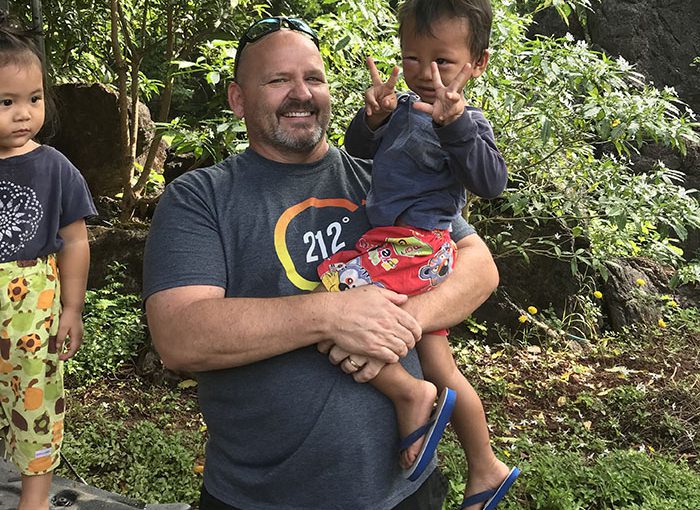 Jerry Rainey is OPPD’s director of Business Partnering for the Human Capital Division. But his concern for people goes far beyond district boundaries.

“The injustice in the world, you want to be part of fixing it,” he said.

Rainey spent 10 days in October 2017 helping an orphanage of Karen refugees in Thailand.

“I’ve been blessed enough that I can give back,” he said.

And he is already making plans to go again in 2018. His trips to Safe Haven orphanage, on the border of Thailand and Burma (Myanmar), are part of Relevant Community Church’s Global Impact Ministry. Relevant is based in Elkhorn.

“We knew that we wanted to do missions, but we didn’t just want to send mission teams all over the U.S. or the world,” Rainey said. “We wanted to pick one place where we could make the most impact.”

Relevant’s pastor, Ronnie Rothe, discovered there was a sizable number of Karen refugees in the Omaha area. They were men, women and children who had fled persecution and ethnic cleansing by the Burmese government.

“The Karen are hated by the Burmese. They come in and they burn out their villages and set land mines,” Rainey said.

According to the Karen Society of Nebraska Inc., this state has the largest and fastest-growing Karen population in the U.S., with more than 5,500.  The refugees are drawn here because of employment opportunities and family ties.

“Seeing the need, we wanted to sponsor some of these folks,” Rainey said. “Help them learn English, get a job, get settled here.”

It was through their work with the local refugees that Relevant learned about a refugee camp on the Thai-Burma border, and Safe Haven orphanage, run by a woman named Tasanee Keereepraneed.

“A lot of kids who have lost their parents in the war have landed in Safe Haven orphanage,” Rainey said. “On a given day, she has anywhere from 60 to 100 kids. We sponsor and basically take care of the kids’ food for the year.”

Teams of volunteers also visit several times each year, interacting with the children, and taking on special projects to help improve their lives, as well as the lives of their caretaker, Keereepraneed, and her family.

“When I first went there, in 2014, all the kids had to eat was rice that was donated by the village,” Rainey recalled. “Today, they have vegetables. They have fruit. They have meat in their diets. All of the kids have been vaccinated.”

Relevant parishioners made all of that possible.

“This last time we went,” Rainey said, “I took a team of five guys and we went and installed a solar system because the electrical grid is so unstable. If something goes wrong, they can spend more than a week without power.”

“When you look at the poles, they’re only as high as a ladder. There are kids, that when the power would go out, they would go and shake wires to try and fix things,” Rainey said. “So, we wanted to give some stability to their system.”

They did that by installing solar panels. “They power lights and small appliances, where their food won’t spoil, and those kind of things.”

A company two hours away from the orphanage donated supplies at cost.

“They came in with their workers, including one who was a Burmese refugee. They set up solar panels before we got there,” Rainey said. “We brought two electricians with us to wire the boys’ dorm, the girls’ dorm, and Tasanee’s house, as well as some outside lighting for the kids, so they can play. It gets darker earlier there.”

Rainey said they also spent some time constructing a new boys’ dorm, “because the current dorm is falling apart.”

They accomplished a great deal on their latest 10-day visit, a trip volunteers paid for themselves through fundraising. And Rainey is already making plans to go back.

“We found another ministry there called the Outpour Movement. They’d like to partner with us to take solar panel systems into the villages of Burma, as well,” Rainey said.

That ministry also sponsors a creative center, with which Rainey hopes to work, which brings hope to children who have endured tragedy most of us could never imagine.

“They take in homeless children, many of whom are found scavenging at garbage dump sites,” Rainey said. “Their lives have simply been about survival to this point. The ministry wants to teach them how to dream.”

Relevant Community Church also plans to help villagers there rebuild a church burned by the Burmese army. Meantime, Relevant, which has met at the Indian Creek golf course since August, 2009, has a new facility of its own under construction. It will open its doors December 2018.

By establishing brick-and-mortar roots, Relevant aims to attract more people, in order to be able to do even more good.

“Going to be there with them (refugees in Thailand) is a reality of how great we have it in our country,” Rainey said. “When I first went, it was like you go to do something. Now, it’s like I go to get something. It’s totally different.”