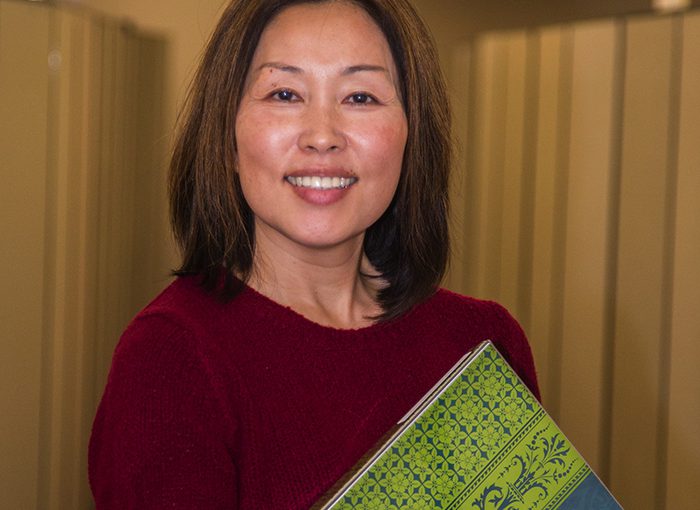 Rieko Ikeda-Hayes is comfortable juggling a variety of projects – whether overseeing a campaign to provide OPPD customers with more convenient payment options or compiling data on trends to improve customers’ experience with the utility.

But her current role as a customer operations technology specialist wasn’t what she initially set out to do.

from japan to blair

Ikeda-Hayes was born in Okayama City, Japan, between Kobe and Hiroshima. After high school, she participated in a summer homestay program, which took her to Oceanside, California.

Her host family was originally from Blair, Neb. That’s how she became interested in Dana College.

Ikeda-Hayes moved to Blair and began college there in 1991. During her senior year, while earning her chemistry degree, she completed an internship at a lab.

“And I realized that may not be the best field to pursue if I remained in the Omaha area,” she said.

Staying here is exactly what she intended to do. This is where she met her husband of 20 years now, former Omaha Police Chief Alex Hayes. And it’s where they would raise their daughter, Rena, now 16.

But Ikeda-Hayes wouldn’t be limited to chemistry careers. Her extensive education opened other doors.

“Using my other degree in mathematics, I made the transition to pursue computer information systems, which led to a couple of college internships at OPPD.” Both times, she interned at Fort Calhoun Station, while working on her master’s degree in Computer Information Systems.

During the second internship, she was offered a full-time programmer position. Her career at OPPD continued to evolve into her current role, where she leads and manages technology projects relating to various customer service aspects – from paying bills to reporting power outages.

She loves the challenges the job presents. “Stretching my brain to work hard and interconnect bits and pieces of information to the bigger picture. That’s rewarding.” she said.

Outside of work, Ikeda-Hayes enjoys playing the piano from time to time, “without an audience.” The lifelong learner hopes to expand her musical knowledge and learn to play the cello. She’s also an avid traveler and reader of Japanese mystery novels.

The whole family has a shared love of golf. “During the summer months, we’ll be found at golf courses every weekend,” she said.

“I’m very proud of who she’s become, and as she continues to evolve as an individual.”