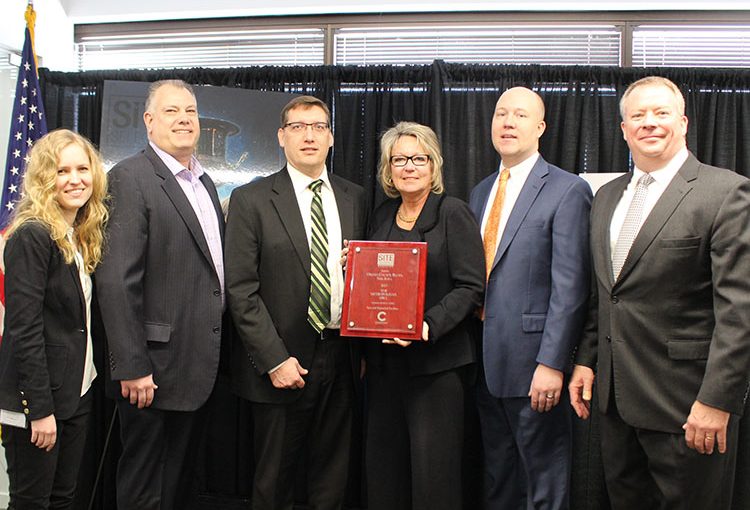 Site Selection magazine is making a trip to Omaha in March a yearly engagement.

The Omaha-Council Bluffs metro area ranked tops for the fourth straight year among cities with populations between 200,000 and 1 million.

Nebraska Governor Pete Ricketts was again presented with the magazine’s Governor’s Cup for 118 new capital investment projects in 2018. Nebraska won the award last year with 108 projects. This is the third consecutive year Nebraska has won the Governor’s Cup.

“It’s a phenomenal achievement and you keep repeating that achievement,” said Bruns. “You have a lot of the factors that matter.”

In talking about the metro area award, Bruns said talent, workforce development and utilities all play a big part in such an award.

“I know OPPD is out here and they are right up in there in the top five in terms of criteria,” Bruns said.

Brown also cited OPPD’s work in his remarks to those in attendance.

“I know Adam mentioned OPPD out there,” Brown said. “I see Tim Burke and a lot of the team that helps us land these projects in this region. Thank you Tim and for your team and the all work you do to make economic development successful here.”

Burke, OPPD’s president and CEO, said partnerships go along with the hard work that makes such awards possible.

“To have this kind of success, and be able to sustain that success, speaks to the teamwork of a lot of different people and organizations working towards a common goal,” Burke said. “These successful projects play a big part in keeping our communities vibrant. We are proud to power those communities and projects.”

Ricketts credited Nebraska winning the Governor’s Cup to its people, its team atmosphere and the cities across Nebraska. A number of Nebraska “micropolitans” – cities of 10,000 to 50,000 people – also ranked high with the magazine. Nebraska was fifth-best in that category.

“This is a wonderful recognition of all the great things we have going on in Nebraska,” Ricketts said.

Tim O’Brien, director of Economic Development & External Relations at OPPD, said he was thrilled about both the state and metro awards. He said

“It shows the power of partnerships and the opportunities that our work helps create,” O’Brien said. “We work to support existing business, attract new business and enhance the business environment.”

O’Brien said OPPD supports these efforts in a variety of ways such as innovative rates like 261M. The rate played a major part in Facebook’s decision to come to the area. O’Brien said OPPD’s partnerships include working with area counties and local community organizations to make sure the area is ready for businesses that are enhance the communities.

He pointed to the utility’s site development initiative as an example of OPPD teaming up with others to make sure there are “shovel-ready” pieces of land for development.

“We have a good range of companies choosing our area,” O’Brien said. “Biotech companies like Veramaris have come here along with a number of data centers, including Travelers and Facebook. Our team works hard to help businesses.”

Site Selection is a 65-year-old, Atlanta-based magazine. It is considered the senior publication in the corporate real estate and economic development fields.